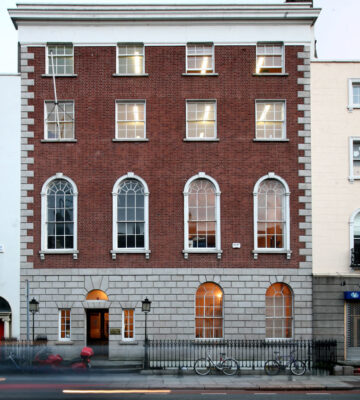 Pat Murray will lead a tour to the Royal Irish Academy of Music, Westland Row which was built in 1772 by Nicholas Tench under the terms of his lease which stated he build “four good and substantial dwelling houses.”  The Academy acquired No. 36 in 1870 from Henry de Burgh for the sum of £2,000. After the RIAM, members will have a tour of the Leinster House, former residence in Dublin of the Duke of Leinster designed by Richard Cassels. Now home to Dáil and Seanad Éireann. The group will be joined by Senator David Norris and will conclude with a lunch in Patrick Guilbaud’s Restaurant.