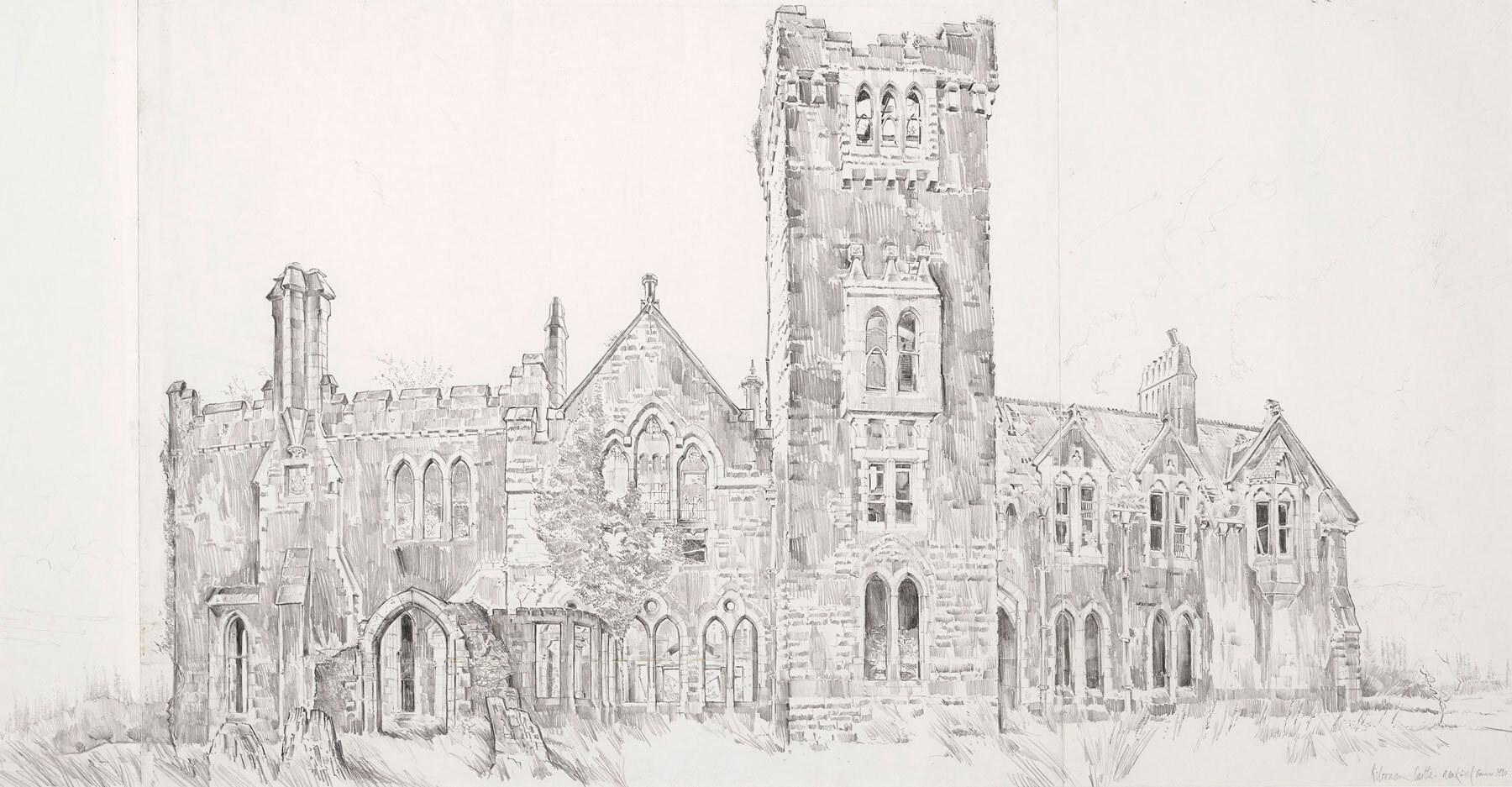 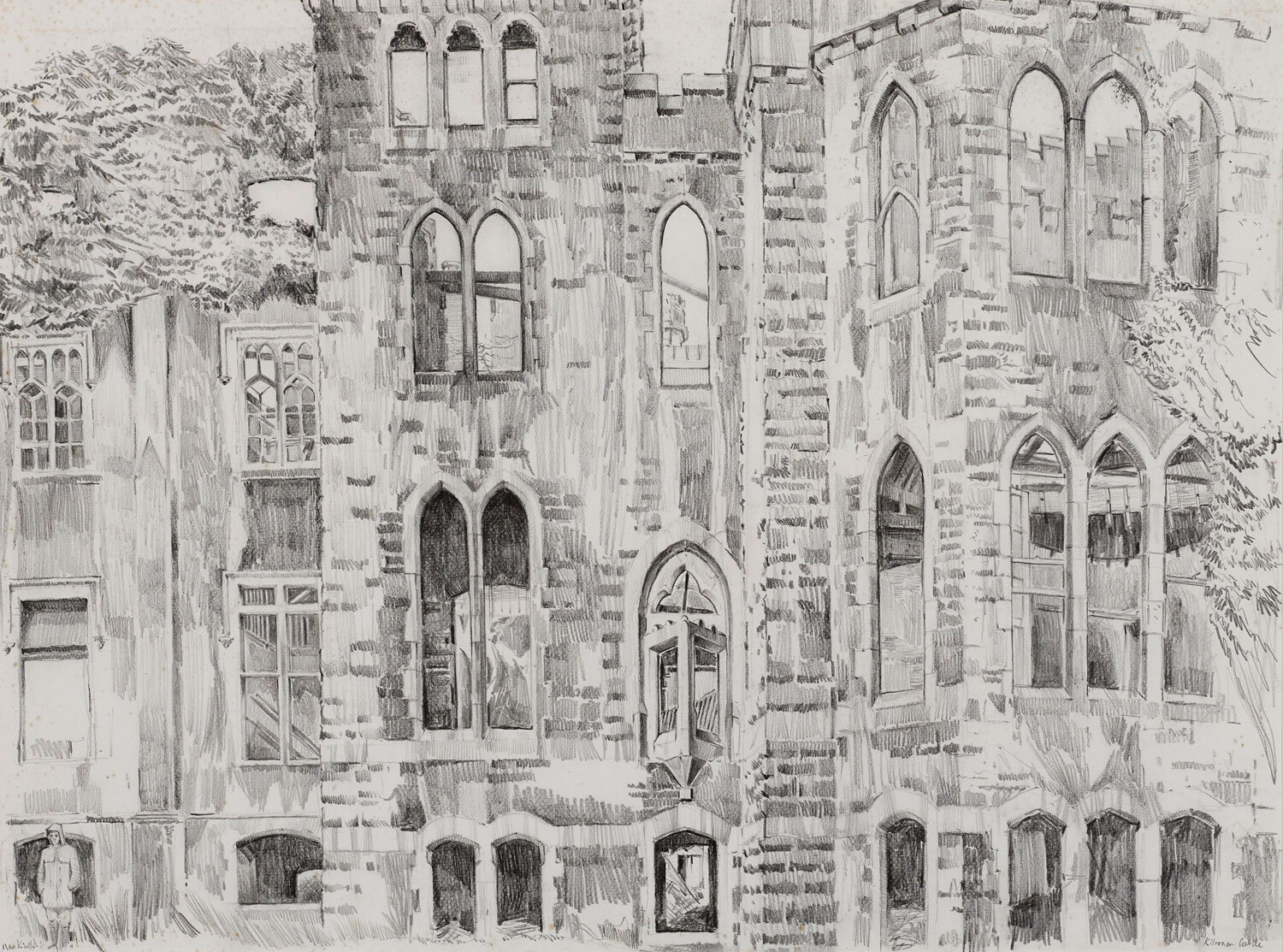 Something of a High-Victorian Gothic horror near Keadue, positioned on vast lawns extending down to Lough Meelagh, on ‘one of the most glorious sites for any country house’. It is difficult to deny the sense of overhanging gloom, sadness and grim decay captured in these two drawings, showing the castle in ruins, its plight offering no sense of the sublimity its deeply picturesque setting deserves. Built in at least three stages, there is at its heart an overblown Regency Gothic-Revival castle, known originally as Castle Tenison, now evident only on the south elevation and with just two bays with their Perpendicular windows visible to the left in Nankivell’s more detailed view. Strange for its squareness, its rigidity, and delicate features, nineteenth-century photographs suggest it was a rather unsuccessful effort to re-attire the mediaeval massing of a Castle Rising or Norwich in lithesome Regency detail. Begun in 1813 and completed in 1815, the building was overseen by John Lynn, an English carpenter sent by John Nash to act as clerk of works at Rockingham, eventually becoming the executant architect there after Lord Lorton’s relationship with Nash ended acrimoniously. There is an unmistakable Nash-like quality to Lynn’s castle - confirming the observation made by Thomas Bell, that exposure to Nash ‘transfused into his mind the theory of his profession, and converted him into an architect’. This evident especially in the division of the bays with thin wall buttress rising to finials, the use of distinctive super-mullioned windows and the curious slot-like attic windows which all bear a striking similarity to the expression of the dining room projection on the west front of Nash’s Aqualate Hall, Staffordshire completed in 1809.

Lynn had been recommended by Lord Lorton to Thomas Tenison, the husband of his aunt, Lady Frances King, a daughter of the 1st Earl of Kingston. The new building was completed in the year of Tension’s second marriage in 1815. His son, also Thomas, seems not to have spent much time there, and after his early death in 1843 the property passed to his brother Edward, who renamed it Kilronan in ‘deference to the old associations of the place’. As a younger son Edward King Tenison (1805-78) first pursued a military career, later exchanging it briefly for politics (MP for Leitrim 1847-1852) and in 1838 made an advantageous marriage to Lady Louisa Anson, eldest daughter of Thomas, 1st Earl of Lichfield, Both shared a keen interest in photography and travel, he helping to develop some of its earliest techniques to perfect views of buildings and scenery, while she also enjoyed painting and having travelled in the Holy Land and Egypt, gained a reputation as a travel writer and artist with her publication of Sketches in the East (1846). It seems that on their return to Roscommon in the 1850s after an extended period abroad, they contemplated major works to Kilronan, including by the English architect, antiquary and painter John Chessell Buckler (1793-1894).

Among Buckler’s drawings are a number of schemes for Kilronan, one of these proposing a relatively modest Tudor-Gothic porte cochère over the existing entrance, and the addition of a large flag tower to one side, similar to what is seen here today. It remains unclear how far any of Buckler’s schemes were pursued, if at all. In 1872, coinciding with the marriage of their younger daughter Florence to her cousin the 8th Earl of Kingston, a more ambitious remodelling was planned by Thomas Newenham Deane (1828-1899) which largely resulted in the spreading High-Victorian castle with its signal tower and multitude of gables, built across the entrance front of the earlier block. Deane shared with Louisa Tenison an interest in painting, exhibiting regularly at the RHA. However shared passions did not overcome their disagreements over the work at Castle Tenison and by 1877 he had been replaced by James Franklin Fuller whose hard Gothic aesthetic is evident in the more earnest, rock-faced treatment of the bay windows that dominate in Nankivell’s second view.

The Tenisons’ enjoyment of the finished building was short-lived, Edward dying at Kilronan in 1878 and Louisa, in 1882 at Trieste. Kilronan was subsequently inherited by Florence and Henry, the Earl and Countess of Kingston. After a sale of the contents by their son, the 9th Earl, in the 1930s, the estate was acquired by the Land Commission and in the 1950s, the castle having been sold on was dismantled. It remained ruinous until about 2005 when it was transformed into an hotel, the works including the addition of a thumping great block to one side, nothing more than a monstrous and failed effort to emulate Lynn’s original 1815 block.