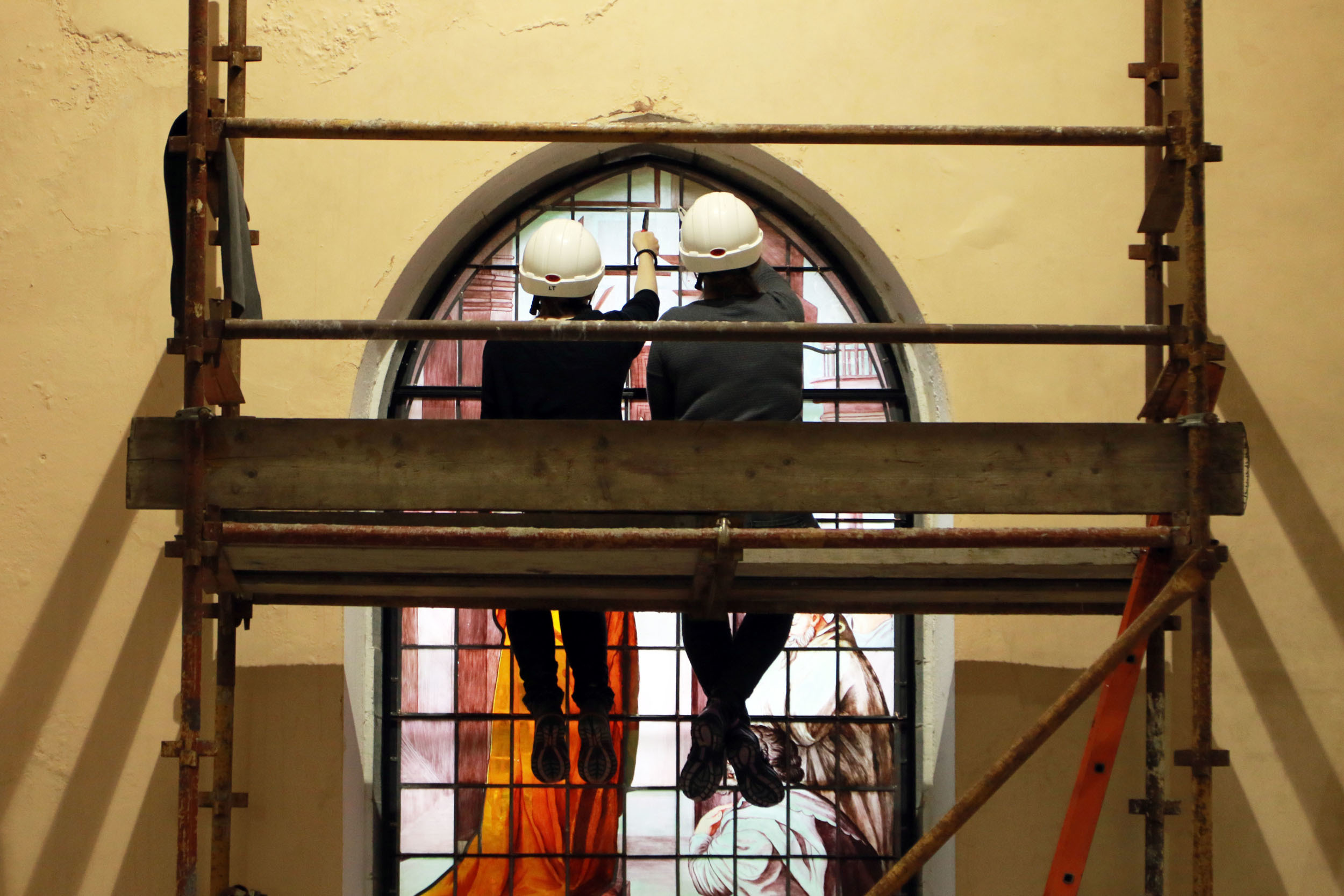 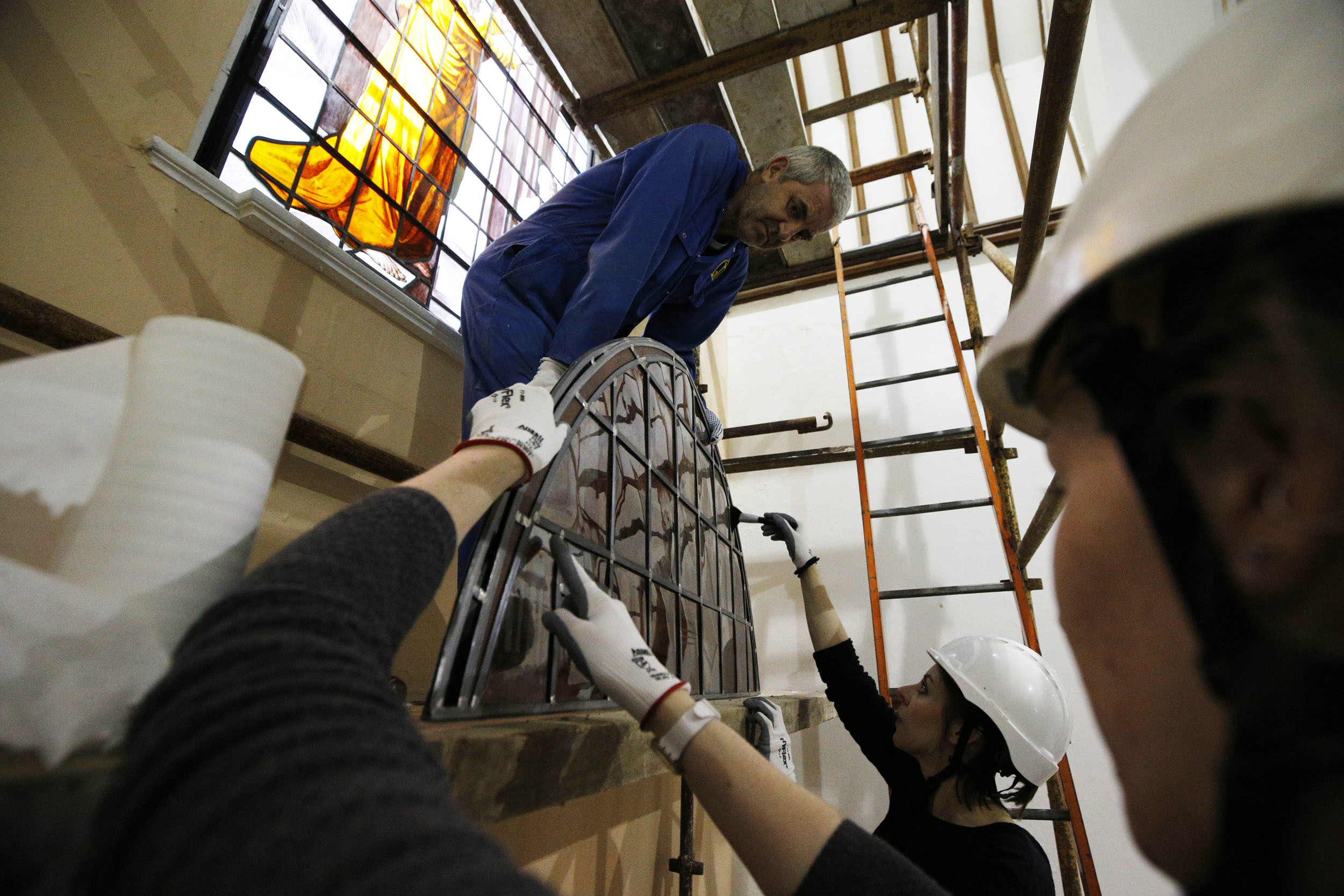 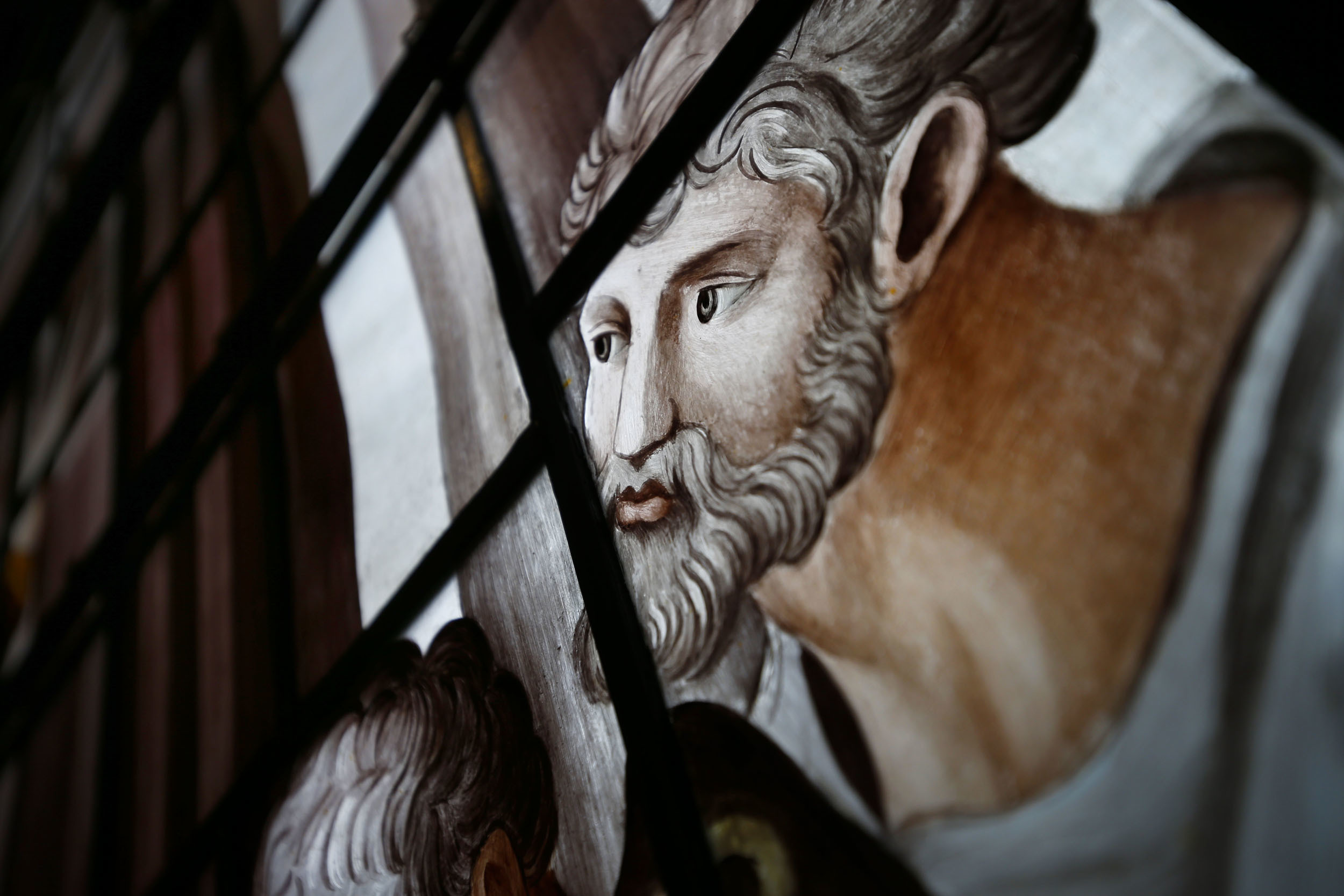 The church window in Agher Co Meath, came to the notice of the Irish Georgian Society (IGS) when an application was made to the Conservation Grants Programme, funded through the IGS London Chapter to support the conservation of the window. This grant enabled the preparation of a Conservation Report, detailing and costing the works required.

The East window of Agher Parish Church is an interpretation of a 16th century cartoon by Raphael, of St Paul Preaching to the Athenians, now on loan to the Victoria and Albert Museum in London.  The church window, believed to date from c1770, was the work of Dublin born stained glass painter, Thomas Jervais, who moved to London during the later 1770s, where, together with his brother, he developed a prosperous business, supplying the domestic market and receiving Royal and Oxford College patronage.

The window was commissioned by the Wellesley family for their home Dangan Castle nearby, now derelict.  The first Duke of Wellington born in 1769, was brought up there, before the house was sold in 1793.  Following a fire in 1809, the window was moved from Dangan Castle to Agher church built by the Winters family of a nearly estate; it is one of the oldest extant stained glass windows remaining in–situ in Ireland.

Other patrons of Jervais in Ireland included the Duke of Leinster (for Leinster House) and Lord Charlemont at Marino, but no works are known to have survived. Only three monumental works by the artist are believed extant: the New College Chapel ‘Seven Virtues’ window in Oxford; to the design of the renowned artist, Sir Joshua Reynolds; a window in Carrickfergus and the Agher Church window. The east window of St George’s Chapel in Windsor, commissioned by George III, to designs by Benjamin West, was removed in 1862 by the Victorians and has been lost.

Technically, the window was experimental, exploring the use of techniques and overlaying thin (1.2mm thick) sheets of coloured glass, to achieve the vibrant colours of St Paul’s robes.  Jervias’ later work in England demonstrates a progression in technique and style no doubt attained from his associations with other artists and stained glass painters in London.

By 1992, the window was in poor repair and in imminent danger of collapse[1].  Its survival for the next 24 years was aided by three panels of textured glass on T bars. However, the orange peel texture of the glass, the location of the bars, which cut indiscriminately across the faces of the Athenians, together with the lack of ventilation behind the glass and subsequent build-up of mould and dirt all detracted from the visual appearance of the window, as well as endangering its ongoing survival.  Current best practice calls for a combination of iso-thermic glazing and a suitable ventilation gap, with the stained glass window set into a purpose-made frame in front, to minimise thermal fluctuations and avoid the development and build-up of mould and dirt.

In 2014, a funding application was made to the Irish Georgian Society to support the conservation of this window.  The Society’s involvement began with the identification of suitably qualified professionals and subsequent preparation of the requisite Conservation Report, undertaken by York Glaziers Trust, due to the lack of suitable Irish based expertise.  Additional funds from the Irish Georgian Society US chapters in Chicago and New York were pledged for the conservation work itself and together with funds from the Department of Arts Heritage and Gaeltacht’s Built Heritage Investment Scheme 2016, promoted by Jill Chadwick, Conservation Officer with Meath County Council; the current Duke of Wellington; the Primrose Trust and the Heritage Council have enabled the works to finally be commissioned in early 2016.

A commitment to involving and upskilling Irish-based conservators was facilitated by links between the York Glaziers Trust and the University of York, where Meath born conservator Emma Newman was due to undertake her MA studies in Stained Glass Conservation and Heritage Management.  Initial reluctance on the part of the DAHG to permit the export of the window for conservation, which led to the delay of the project and the loss of funding under the Structures at Risk 2015 programme, was overcome by achieving sufficient funding to enable the window to be repatriated and re-instated within a six month interval, timed to facilitate Emma Newman’s placement and a temporary export permit was issued by the National Gallery of Ireland.

The window was removed on April 25 2016 and packed in specially constructed cases by a small team of three conservators, Laura Tempest, Tony Cattle and Emma Newman, templates of the window opening made and the opening temporarily blocked.  Thereafter, the window was carefully conserved in the York studio, the glass cleaned and re-leaded and a new frame constructed.  The original glass was finally repatriated during the week of 15 August by the same team, who worked first to install the iso-thermic protective glazing into the original opening, thereafter fixing the new frame for the original window, before finally slotting the three glass panels into their new position and triumphantly securing it in place.

The newly conserved Jervais window was back in-situ in time for Heritage Week 2016 and was joyfully celebrated by a ‘Songs of Praise’ service during Sunday and during an Open Day.