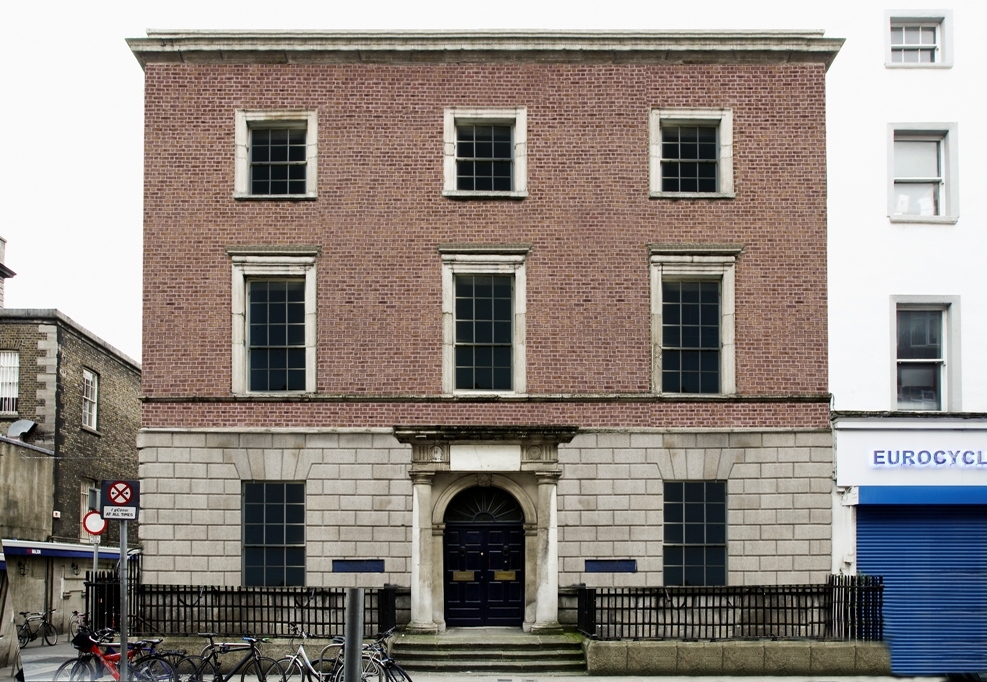 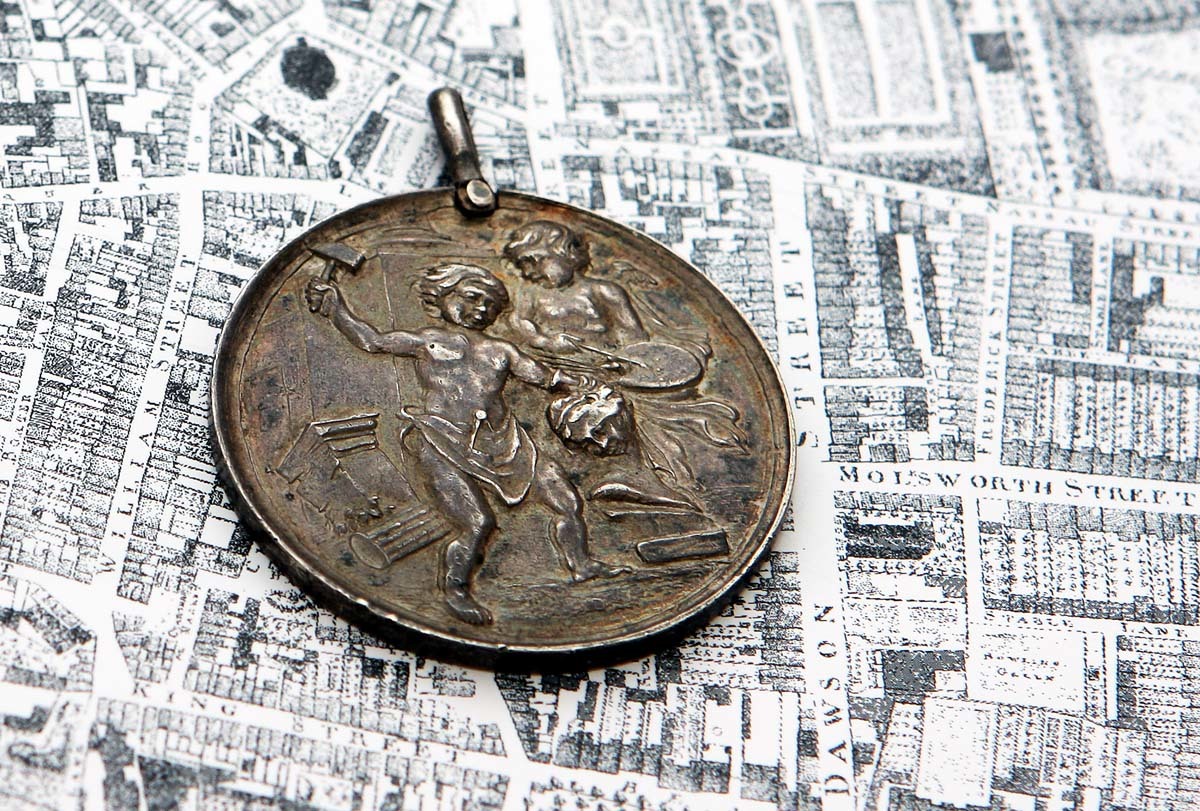 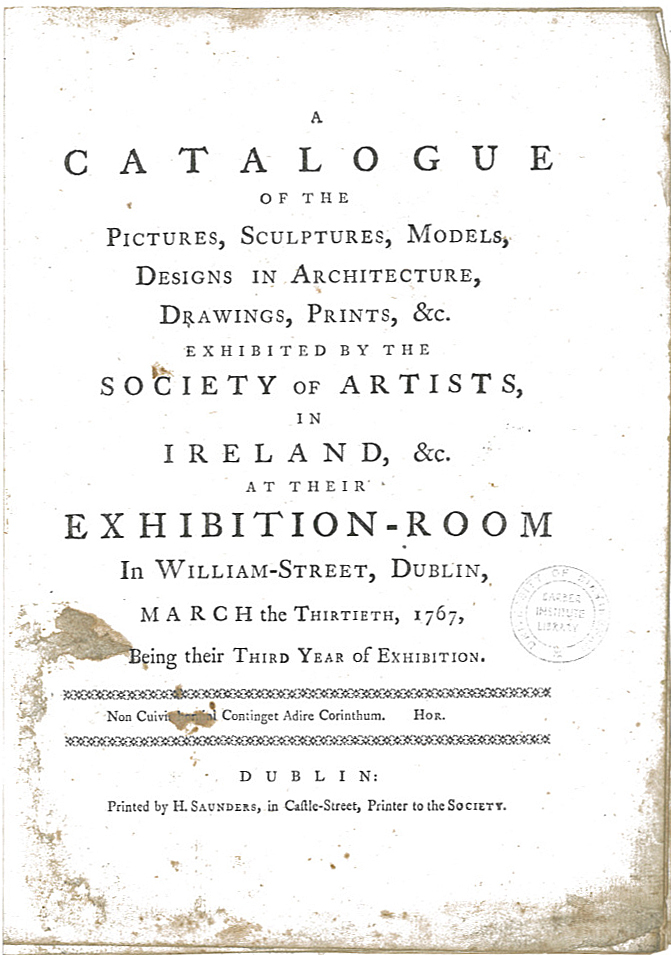 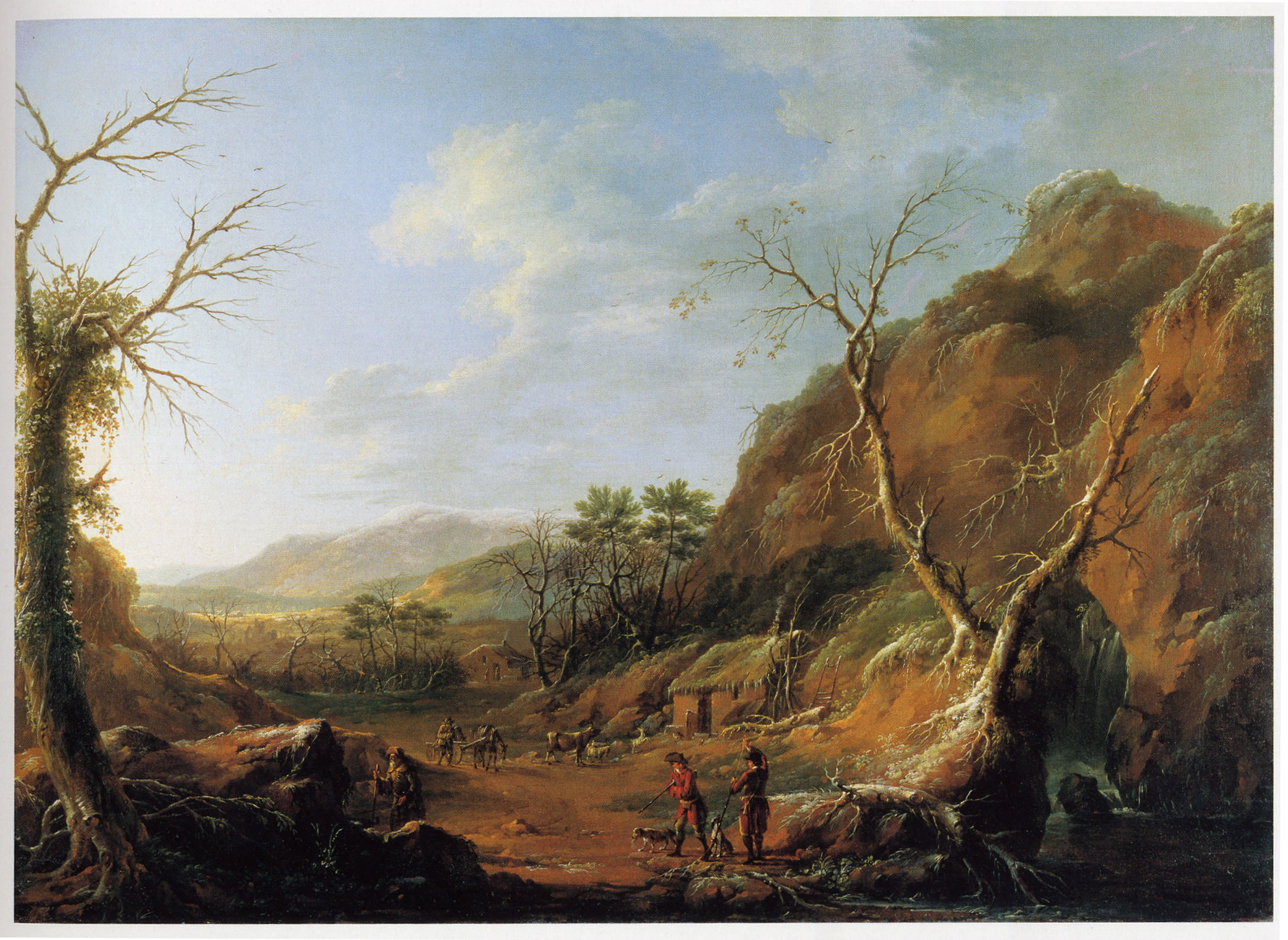 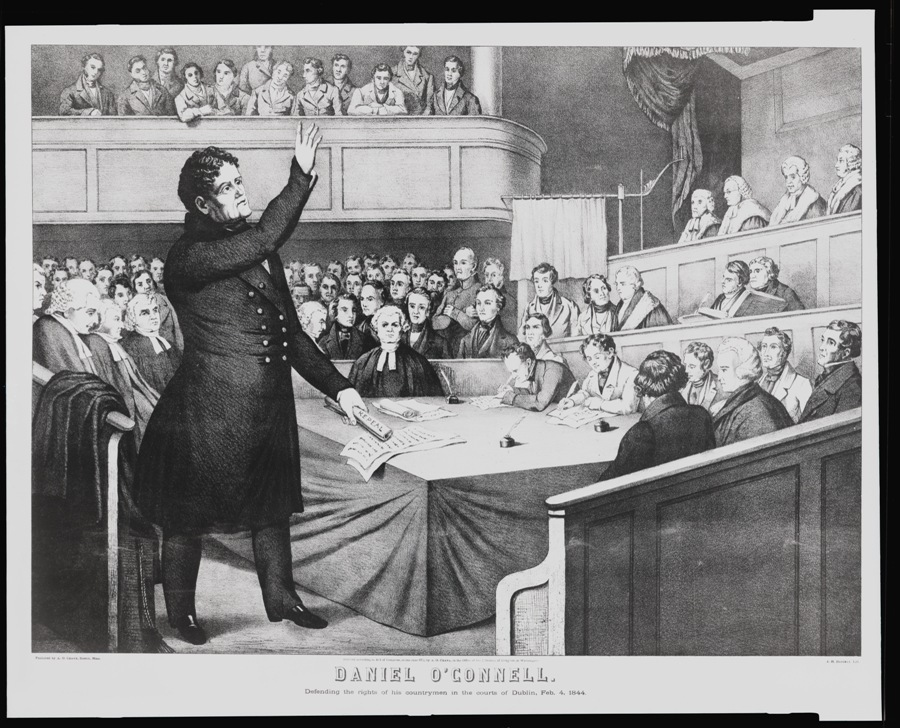 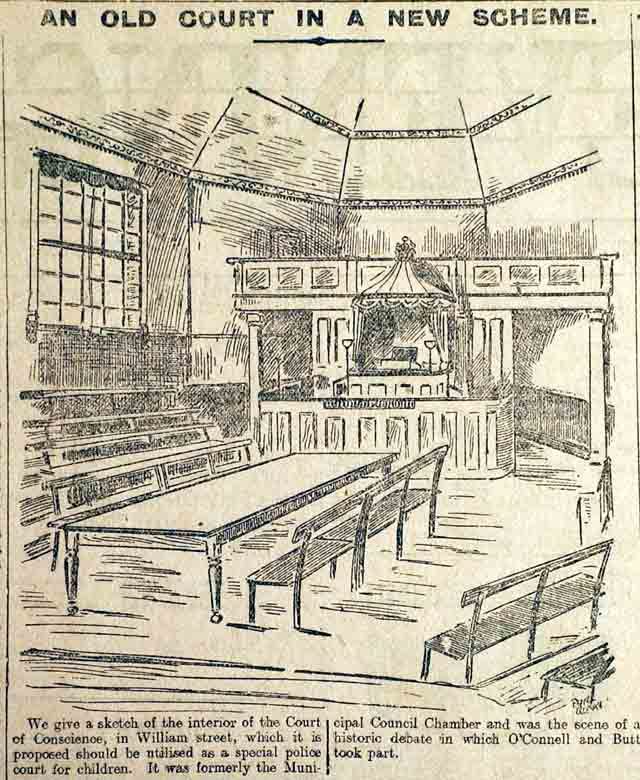 At the time of its construction the City Assembly House on Dublin’s South William Street constituted a tremendously advanced initiative as it stood as the first purpose built public art gallery in either Britain and Ireland and possibly in Europe. It was built by the Society of Artists in Ireland between 1766 and 1771 with the expressed aim of promoting the work of Irish artists and providing an academy for the arts. Its architect is unknown though the street elevation could be by Oliver Grace who exhibited 'an elevation, proposed as a front to the Exhibition Room' with the Society of Artists in 1768 .

Lying in an area once know as the lands of Tib and Tom, South William Street was developed as part of the eastward expansion of the city in the seventeenth century as it outgrew its medieval walls.  The immediate area was developed from 1671 by William Williams, a brewer, and is first illustrated in Rocques map of Dublin from 1756. Despite some late twentieth century interventions, the Georgian street survives remarkably intact with its two great legacies comprising the City Assembly House and the adjoining Powerscourt Townhouse which are set alongside one of the most complete surviving groupings of eighteenth century merchants' houses in the city .

Construction works were led by two prominent members of the Society of Artists: Simon Vierpyl, a celebrated sculptor who was much patronised by Lord Charlemont, and Richard Cranfield, one of the most distinguished woodcarvers and gilders of the period. Following the success of their first exhibition held in Napper’s Great Room in George’s Lane in 1765, the Society of Artists determined to construct their own purpose built exhibition rooms and art academy.

To raise funds for the building, the Society sought subscriptions of three guineas for which a silver ticket was presented which allowed the recipient and his heirs free entrance to exhibitions so long as the Society continued in existence. Their first exhibition in this top-lit octagonal gallery was held in March 1766 and surviving catalogues of this and subsequent exhibitions lend a fascinating insight to the calibre of artists drawn to the building which included William Ashford, Thomas Roberts and Jonathon Fisher.

Silver ticket presented in 1765 by the Society of Artists to each of the 100 noblemen and gentlemen who subscribed three guineas to their building fund.

In subsequent years, the Society of Artists sought to raise parliamentary grants to build a new academy facing onto South William Street which, they stated, would be ‘of the greatest Advantage to the Arts and Manufacturers of this Kingdom, particularly to Painting, Sculpture, Architecture, Engraving, Carving, Pattern Drawing, Upholsterers, Coach-Makers, Silver-Smiths, Weavers, Carpet-Makers, Stucco Workers, Embroiderers, Carpenters Smiths etc’ .

By 1771 sufficient funds were raised to complete a three storey over basement red brick building with a rusticated ground floor and with a doorcase, cill-course and eaves-course of Portland Stone. This art academy provided a space where ‘artists might contribute to the improvement of each other, and where younger students could receive the benefit of instruction from their elders’ . It retains much of its original interior joinery including lugged door and windows architraves and a carved timber open well staircase with ornate carved tread ends which appears to have been altered, perhaps in the early nineteenth century. The stairhall has fine rococo plasterwork with scrolled acanthus leaves and baskets and is lit by a balustraded ceiling light that opens on to the top floor.

Detail of rococo plasterwork in stairhall

Whilst occupied by the Society of Artists, the gallery and academy played a pivotal role in showcasing Irish art but in 1780 the last exhibition was held in the building.

In subsequent years the City Assembly House was used for a variety of functions including public auctions and social balls. Trinity College Dublin’s Historical Society, the world’s oldest student society, met here in 1794 and, five years later, the Bar of Ireland met to discuss the country’s proposed Act of Union with Britain and voted overwhelmingly against it – those in favour of the Union were subsequently to be awarded with lucrative Government offices .

In 1791 Dublin Corporation began to hold its meetings in the City Assembly House as the Tholsel on Skinners Row, where it had previously held its meetings, had fallen into a state of disrepair. They were charged an annual rent of 30 guineas by Richard Cranfield who had by this time acquired full ownership of the building .

In 1809 the Corporation acquired the City Assembly House on a 100 year lease and undertook considerable works so that it could serve as unofficial City Hall. The octagonal exhibition room was fitted out as a debating chamber for the Commons and the great Wyatt windows, which today flood the room with light, were inserted. The chamber beneath it was fitted out to serve as a Court of Conscience. On the first floor a suite of rooms were adapted to serve as meeting chambers for the City Aldermen with decorative plasterwork executed by Charles Thorpe, the stuccodore, builder and future Lord Mayor of Dublin.

As a centre of political activity, the City Assembly House played host to a momentous debate in 1843 led by Daniel O’Connell on the repeal of the Act of Union. The debate lasted for three days and, during this, O’Connell spoke for four hours and ‘delivered a speech, which, even among his, had no superior’ . O’Connell is said to have ‘painted a glowing picture of the wealth, peace, and dignity which would accrue to Ireland from the presence of a Parliament in College Green’ . Isaac Butt, then an opponent of the repeal movement, spoke robustly in favour of the Union though O’Connell’s motion was passed by 41 votes to 15.

Daniel O'Connell Defending the rights of his countrymen (Library of Congress, Washington)

In 1852, the Corporation moved to the former Royal Exchange building on Dame Street at which time the Court of Conscience was moved upstairs into the octagonal room and remained there until it was abolished in 1924. The space it vacated below was for a while used as an engine house for one of the city’s fire engines along with stabling for horses until this was moved to Chatham Row in 1885.

In the early 1920s the octagonal room housed the outlawed Supreme Court of the Irish Republic and up until 1945 it retained its dais for the Mayoral Bench, a partitioned-off area for parties to actions, and a gallery . These fittings and fixtures were removed by the Corporation in 1945 much to the chagrin on the Old Dublin Society which had been holding their meetings in the room since 1934. At the time the Corporation maintained that their removal was necessary to provide more suitable arrangement for processing payments for ‘Blind Persons’ who were paid in the Assembly Room at that time .

A sketch of the interior of the Court of Conscience as featured in the Evening Telegraph, April 1904 (image courtesy Dublin City Public Libraries)

In 1952 the Old Dublin Society collaborated with Dublin Corporation in establishing a Civic Museum in the building using as the core of its collection items donated or loaned by its members. This was opened to the public on Easter Monday 1953 by President Séan T. O'Ceallaigh and remained in use as a museum until 2003 when it was closed for essential remedial works. Today its collections are held in storage by Dublin City Council and will be catalogued to allow proper access for research purposes.

Since the time it was conceived and built by the Society of Artists, the City Assembly House has played a central role in the public life of Dublin city whether in promoting the arts, serving as the assembly rooms for Dublin Corporation or being the home of the Old Dublin Society and the Dublin Civic Museum. The new lease of life that will be brought to the building by the Irish Georgian Society will ensure that it will continue to play this role into the future.