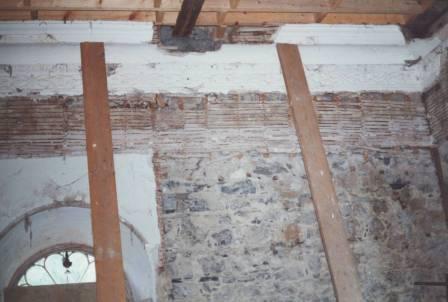 Cloughjordan is a two-storey, five-bay house built circa 1675 adjoining a tower house erected in the sixteenth century. Several additions and alterations were made in the nineteenth century, with a number of restoration works beginning in 1999. In 2004, the Irish Georgian Society awarded Cloughjordan House a grant of IRP £7,250 to assist with the restoration of the intricate ballroom ceiling and wall plasterwork.

The Society’s grant funded the installation of new plaster lath to the ballroom ceiling, the taking of moulds of existing plasterwork, frieze, and cornice with a view to reinstating this where possible and replacing other areas with replicas, and the painting of these areas.

This building conveys important information about the development of rural Irish architecture and contains fine joinery and plasterwork. The building has now been returned to health due in part to the donations of the Irish Georgian Society.

Cloughjordan House is a farmhouse comprised of a five-bay, two-storey central block which is flanked by a modified medieval tower house to the east and a ballroom block to the west. The house has a pitched slate roof. Timber sash windows are of six-over-six configuration except for a few two-over-two and one-over-one windows to the central block and tower house. The central doorway is round-headed and possesses a petal fanlight. An unusual barley-twist staircase also survives.