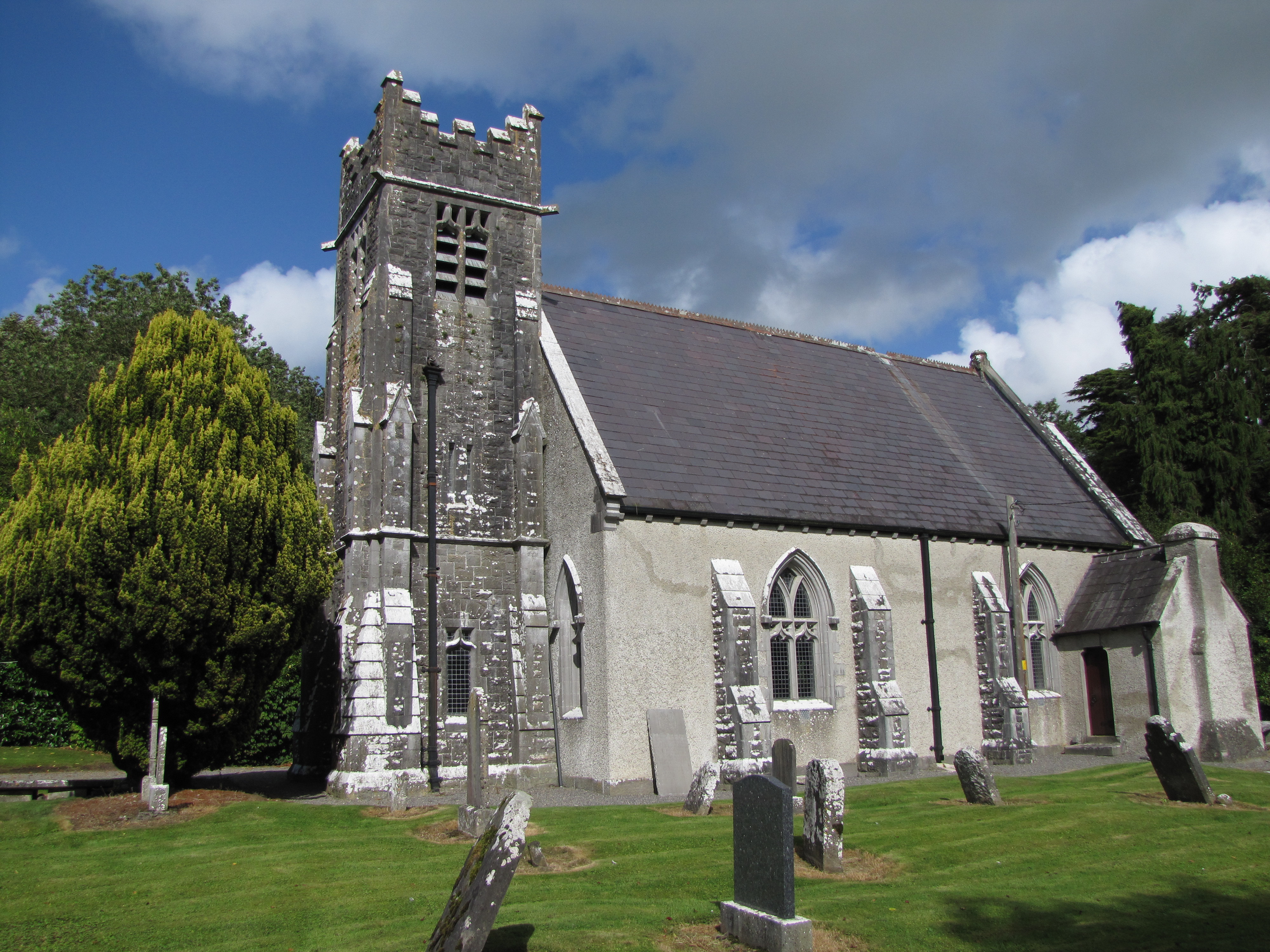 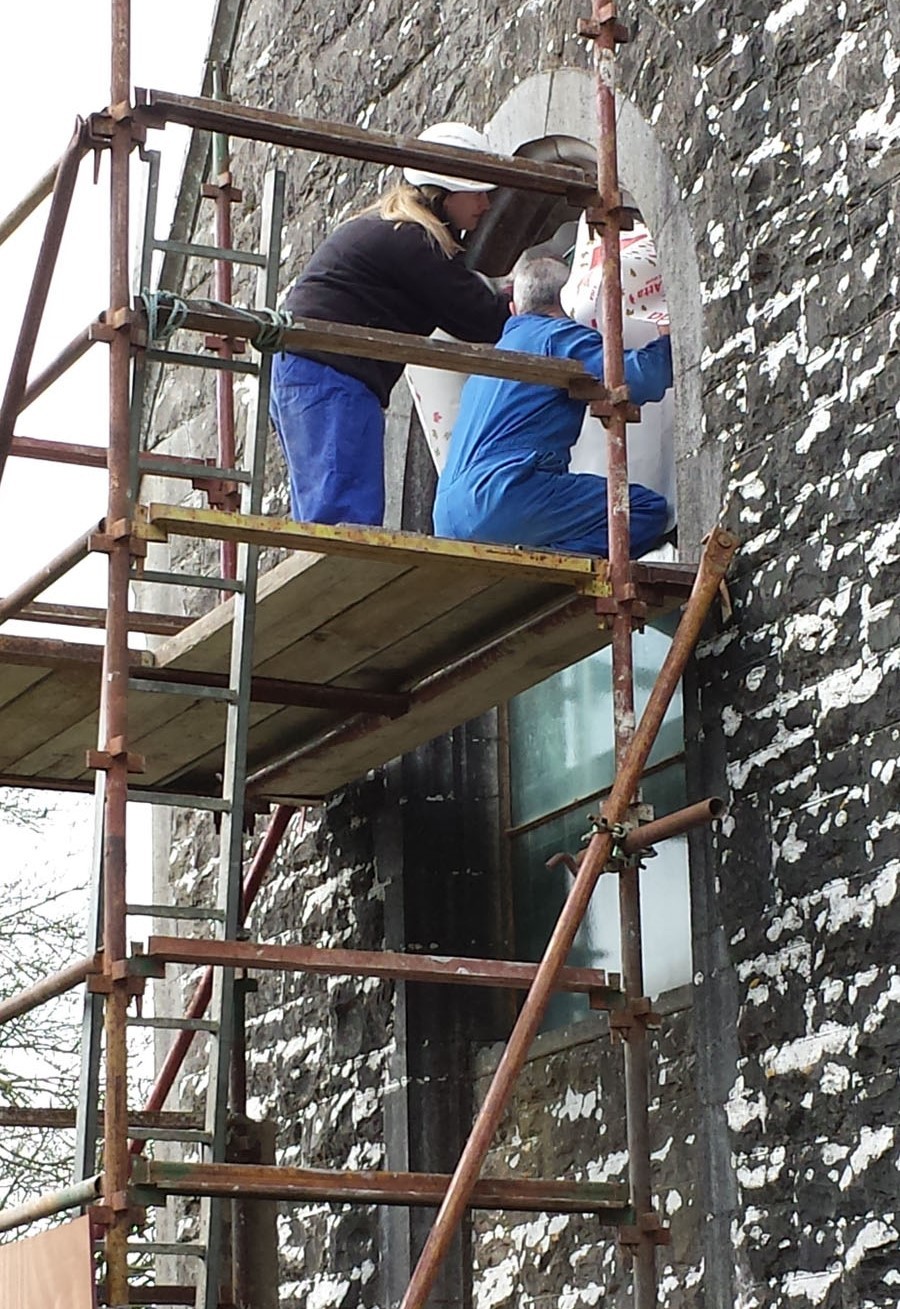 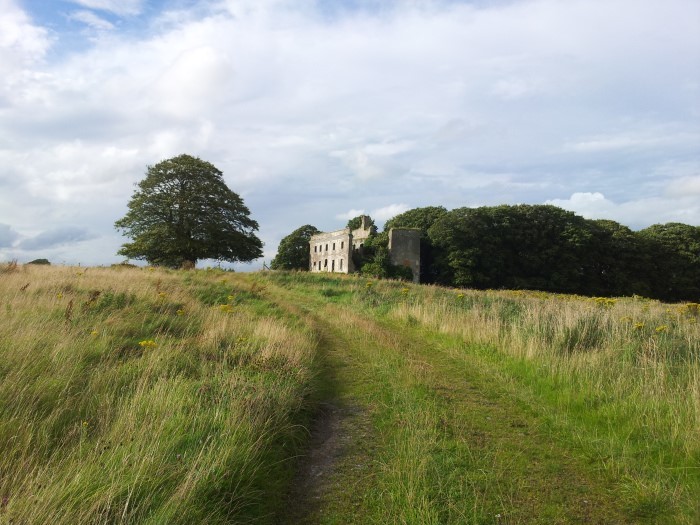 The Irish Georgian Society is coordinating the restoration of an important painted glass window by the artist Thomas Jervais (d. 1799) at Agher Church, Rathmoylan, Co. Meath. The project is being funded through supporters and Chapters of the IGS in London, Chicago and Ireland, through grants from the Heritage Council and from the Department of Arts Heritage & the Gaeltacht’s Built Heritage Investment Scheme 2016, and through the Select Vestry of Rathmoylan Union of Parishes.

SIGNIFICANCE
The painted enamel window by Thomas Jervais’ (d. 1799) in Agher Church was executed in 1770 and presents Paul preaching at Athens, from the cartoons of Raphael. It was formerly housed in the private chapel of nearby Dangan Castle, childhood home of the Duke of Wellington. Following a fire in 1809 which devastated the house, the window was relocated to the East window of Agher parish church, which the NIAH notes was reconstructed c. 1902 and describes as being of ‘a simple and modest form… [that] is enlivened by the treatment of the ashlar masonry’.

Strickland notes the following on Jervais: ‘For the Duke of Leinster he executed some stained glass, which was formerly in the bow-window in the large room in Leinster House; and did several windows for Lord Charlemont at Marino, which were destroyed by fire in March, 1807. Three windows by him were formerly in Rathfarnham Castle, as recorded by Austin Cooper in 1781; but they have now disappeared.’

The Oxford Dictionary of National Biography notes the following in its entry on Jervais:

‘[Jervais] established a reputation for small-scale, finely detailed panels – generally copies of Italian, Dutch and Flemish masters – for the expanding domestic market… He held a number of popular exhibitions of his work in London in the 1770s and 1780s. In 1777 Jervais won the commission for which he is best remembered: the great west window of the ante-chapel of New College, Oxford, to designs provided by Sir Joshua Reynolds: a large Correggio-inspired Nativity over standing figures of the cardinal virtues and Christian graces. This work, completed in 1787, though now much deteriorated, remains a high point of naturalistic enamel glass painting of the late 18th century.’

URGENCY
The window at Agher is set in cementitious mortar which is cracking and missing in places.  It is supported by copper wires soldered to leaded panels and twisted around rusting internal saddlebars. It is divided into three leaded panels, stabilised with putty, mortared into the perimeter groove. Deteriorating leadwork and putty contribute to significant buckling of the window, now heavily reliant on the saddlebar supports.

EFFICACY
Survival of the window is threatened by a significant delay of works which were identified as being urgent in 1992 (Lawrence 1992). The window is at risk of collapse, or partial loss and biogenic growth. Conservation works would secure its future as an artefact, a potential tourist attraction in the Boyne Valley catchment area, and as memorial to the Duke of Wellington.

SKILLS DEVELOPMENT
The conservation works are to be undertaken by the York Glaziers Trust. intrinsic to their programme of works is the engagement of an Irish conservator who will gain experience with the aim of returning to Ireland and enhancing the skills base in this country.

The history of Agher Church and House

Agher church stands just outside the garden of Agher House and so formed part of the estate. Jonathan Swift was rector at Agher from 1699 until his death in 1745.  In 1804, a new church was erected to seat one hundred. The cost was mainly borne by the local land-owner, Samuel Winter, who made a gift of £450 and later, to make up the short-fall, a loan of £168. The church is renowned for its east window. Made in Dublin by Thomas Jervais, it is the second earliest known piece of Irish-made stained glass. The unusual subject is St Paul preaching to the Athenians on top of Mars Hill outside the Court of Areopagus. The design was inspired by a cartoon of Raphael and was created by painting on glass rather than using stained glass. The window was originally erected in the private chapel of Dangan Castle, the seat of the Wellesley family, which burnt down in the 1809. The window was presented to Agher by the O’Connor family, who were then occupying Dangan. Soon after the new Agher church was constructed Samuel Winter erected a family burial vault in the churchyard. Agher church was re-built in 1902.

Agher House stood south of Summerhill village until 1945 when its ruins were removed. The yard with its rows of old style out offices has survived. There was an underground passage leading from the basement of the house to the yard so the servants could not be seen by the occupants of the house. Close to the house was an ornamental pond. There were two avenues into the house; the one which went by the church was the back avenue which led to the farmyard.

In 1652 Samuel Winter, who had received an MA at Cambridge, was made Provost of Trinity College and managed to acquire land in Offaly and at Tullyard, Trim.  Following the restoration of Charles II Winter was removed from his position at Trinity College. From his first marriage he had five sons. Samuel, his eldest succeeded him. Two sons, Ebenezer and Gonaught, inherited only 100 acres between them, and that only on condition that “they should reform their wicked lives.” The Winters inter-married with local and newly arrived families particularly the Bomfords.

Francis Winter was born about 1690 and as a younger son had to find his own living as a woollen draper in Dublin. When his older brother, Samuel, died he inherited all the Winter estates. Francis married Margaret, eldest daughter of Bernjamin Pratt of Agher. Another branch of the family established themselves at Cabra Castle, Kingscourt. Benjamin Pratt became the first of the Pratts to settle at Agher. The original property of 1150 acres included the townlands of Agherpallice, Ballintogher, and the detached townland of Genetts (Ginnetts) near Galtrim to the north. Benjamin Pratt died in 1706 aged 67 and was succeeded by his second son, Benjamin. This Benjamin married twice, firstly to Jane Nugent and secondly to Elizabeth Moore. His daughter and heiress Margaret married Samuel Winter. Their son, Samuel Winter, was born in 1741 and brought up with his two sisters by their uncle, John Pratt. In 1771 when Benjamin Pratt died Samuel Winter inherited the Pratt estates including Agher, Killeter, Co. Cavan and Killynon, Westmeath. This united the Winter and Pratt estates.

Samuel then rebuilt Agher House and moved to Agher in 1776. The cost of building was such that parts of the estate were sold to generate the necessary revenue. In 1778 and again in 1784 he was High Sheriff of Meath. In 1784 his under sheriff disappeared with public funds and Samuel had to make good the loss. He died aged 70 on 19th May 1811 and was the first occupier of the Winter vault, which he had constructed. His eldest son, John Pratt Winter, was born in 1768 and educated at Rev Oliver Miller’s school at St Mary Abbey, Trim. He became a barrister and magistrate. Marrying Anne Gore, the couple made their home at Eccles Street, Dublin. The couple then moved to Agher until their home at Tullyard was completed.

In 1798 John Pratt Winter resigned his position as captain in the Lawyer’s Corps of the Yeomanry as he could not accept the government’s actions of ill treating the ordinary people and burning the houses of the peasantry.

In 1803 John was appointed a Resident Magistrate for Meath and Kildare; in 1804 he was made Deputy Governor of Meath and in 1805 High Sheriff. His father died in 1811 and John inherited Agher and the other Winter estates, all of which were heavily charged to provide portions for the younger children under the terms of his parent’s marriage settlement. He stayed on at Tullyard until his mother died in 1814 when the whole family moved to Agher.

In 1817 his financial position was so serious that he was forced to lease Agher and take his wife and the younger members of the family, including young George and Samuel Bomford to live in a boarding house in Paris.

They remained there for seven years, returning in l824. John Pratt Winter was known to the Bomford family as “The Ruffian.” John Pratt Winter died in 1846. John’s sister, Anna Maria Winter, never married but did published three books; “Some Thoughts on the Moral Order of Nature,” “The Fairies and other Poems” and a poem “The Ideal Confidant.”

Samuel Winter, the eldest son of John Pratt Winter, was a justice of the peace and Deputy Lieutenant of Meath. In 1837 he was elected High Sheriff of Meath and in 1851 of Cavan. Samuel died in 1867 and was buried with his wife, Lucy, in the Winter vault at Agher Church.

James Sanderson Winter was born in 1832 and succeeded to the estate. James erected a number of new estate buildings including a school and stewards house. James Sanderson Winter died unmarried on 10th July 1911 and was the last Winter to be buried in the family vault at Agher. His estates were passed to his nephew, Lieut-Colonel Edward Winter Purdon, the eldest son of his sister Elizabeth Anne, with the proviso that he took the surname of Winter, which he did in 1912.

When Edward Winter Purdon died in 1927 Agher passed to his eldest son, Captain Charles Edward Purdon-Winter. In 1936 Agher was sold to the Land Commission, which split the estate into separate lots. The house fell into ruins and was removed.

Project champion and co-ordinator is Deirdre McDermott (conservation architect, planner, urbanist and IGS volunteer) to whom the Society is most grateful.