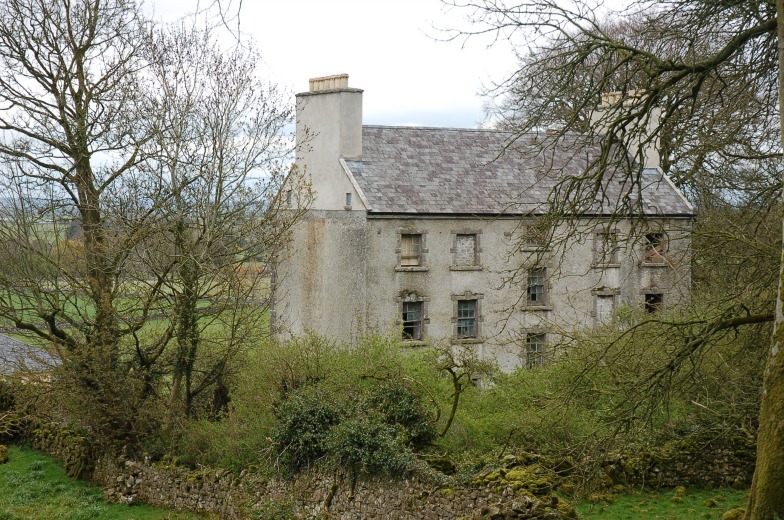 Scregg House was built in the mid-eighteenth century by one Edmund Kelly (d. 1802) and sold by his son John Edmund Crofton Kelly through the Encumbered Estates Court in (1856). It was later occupied and acquired by another branch of the Kelly family from Ballinasloe who resided in the house until circa 1980 when a new home was constructed nearby. Scregg is of exceptional interest for the quality of craftsmanship applied in its construction and the relative sophistication of its design. Further, it remains largely unchanged since the time of its construction. Though it has lain empty for forty years, it retains most of its original fabric with interesting plasterwork and important early paint schemes. Of additional interest at Scregg is evidence of multiple periods of occupation that are demonstrated through the remains of a castellated site to the rear of the house, pagan Sheela-na-gigs embedded in walls and indications of a relict medieval field system.

The current owners of the house, Peter and Lilly Kelly, undertook a programme of consolidation works some years ago with the goal of weatherproofing the house and halting processes of decay. To support these works, the Irish Georgian Society awarded a grant of €12,000 in 2007 toward the repair of the roof and rainwater goods, and in 2009 a grant of €4,000 towards window repairs.

Scregg House is an important five-bay, three-storey over basement country house. The pitched roof is covered in slate while roughcast rendered walls and tooled limestone window surrounds complete the structure's exterior. A pedimented entryway with engaged Ionic columns and sidelights front the building.