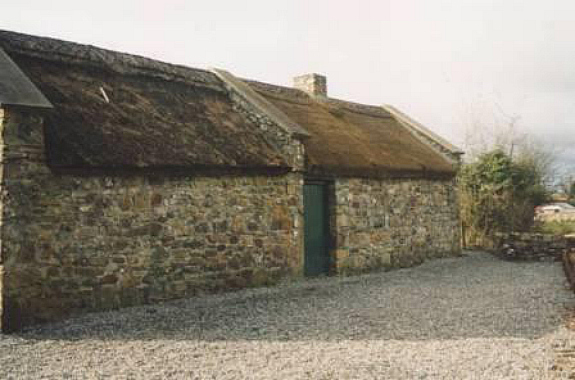 Sooey Forge and Dwelling, a small thatched structure, was built circa 1880. Originally used as a forge or blacksmith’s workshop, it later served as a spirit grocer’s. In fact, before it was restored a small painted sign that read, “P. Breheny, Lic’d to Sell Tobacco” hung over the door.

The forge was subsequently used as a dwelling and finally for simple storage before it became overgrown and dilapidated. Despite this neglect the structure still retained some of its original form and character. Previous to 2002 a large amount of work was undertaken by the FAS Community Employment Scheme, including re-roofing the structure and rebuilding those parts which had collapsed. In 2004 the Irish Georgian Society was asked for conservation project funding and a grant of €500 was awarded.

This grant supported the re-thatching of the forge’s roof. The ridge was completed in its original, diamond-patterned form and with rye straw. A cleared gravel garden now exists and the structure has been returned to health. The Society’s grant covered over seventeen percent of the project costs and secured the intrinsic character of this vernacular building.

The Forge is a five-bay, single storey vernacular structure. It boasts a thatched roof with diamond pattern scallops to the ridge and possesses rubble stone walls. It retains its original two-over-two sash windows and three vertically-sheeted timber doors to the front elevation. Only one door exists to the rear elevation.