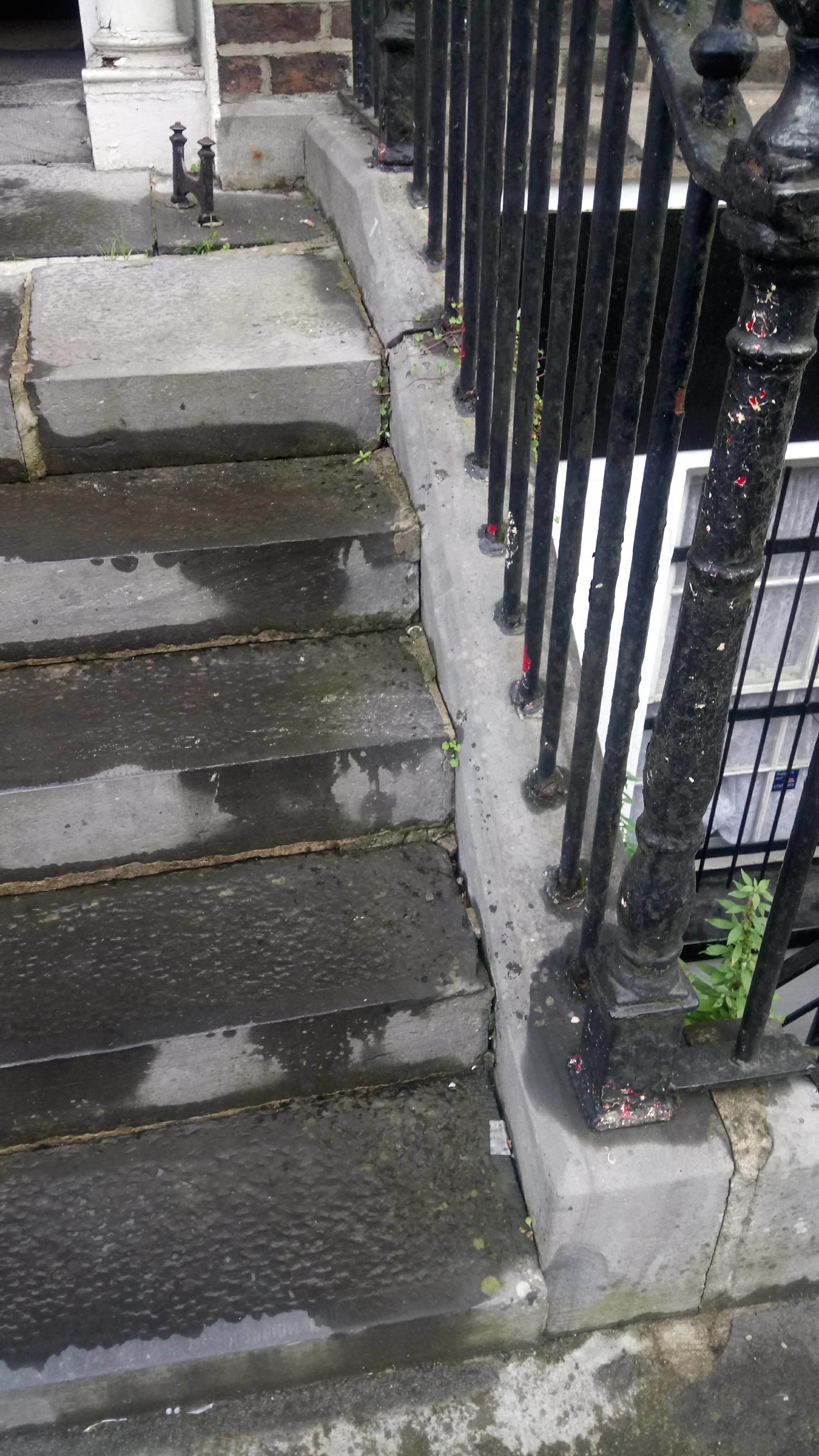 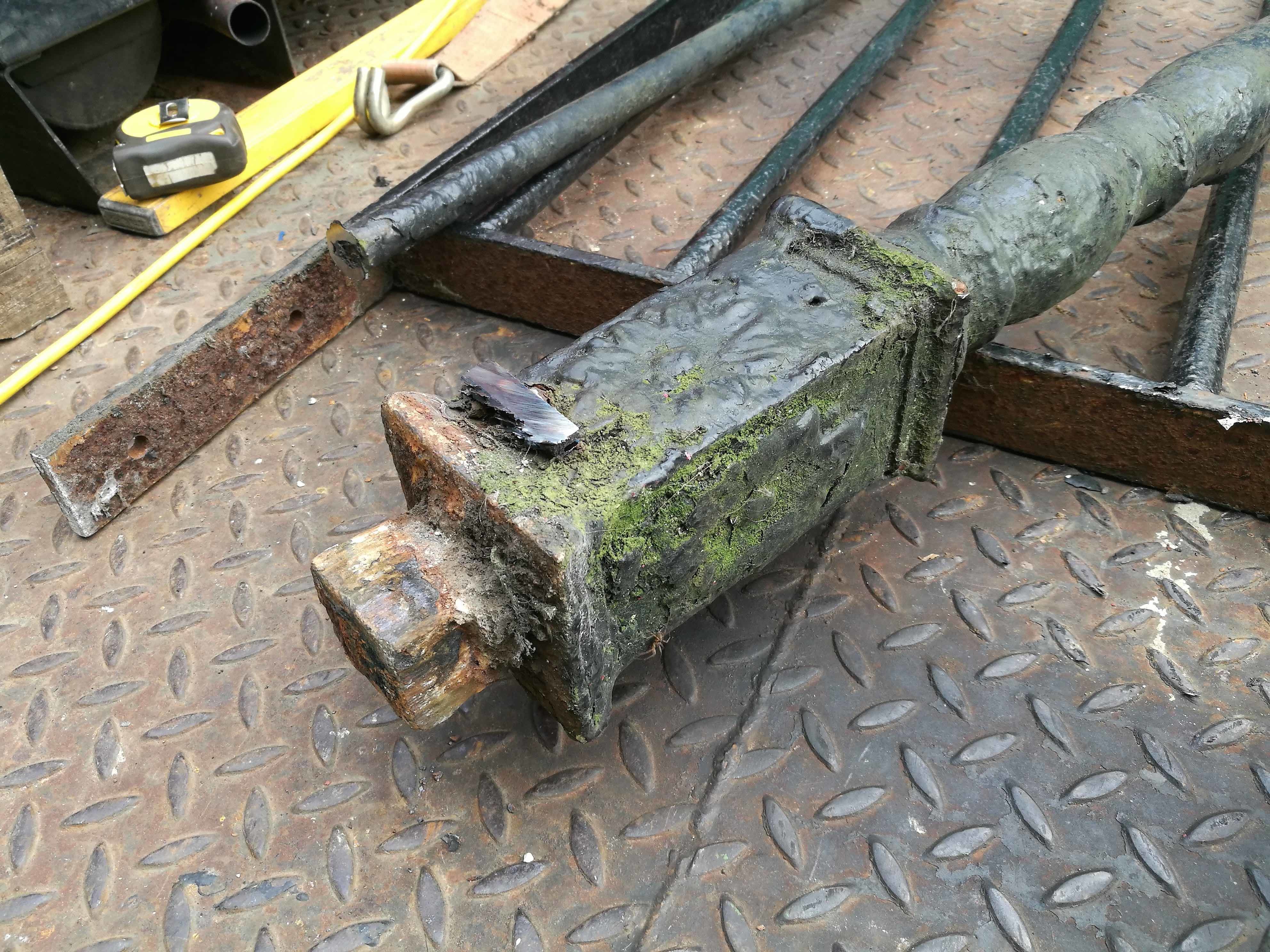 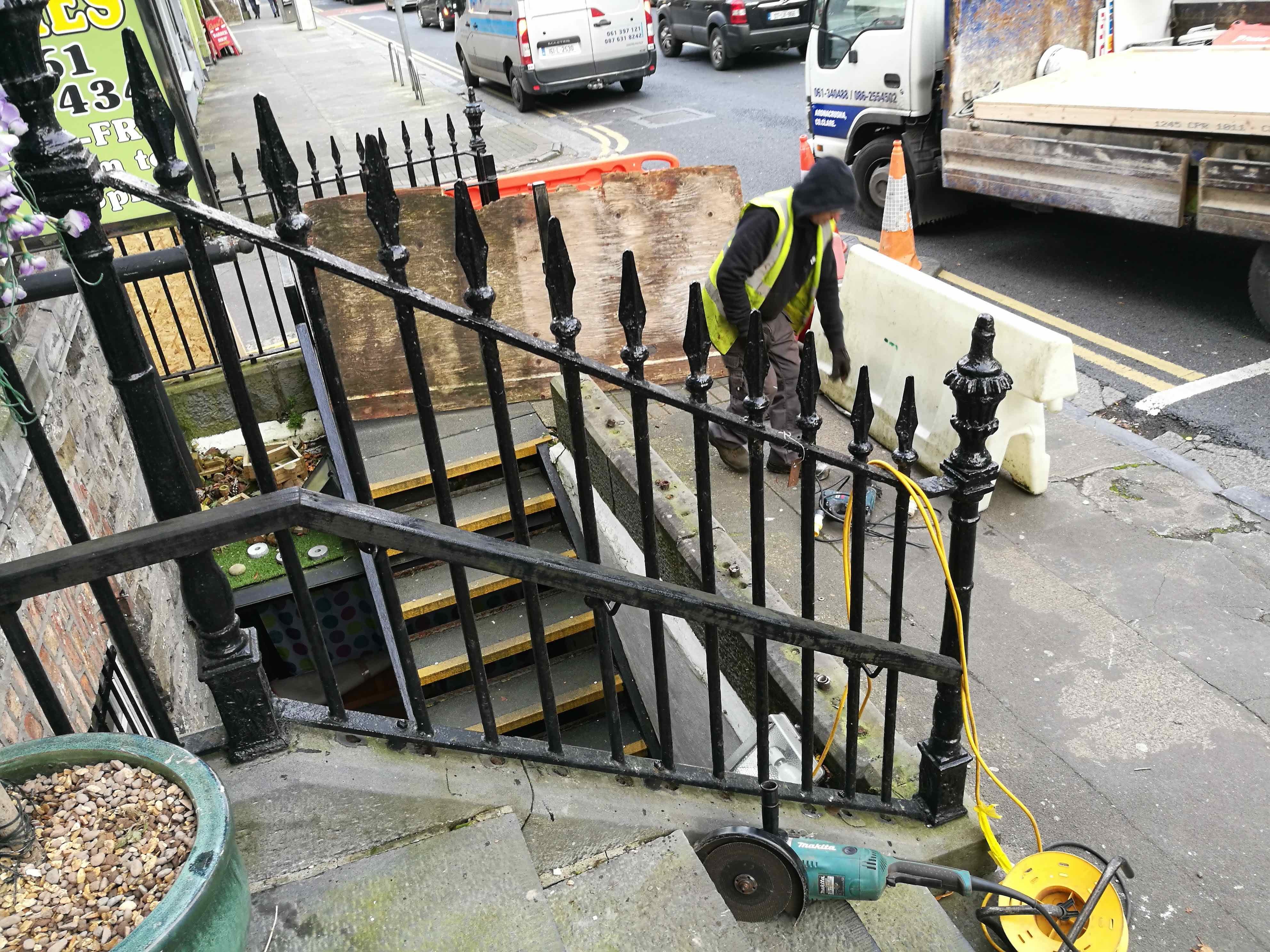 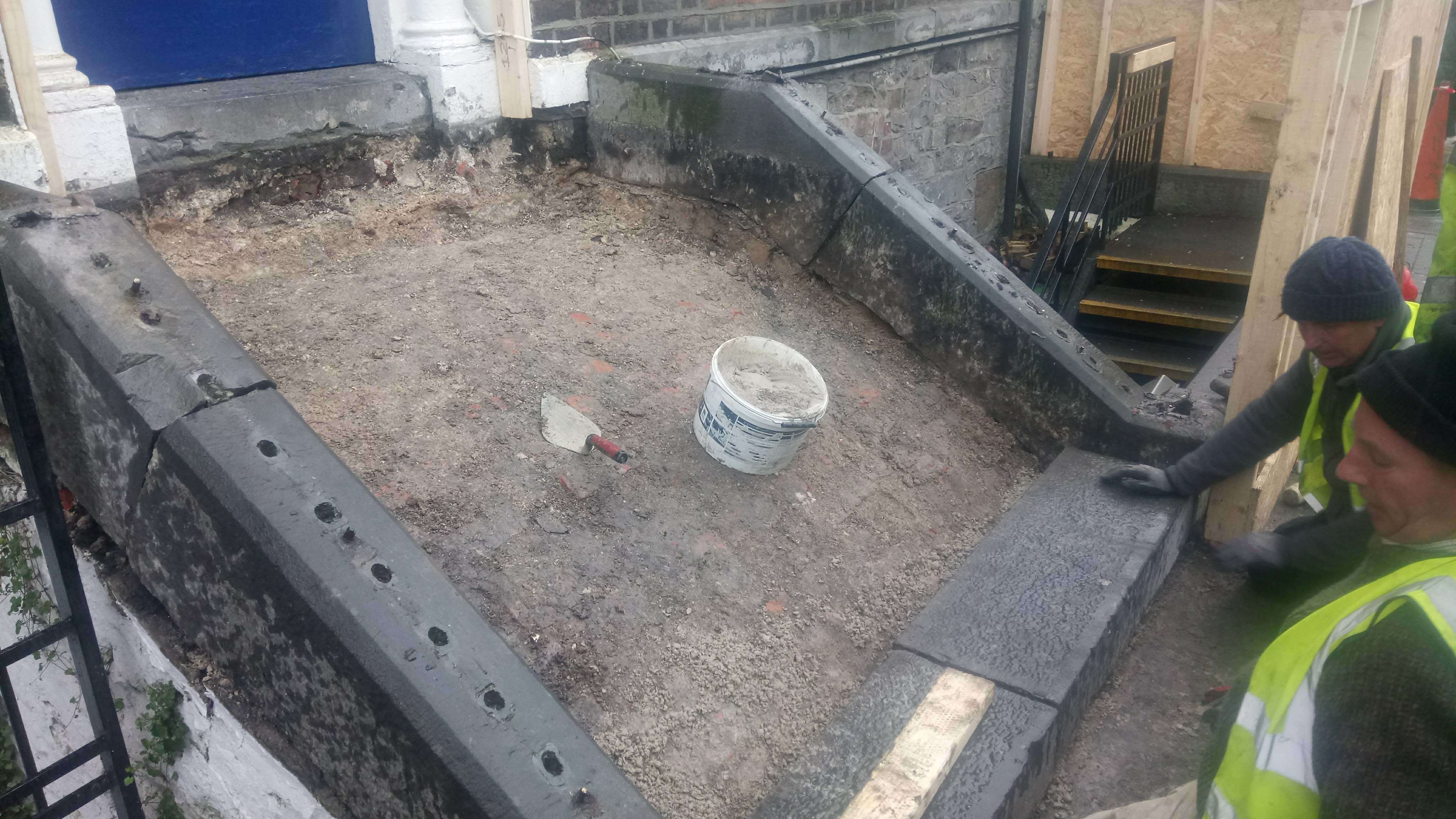 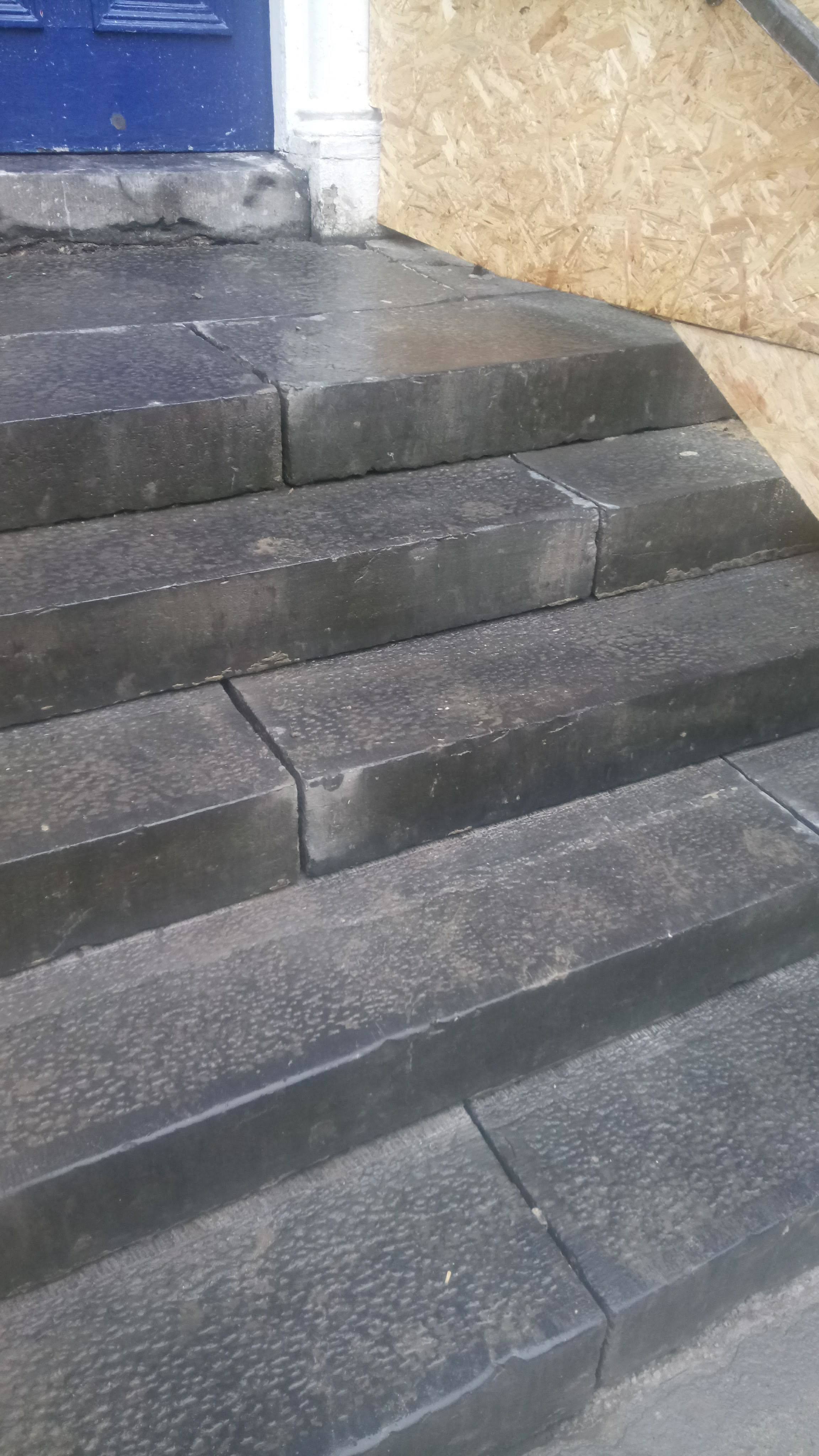 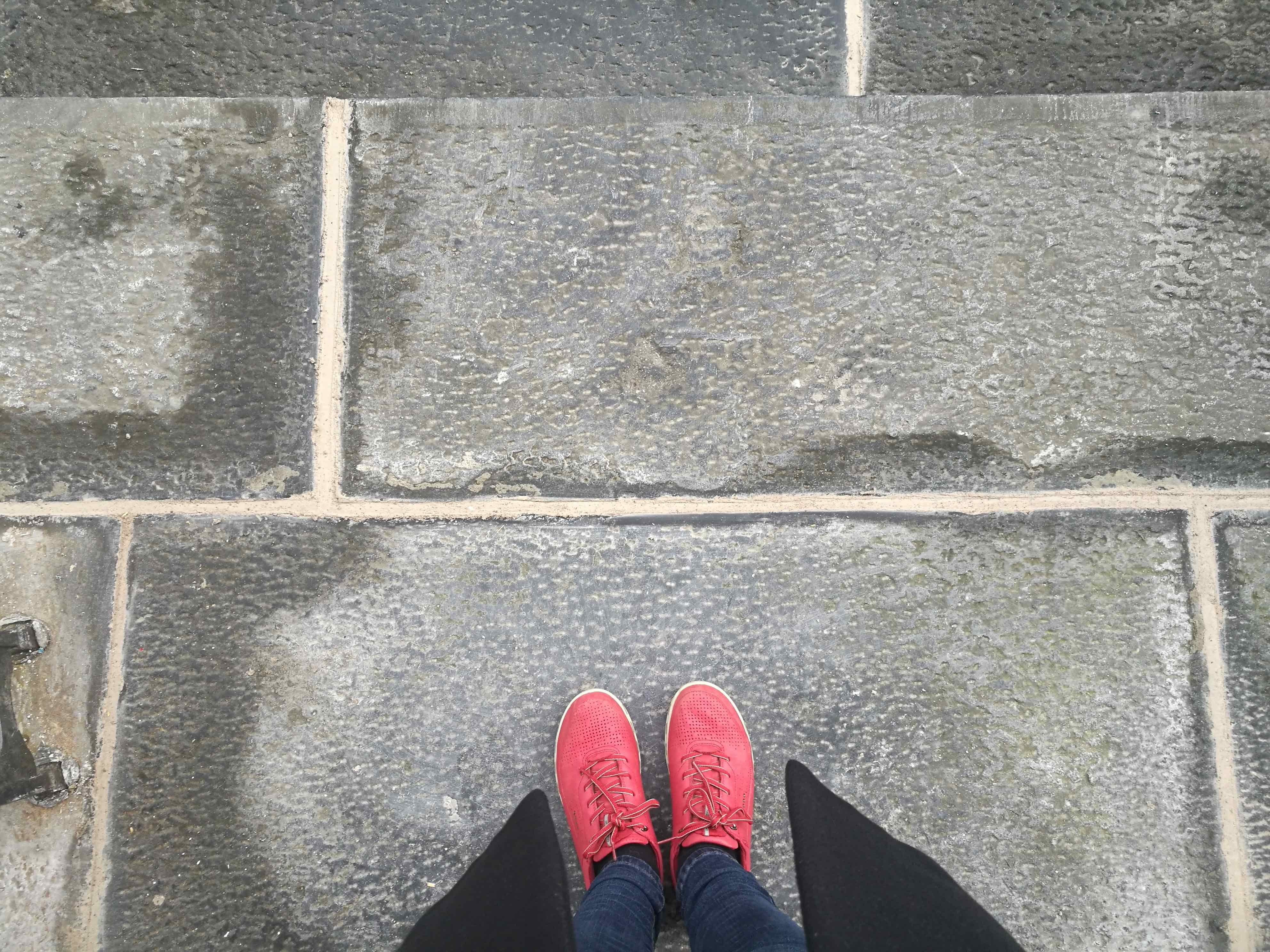 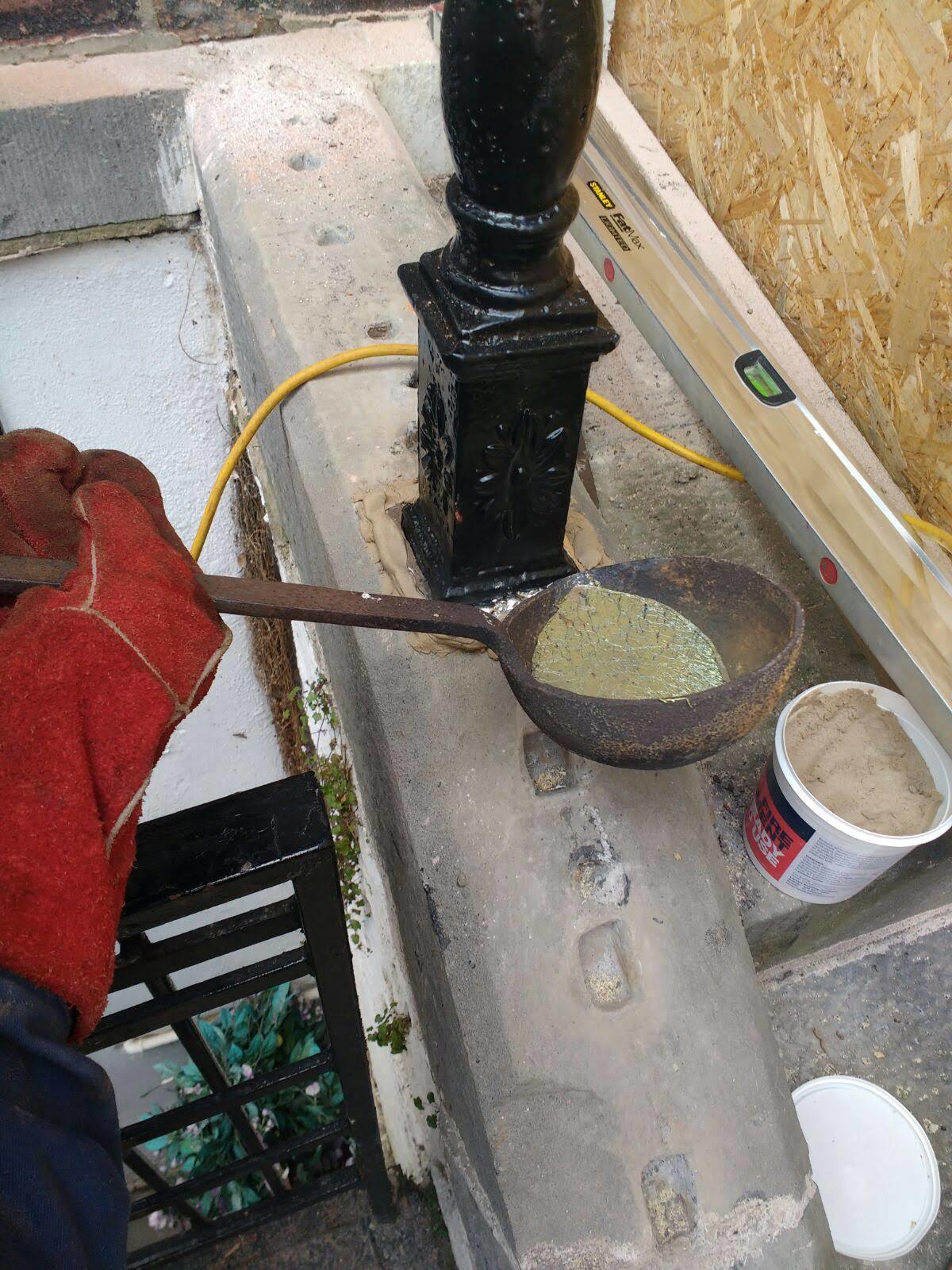 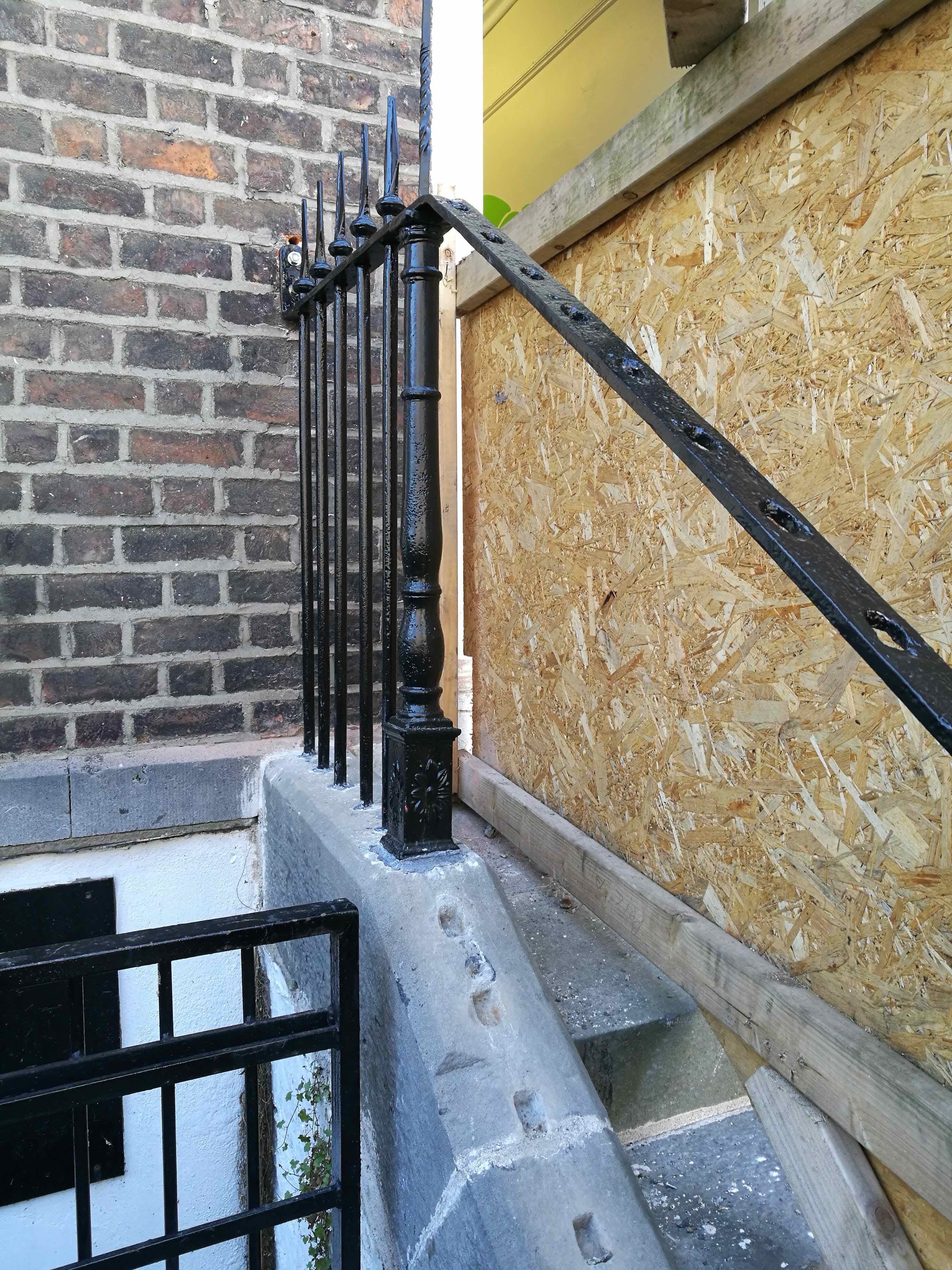 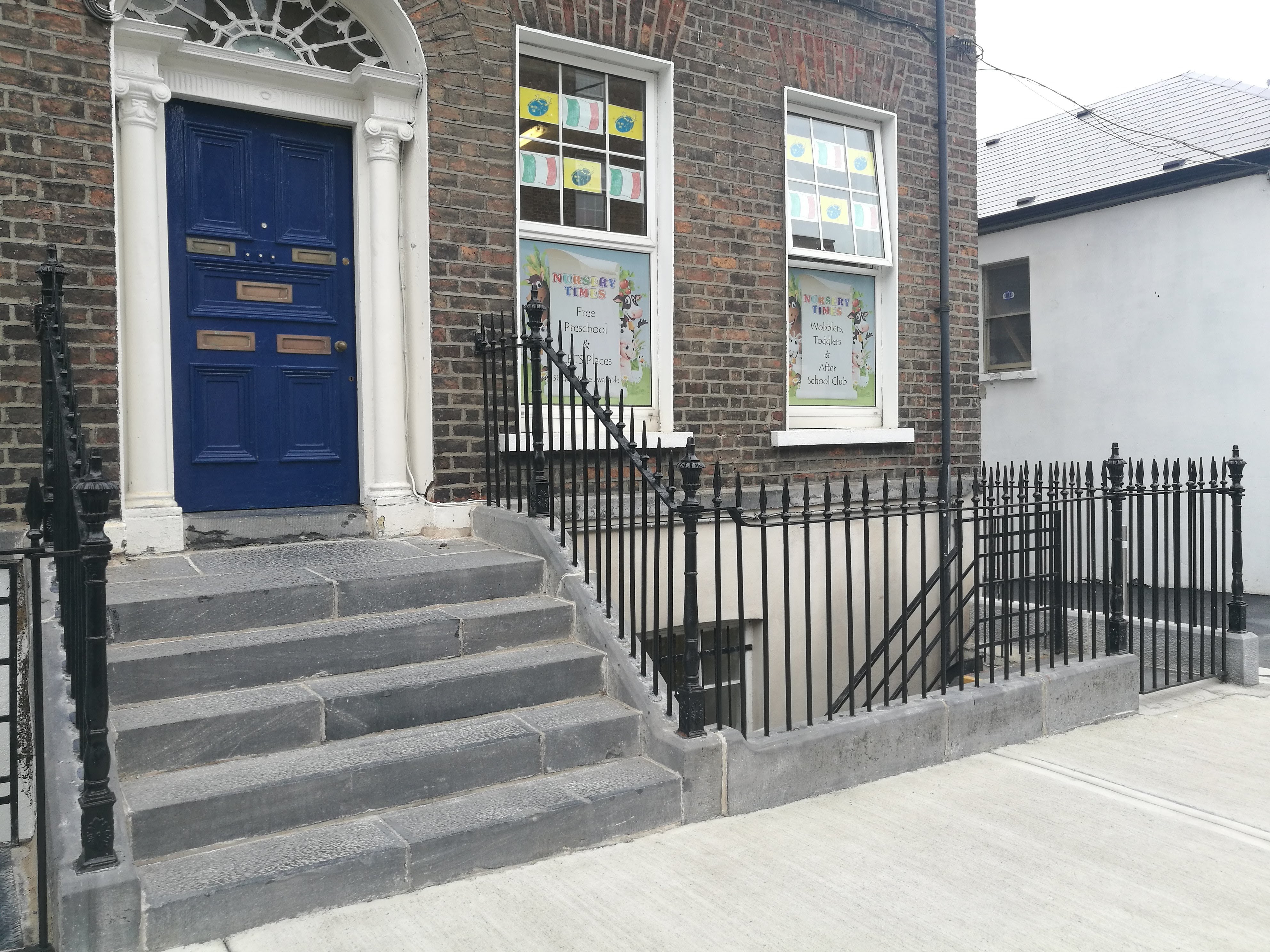 Newtown Pery in Limerick contains a wealth of historic metalwork, both wrought and cast iron, which combined with limestone kerbs and steps give the area much of its unique character. In recent years the majority of the railings have fallen into a sad state of repair. This neglect has been acerbated by the poor quality of repair and often complete removal, which has taken place.

The majority of railing repairs have involved the removal of part of the wrought iron balusters where they are set into the kerbs. This is generally done in two ways. Firstly, that the balusters are shortened and a continuous mild steel flat is introduced at low level or alternatively concrete is cast around the balusters at low level. Both repairs are damaging to the railings and ruin the aesthetic of the historic townhouse entrances.

Much more damaging however the wholesale replacement of historic railings with poor quality mild steel is. This has become increasingly prevalent. One other feature, which has altered the appearance of historic railings, is the insertion of gates and stairs to basement level. There would have been no gates in townhouse railings originally. The structure of the railings, which should span from wall back to wall in a C shape, is significantly weakened by the introduction of gates.

One of the main goals of this project was as a demonstration to show how damaged railings could be restored. It was our intention to find a project that included all of these problems and to establish a sensitive way of repairing the railings. Following a fundraising drive, which was supported by the Irish Georgian Foundation, Limerick City and Council and the Department of Culture, Heritage and the Gaeltacht, expressions of Interest were sought from owners of townhouses in Newtown Pery. Two townhouses were selected on Mallow Street, based on the criteria that they had much of their historic railing intact but that they suffered from many of the common issues discussed. Both houses have basement access and both sets of railings had been extensively modified with mild steel.

It was also decided to include a gated set of railings so that we could find a way of introducing the gate in a more sympathetic way and one that left the railings structurally sound. It was considered important to retain the gates as most of the townhouses now have them (No. 28’s are used by a busy crèche) and this use of the basements from street level is valid and should be accommodated.

The project was tendered to 5no. specialist blacksmiths and a main contractor was appointed to provide supervision on site, health and safety and PSCS. The successful blacksmith was Brendan St. John from Thurles. Brendan dismantled the railings and ordered replacement wrought iron from England so that forge welding of the repair works could be started.

Entrance steps and kerbs showed signs of significant movement and mortar joints had opened (and had been patch repaired with sand cement). A stone mason re-set the entrance steps and kerbs. It was discovered that the original limestone steps had been set in what the mason called ‘loam’, basically a clay. This had caused fairly substantial slipping of the treads. The steps were re-set in a quick setting hydraulic lime lean mix and pointed with a standard NHL 3 lime mortar.

There was some difficulty in re-instating the railings. The top rail, the flat bar through which the balusters pass, had been repaired and welded in the past. The set out of the holes in it, bore little relation to the original receiver holes in the kerbs. The balusters were reset in the original holes using hot lead. New holes were doweled where the existing ones could not be matched. A powdered stone and resin mix was colour matched to the existing kerbs and used to fill any holes. All the metalwork was stripped of paint using a mixture of mechanical and dry abrasive cleaning before priming and repainting.

Stone kerbs were cleaned lightly with high pressure low volume power washing. A section of the kerb at the gable end of No.28 had become severely damaged. This may have been due to an impact but there was also some frost damage. This section of stonework was replaced. New limestone kerbs were introduced with tool finishes and chamfers to match existing.

We requested that the client remove the existing projecting signage and flower pots. The basement wall of No. 28 had been an exposed wall of random rubble limestone with a strap pointing. This was rendered in lime mortar. It is hoped that this particular client will keep the good work going and replace his pvc windows in due course.