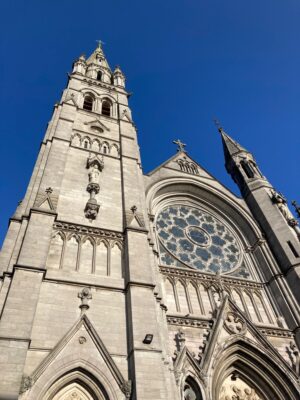 This talk will explore some of outline some key questions and topics central to a reconsideration of Roman Catholic architecture in Ireland between 1828 and 1936. Taking the Cathedral of the Assumption in Carlow as its starting point, and ending with the Church of Ss Peter and Paul in Athlone, the talk will examine the political discourse that surrounded religious buildings; the role of architecture in expressing and consolidating Roman Catholic Irish identity; the significance of the early Christian and medieval past for these new building projects; and the importance of transnational Catholic heritage to Irish church-building throughout this period.

Niamh NicGhabhann is an art and architectural historian, and senior lecturer in the Department of History, University of Limerick. She has a B.A. and PhD from Trinity College Dublin, and her research has focused on the political, social, and religious significance of medieval ruins during the nineteenth and twentieth centuries. Her book, Medieval ecclesiastical buildings in Ireland, 1789-1915: Building on the Past was published by Four Courts Press in 2015, and her current book project focuses on Roman Catholic architecture in Ireland between 1828 and 1939. She convenes the Material and Cultural Heritages of Religion in Ireland research network