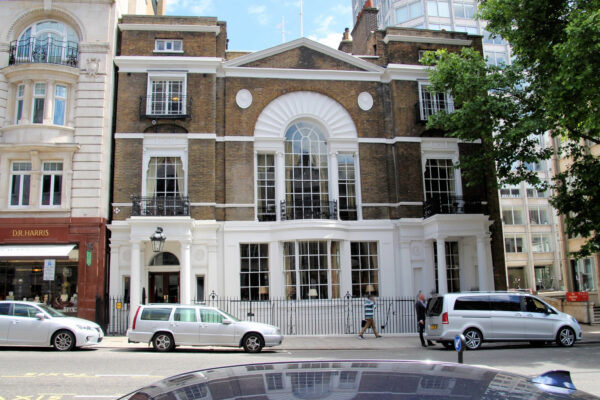 The pre-Christmas Club dinner has become a firm fixture in the London Chapter's annual calendar and this year's will be our seventeeth. For those who are new to all this, previous dinners have been held at Clubs such as the Reform, Travellers, Cavalry & Guards, Garrick, Brooks's, Oriental and Carlton - each one has been a sell-out. This year we will be dining at Boodle’s in St James’s Street.

The present building was originally designed by John Crunden for another club in 1775-6, but taken over by Boodle’s when they moved from Pall Mall in 1783. Later alterations were carried out in the 1820’s by J B Papworth. It is more modest in scale but more elegant than the later Pall Mall clubs: The Saloon is a particularly handsome neo-classical room with a Venetian window. It was renovated to its original colour scheme in 1996 by Ian Bristow and has an excellent chimneypiece.

This year's speaker, John Martin Robinson, is a long-standing friend of the IGS and will be well-known to many of us. His talk will be entitled: “Catholic Herald “: Reminiscences of taking part in the ceremonial of the Proclamations and State Funeral”.

When trying to summarize his credentials it is hard to know where to start. His principal role is as one of Britain's leading architectural historians. He started his career in the Historic Buildings Division of the Greater London Council, where he worked inter alia as architectural editor of the Survey of London, and Historic Buildings Inspector for Westminster, and also revised the Statutory Lists of Historic Buildings for two East London boroughs. As an independent consultant since 1988 he has advised on the restoration of numerous country houses, churches and other listed buildings

He has been an Architectural Writer for Country Life for over 40 years contributing nearly 400 articles and reviews. He was chairman of the Art and Architecture Committee of Westminster Cathedral and oversaw the completion of the mosaics in St George's and St Joseph's chapels, the Vaughan Chantrey and several individual panels.

In 1978 he was appointed Librarian to the Duke of Norfolk, Earl Marshal. He was Fitzalan Pursuivant Extraordinary at the College of Arms from 1982 and is now Maltravers Herald Extraordinary.

He is an active member of the Georgian Group of which he was a trustee and vice-chairman for 20 years, acquiring their HQ Adam townhouse in Fitzroy Square, setting up the Casework committee, and instituting the Young Georgians, and founding and presiding over the Annual Conservation Awards for 10 years from 2003 to 2013.

During lockdown he wrote a second volume of memoirs entitled: “Holland Blind Twilight”.

Following the success of previous years there will be an auction to raise much needed funds for the Society. Last year the auction included books, theatre tickets, overnights stays, weekend breaks and a week’s holiday. Any offers of auction prizes will be most welcome.

Guests will be welcome. If you would like to sit near another member then please inform us and we will try to arrange the seating plan accordingly, but cannot guarantee being able to meet everyone's requirements.

Please note that numbers are strictly limited and so if you wish to be certain of a place then you are recommended to apply as soon as possible. In the event of over-subscription, priority will be given to members.

Please complete the attached Application Form and forward it to

Payment will be accepted online or by cheque. As per below.