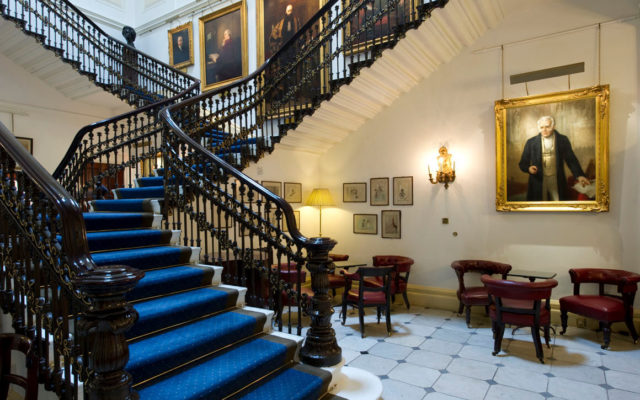 The pre-Christmas Club dinner has become a firm fixture in London's annual calendar and this year's will be our fifteenth. For those who are new to all this, previous dinners have been held at Clubs such as the Reform, Cavalry & Guards, Garrick, Boodles, Brooks's, Oriental and Travellers - each one has been a sell-out. This year we will be dining at the Carlton Club in St James's Street.

This year’s dinner takes us to the heart of the Tory establishment and to one of the greatest club buildings. Founded in 1832 in the aftermath of the victory of the reforming party, the Carlton Club was designed as a party political organisation, just as other clubs after the Napoleonic War were founded to satisfy particular interests. By 1835, its wealth and standing were such that it was able to occupy new premises on Pall Mall designed for the Club by Sir Robert Smirke.

After the Pall Mall building was destroyed in an air-raid during the 2nd World War, 69 St James's Street became the Clubhouse. However, many of the Club's most valuable possessions, including portraits of Conservative Prime Ministers and Cabinets since the 18th century, survived and can still be seen today. The St James’s Street building was commissioned by Arthur's, a gentlemen's club, now dissolved. The club, established in 1811, was notable for being the first members' club wholly owned by the members, as opposed to the proprietary clubs which previously existed (like White's and Boodle's) and it accordingly served as the mould for most of the 19th-century members-owned clubs which followed.

The building (1826-7) was designed by Thomas Hopper (1776–1856) who was much favoured by George IV, and particularly notable for his work on country houses across southern England, with occasional forays further afield, into Wales and Northern Ireland.

This year's speaker is Will Palin, who will no doubt be known to many of you. Since 2014, Will has been Director of Conservation at the Old Royal Naval College, Greenwich. In this role he has presided over the £8.5m restoration of the Painted Hall – a project which was recently awarded a coveted RIBA National Award.

As a former Director of SAVE, Will led campaigns to ensure that historic buildings were not simply preserved, but brought back into life. He took forward the rescue of Castle House in Bridgewater, Somerset and a major group of Regency houses in the former Naval Dockyard at Sheerness, Kent, as well as supervising a series of successful legal challenges to demolitions of historic buildings. After leaving SAVE, he became engaged with the Georgian Group, the Ancient Monuments Society and other conservation organisations.

Following last year’s success, there will be an auction to raise much needed funds for the Society. Last year included books, theatre tickets, overnights stays, weekend breaks and a week’s holiday. Any offers of auction prizes will be most welcome.

Guests are welcome, but priority will be given to members. If you would like to sit near another member then please inform us and we will try to arrange the seating plan accordingly, but cannot guarantee being able to meet everyone's requirements.

We encourage members to book by cheque but you may also book online through Eventbrite.