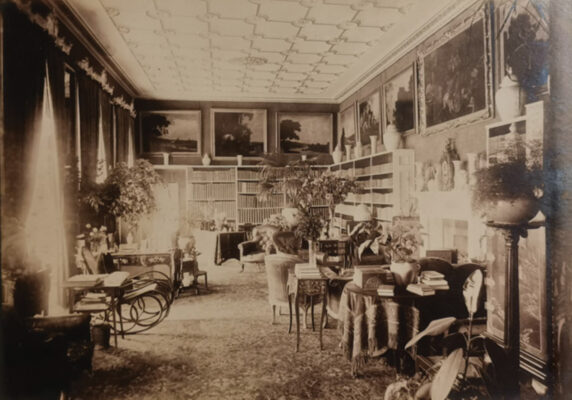 This is the eighth and penultimate talk in the Irish Georgian Society's nine-week autumn lecture series, Georgian Homes: material culture of the domestic interior in 18th century Ireland.

Abstract: This paper will provide an overview of libraries in aristocratic and gentry houses across Ireland, covering the period from the seventeenth century down to the dispersals and destruction of the late nineteenth and twentieth centuries. Focussing on questions of assembly, function, and use, it will also touch on architecture and interiors, as well as considering the economic and political underpinnings of these mostly lost collections – and the changes which led to their demise.

Dr Mark Purcell is Deputy Director for Research Collections at Cambridge University Library, a Bye-Fellow at Pembroke College, Cambridge, and a University Proctor. A Fellow of the Royal Historical Society, and a former Vice-President of the Society of Antiquaries, he has a particular interest in libraries in British and Irish country houses, and was Libraries Curator to the UK National Trust from 1999 to 2015. His book The Country House Library was published by Yale University Press in 2017.

This is the eighth talk in the Irish Georgian Society's autumn lecture series, Georgian Homes: material culture of the domestic interior in 18th century Ireland which explores the material culture of the Irish Georgian house, in both town and country, focusing on interior decoration, furniture and fine art. The talks will examine the manner in which these furnishings and decorations responded to the use of the interior spaces by their inhabitants; reveal the influences on their stylistic evolution; reflect on the province and economics of materials and manufacturing methods; and consider how the presentation of decorative finishes and objects in domestic settings acted as social signifiers of the inhabitants’ taste and status. The talks, which will examine the presentation and decoration of the homes of the elite and ‘middling’ sorts, will provide an overview of objects and collections that were designed and manufactured by native and foreign craftsmen and artisans, both in Ireland and abroad.