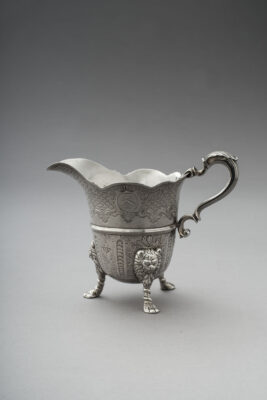 This is the third talk in the Irish Georgian Society's nine-week autumn lecture series, Georgian Homes: material culture of the domestic interior in 18th century Ireland.

Silver in Georgian Dublin: Objects in Context by Dr Alison FitzGerald, Associate Professor in the Department of History at Maynooth University.

Abstract: This talk will consider the market for silver goods in Georgian Ireland, the types of objects which were in demand, and the contemporary sources, from guild records to newspaper advertisements, which facilitate our understanding of the context in which these wares were produced and consumed.

Dr Alison FitzGerald is an Associate Professor in the Department of History at Maynooth University. She has published extensively on the market for silver in eighteenth-century Ireland; her monograph Silver in Georgian Dublin: making, selling, consuming was published by Routledge in 2016 (pbk 2019) and she is the editor of Studies in Irish Georgian Silver (Four Courts Press, Dublin, 2020). She is a Director of the Castletown Foundation, a member of the academic advisory board for Irish Architectural and Decorative Studies, and Secretary to the Antique Plate Committee of the Company of Goldsmiths of Dublin.

This is the third talk in the Irish Georgian Society’s nine-week autumn lecture series, Georgian Homes: material culture of the domestic interior in 18th-century Ireland which will explore the material culture of the Irish Georgian house, in both town and country, focusing on interior decoration, furniture and fine art. The talks will examine the manner in which these furnishings and decorations responded to the use of the interior spaces by their inhabitants; reveal the influences on their stylistic evolution; reflect on the province and economics of materials and manufacturing methods; and consider how the presentation of decorative finishes and objects in domestic settings acted as social signifiers of the inhabitants’ taste and status. The talks, which will examine the presentation and decoration of the homes of the elite and ‘middling’ sorts, will provide an overview of objects and collections that were designed and manufactured by native and foreign craftsmen and artisans, both in Ireland and abroad.