The following is part of a fond tribute penned by the late Dr Nicola Gordon Bowefor Jeremy Williams who died on Christmas Eve 2015, which was reproduced in the 2016 edition of the Irish Georgian Society Review. Talented, idiosyncratic, and mourned, his friends and admirers contributed to a memoir Jeremy Williams: One of a Kind (2020) to remember a singular man and the Irish Architectural Archive on Merrion Square mounted an exhibition of his work, the drawings from that show can be viewed online on the IARC website, and which we've shared below. 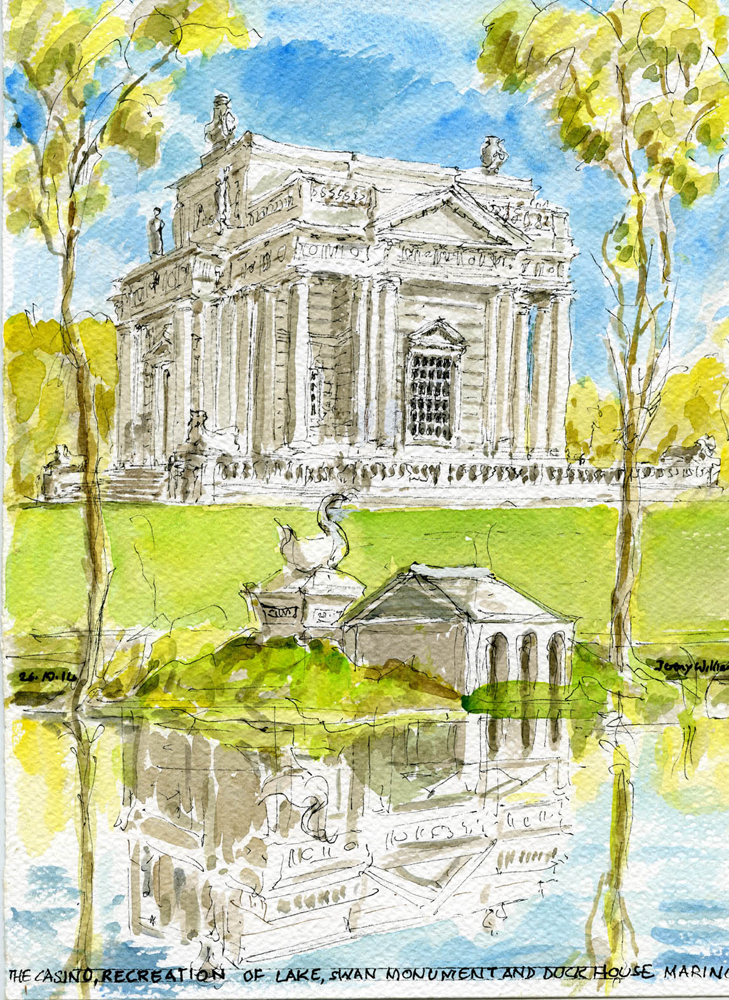 The Casino at Marino (Courtesy of the Irish Architectural Archive)

What a wonderful tribute to Jeremy that so many of the friends, colleagues and clients garnered on his continual peregrinations throughout Ireland, Scotland, England, Europe and beyond should have assembled in memory of a dear, faithful, loyal and generous friend. We all know Jeremy would go anywhere for a good party, and it is our great loss that he isn’t here to enjoy this one. Like you, I still can’t believe that Jeremy really has gone, suddenly and unexpectedly, leaving the life he relished so fully, and that we shan’t see his ubiquitously welcome face, hear his excitedly crescendo-ing voice, helpless laughter, and enjoy his familiar company again. But perhaps it’s fitting that, if he had to leave us, it was after a pre-Christmas supper with old friends, and on the doorstep of the book-lined Victorian house overlooking the 18th century graveyard of St. Catherine’s in the Liberties; the house which a legacy from his grandmother had enabled him to acquire years ago as his eyrie and architectural office.

I first met him at an arcane Trinity Arts Society lecture, organized by George Wynne Willson, on ‘Op- Gothic Architecture’. Architecture was Jeremy’s greatest love, the result of lifelong explorations, first on a bike as a student; then on a scooter; by Eurorail and in a succession of cars which came after the pea-green one he inherited from his grandmother, replete with a silver lamé eiderdown in the back - into which he would burrow on overnight trips. An open gate (as they mostly were then) leading up to a classic house of the middle or larger size or, even better, a castle served as an invitation to investigate what lay at the end of the drive. As many of you know, not only was he great fun on such explorations, but also a brilliantly informed guide. I remember him, en route to the Laois Hunt Ball, hoisting the front wheels of his car up onto a rockery, to give his passengers a headlight-illuminated introduction to the ground floor plasterwork of a house whose occupants had already left for the Ball – when suddenly suspicious Gardai arrived! Others remember him reversing erratically to look at a house he’d missed, quite oblivious of the queue of cars behind him frantically doing likewise!

As he travelled the length and breadth of this country, which he knew inside out, he recorded in his wonderfully assured spidery drawings the exteriors and interiors of buildings – some threatened, others re-imagined by him with the fine rococo plasterwork ceilings he rescued and successfully re-installed with the help of stuccodore Tommy Leydon. A devotee of the Irish Georgian Society, his concern about the ubiquitous threat to Victorian buildings in Ireland, led to the formation of the Irish Victorian Society in 1974 as an informed conservation pressure group. 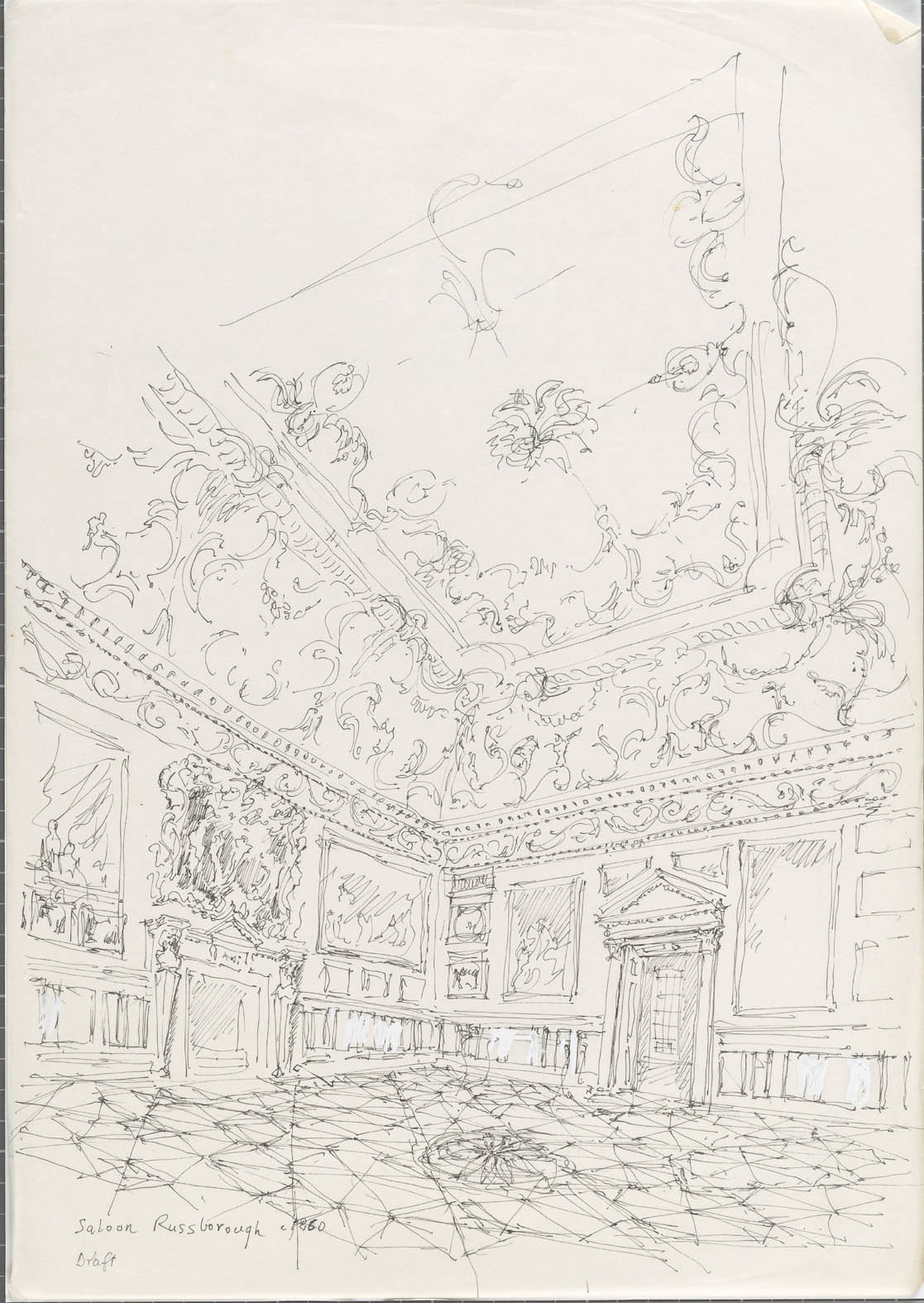 His many clients valued his unique ability to seamlessly incorporate the old with the new. For them he matched his inspired references to historic architecture with the workmanship of his team of builders and artist/ craftspeople, using carefully chosen materials, salvaged and new. For the extent of his work, witness the sheer quantity of job files, which are to be housed along with their attendant drawings and his impressive architectural library in the Irish Architectural Archive. On his ceaseless expeditions at home and abroad, in search of architecture and the music he loved to see and hear performed, he would establish temporary roosts, making often unexpected connections from his wide reading and first-hand knowledge, contributing ever-creative - but guileless - gossip, entertaining and relishing the company of those he met. Travels to India, Morocco, Hungary, Czechoslovakia and Egypt with friends opened new horizons beyond his beloved Belgium, Germany and France. As long as Jeremy had his overnight bag, his sketchbook, pencils and pens, his radio, and current reading matter or writing material, he was in his element. Like Montaigne, his thoughts seemed to go to sleep unless they and he wandered.

His magically romantic drawings were published in books which reflect his unique knowledge and sketching skills: in 1989, Renagh Holohan’s The Irish Chateaux; in search of the Descendants of the Wild Geese, for Lilliput Press; in his privately printed illustrated record of a grand weekend Shooting Party at the Chateau du Fayel in 1994; and the same year, in his invaluable county-by- county Companion Guide to Architecture in Ireland 1837-1921 for Michael Adams’ Irish Academic Press. In the introduction, the eminent architectural historian Mark Girouard acknowledged Jeremy’s gift, notable in the best gazetteers, of “providing compulsive browsing” while “making the buildings which he describes seem desirable” by illuminating “them with a few deft phrases”, bringing them to life with engagingly idiosyncratic references to the people who built them and lived in them. Nearly four years ago, his carefully selected retrospective of 160 Watercolours and Drawings mounted at Damien Matthews’ majestic salerooms in Dublin’s Capel Street emulated the desire Jeremy shared with the late Knight of Glin - to see Joseph Leeson’s vision “of an Italian palace by a German architect embellished by Swiss stuccodores and Irish craftsmen” re-instated in their original settings in the seven principal interiors of Russborough. The exhibition featured other original re-constructions of richly stucco’d interiors, lost staircases, what he deemed Dublin’s “ten most beautiful reception rooms”, Gothick follies, neo-Palladian fantasies, rustic retreats, and sections illustrating the creative “Spell of Steel” and the “Lure of Resin”. The works on show concluded with homages to the work of his sculptor friend and craftsman/builder colleague, David Durdin Robertson at Huntington, Kilshannig and Clonmannon, and to Tommy Leydon’s skillfully transplanted stucco ceilings.

Let us hope that Jeremy is orchestrating celestial picnics amongst Arcadian follies, regaling his beloved mother, and admired fellow free-spirits such as Mariga Guinness, Jelena de Belder, Christel Boorman and Aggie Bernelle with fantasies loosely drawn from life on earth. 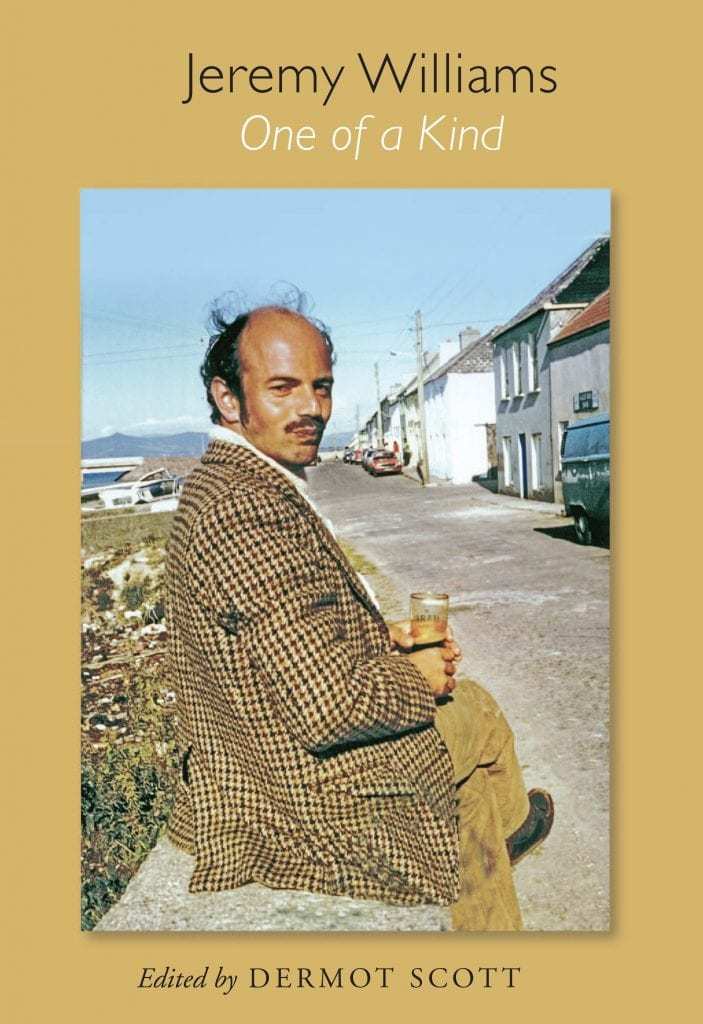 Jeremy Williams: One of a Kind, edited by Dermot Scott and published by Lilliput Press (2020) is available from the IGS Bookshop.