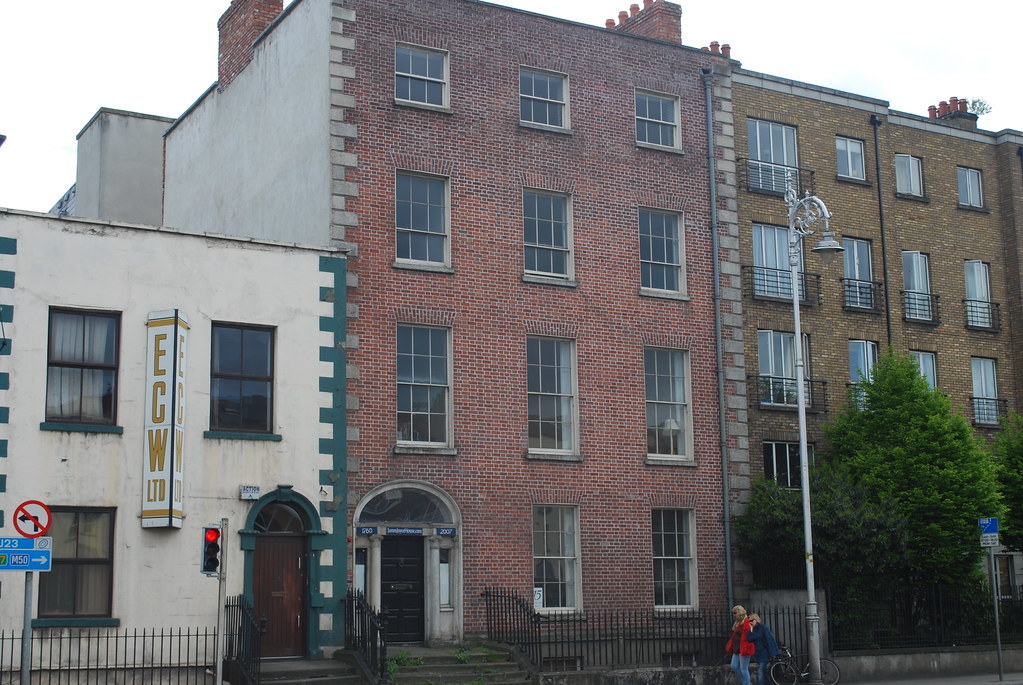 Re. Planning application for no. 15, Usher's Island, Dublin 8 (protected structure)

This planning application proposes to change the use of an eighteenth-century house of national heritage and cultural importance from a visitor centre to a hostel with spaces for 56 no. beds and a café at basement level, for associated demolition and construction works, and for the provision of new mechanical services.

No. 15 looks c. 1800 but is evidently a house of c. 1775 built for a grain merchant, Joshua Pim. A standard three-bay house of four storeys over a basement and two-room plan with simple Neoclassical interior detail. It is celebrated as the setting of Joyce’s short story The Dead, and in the 1890s it was home to Joyce’s grand-aunts. Recently restored.

The National Inventory of Architectural Heritage identifies the building as ‘James Joyce House of The Dead’ ( Reg No 50080346) and describes it as being of National interest. It adds the following appraisal:

… It was used in 1987 by John Huston as the set for the film version. Its proportions and decorative doorcase are typical of Dublin Georgian townhouses. Together with numbers 12 and 14 it contributes positively to the historic character of the south quays, occupying a prominent position which closes the vista from Blackhall Place and the James Joyce Bridge. It has been recently restored, and its top storey reinstated.

The Irish Georgian Society wishes to raise the following concerns it has about the development proposals.

As a protected structure of National interest, it would have been expected that comprehensive details of all the proposed works would have been provided with the planning application. While it is noted that the Impact Assessment identifies issues that could be considered during the planning process, the Irish Georgian Society is of the view that these should have been resolved at an earlier stage. Of particular concern is the need to fully resolve the following:

Proposals for physical interventions and substantial additions to protected structures can be weighed up against and justified by the benefits of the intended end use of the building. In this case, the applicants propose to create new openings to the rear of the house at ground, first and second floor levels resulting in the loss of historic fabric and character, and to construct a new extension over four storeys. The Irish Georgian Society is of the view that the proposed intensive use of the house as a 56-bed hostel does not provide sufficient justification for the extent of these significant interventions.

No. 15 Usher’s Island was built nearly 250 years ago and was not designed or constructed for intensive daily use. The Irish Georgian Society is of the view that the heavy foot fall that would arise from the building’s development as a 56-bed hostel would have an incrementally detrimental impact on its historic fabric. This would be contrary to the best interests of the protected structure and would be contrary to good conservation practices.

No. 15 Usher’s Island is designated as a protected structure (ref. 8198) in the Dublin City Development Plan (2016-22). The Plan contains the following provisions regarding the use of heritage buildings:

Identifying suitable and viable uses for certain heritage buildings can be a challenge and since an appropriately occupied building is the best way to ensure its protection, the development plan should reflect this and facilitate such appropriate uses, where these support the over-arching conservation objective [emphasis added]. (p. 182)

Changes of use of protected structures, which will have no detrimental impact on the special interest [emphasis added] and are compatible with their future long-term conservation, will be promoted (CHC2, p. 186).

The Irish Georgian Society is of the view that the proposed intensive use of No. 15 Ushers Island as a 56-bed hostel would not comprise an appropriate use for this building of national heritage and cultural importance and furthermore that it would have a detrimental impact on its special interest. On these grounds we recommend that permission be refused.