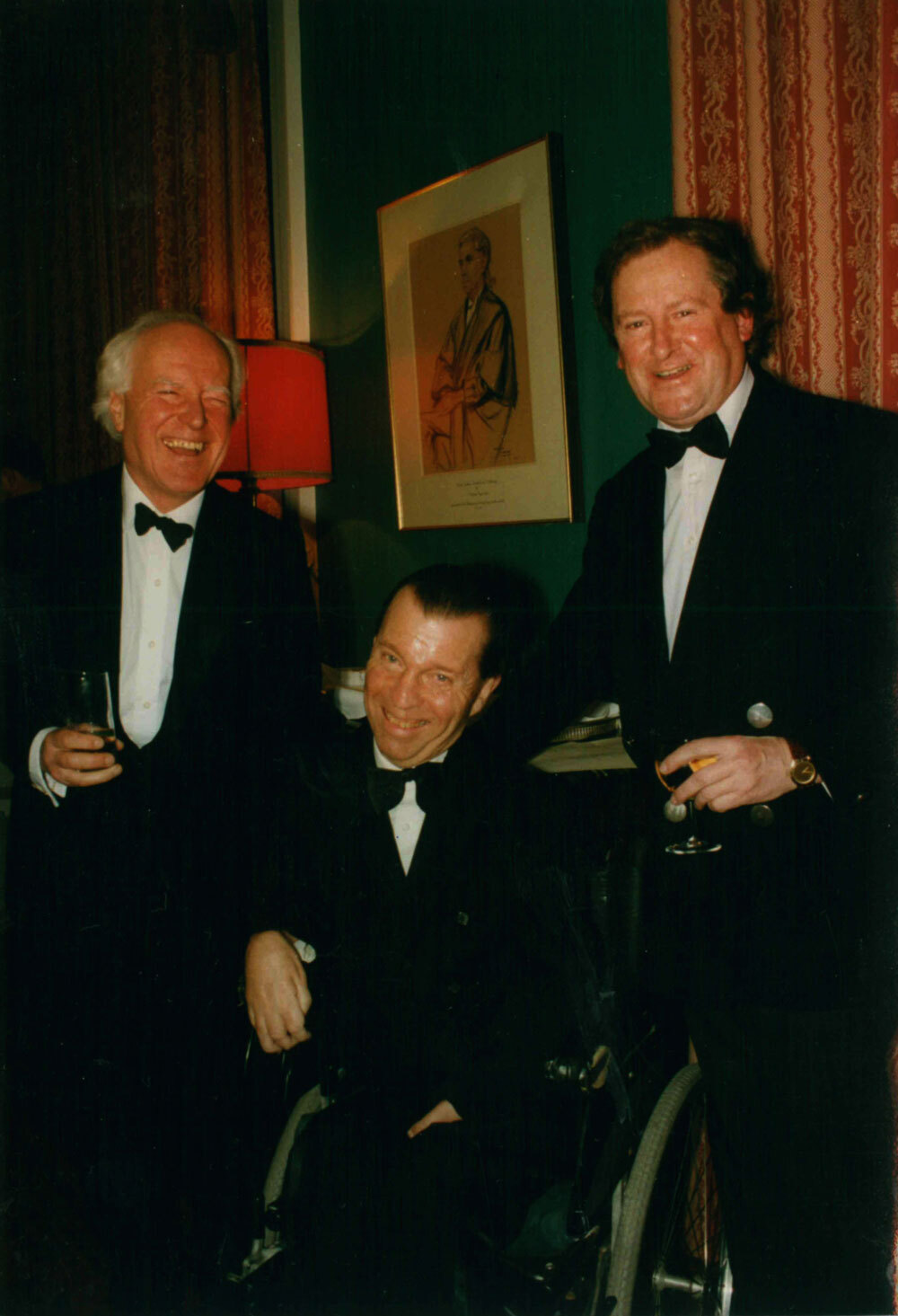 Desmond Guinness, Lord Dunraven and the Knight of Glin at the IGS Ruby Anniversary dinner in New York, 1998

No-one could engage a room full of A-list Americans better than Desmond Guinness. Despite his mythic pedigree and nonchalance of rustic Irish nobility, his genuine aristocratic bearing was tame and user friendly. His soft elegance was immediate and overflowing with a natural charm. Not unlike his dearest aunt, Debo, the late Duchess of Devonshire, the youngest Mitford girl, his mother’s sister.

My affection for Desmond had no end, not unlike some lunches at Leixlip Castle. Often, Americans would appear there, hosted to hilarity in the dining room with organic Irish salad and vegetables from the garden and crowdpleasing cheese soufflé from the cookery of the great Eileen Byrne. Sprinkle in some of the plentiful vintage French wines Rosie O’Neill always carried along with her to such lunches and you have the recipe for smiling contentment in dear Desmond. An Irish winter might be beating against the vintage windows, but roaring fires and warm table talk always chased away any chill. Americans inevitably discovered a hidden, unique slice of Ireland, surprised to discover how very near the 18th century actually was to them. So you never minded reciting a few lines of Irish verse as the custard dishes were cleared. Or conjuring up a yarn to leave the lunch guests in stitches. Around the table Americans always received a healthy dose of Desmond’s sparkling Mitford blue eyes, always the icing on the cake.

In Chicago, Desmond’s arrivals for Irish Georgian events over the decades were treated as state visits; an evening with the princely founder, always magical. At the Casino, the city’s most refined and understated deco style club, few worth their salt passed up the chance to nibble on buttery cheese straws with their cocktails before listening to the sparkle of Desmond’s wit and wander through the hair-raising story of Irish architectural preservation. The “swelligant” Irish were charmed and beguiled as he raised the predicaments of Europe’s most refined designs, threatened by the madness and carelessness of cultural blindness. As the vichyssoise was served, Desmond would say the words that let the scales fall from once blind eyes. And the patrimony of his homeland moved closer, one great house at a time, to safety and conservation. Desmond’s was a charm offensive as bold as the first Normandy landing in Ireland, in 1169 A.D.

Americans were enriched by Desmond because he invited their support in preserving beauty and high Irish art. We were awed by his commitment and intelligence in mapping out a significant plan for saving the grandeur of Ireland’s treasured past. I once rang Desmond from Dublin asking to rent one of the cottages on the Leixlip demesne for a week or ten days. “No,” he said, to my utter surprise. “But you can come and stay at the castle for as long as you like.” I did. And had the time of my life. One evening the castle filled up with friends making their way back to England by ferry. They stopped for the night. Eileen prepared a worthy meal, served in the kitchen by the warmth of the AGA cooker. Roast beef, soufflé and roast potatoes. Bowls of red currants from the garden with cream followed to finish. I needed to summon the best of the Yank in me for the company. A woman whose mother had been a lady-in-waiting at Queen Elizabeth II’s coronation sat beside me. She had two titles. A well equipped woman. With lots of questions. She asked me if I had been at school with Desmond. He’s actually many years my senior. He shook with laughter, bobbing his head and said, “Oh no. Tom was a few years behind me.” We all laughed. Pure Desmond. Helping everyone save face.

Early one morning, my phone rang in Dublin. A soft voice said, “Sorry, it’s Desmond.” I said, “No problem, I was going to ring you later about our lunch.” “Lunch?” the voice said. “When?” “Well today,” I said. “Oh no,” he said. “I never penciled it in. But I am free.” “Good,” I said. “L’Ecrivan at noon. With Rose.” “Wonderful,” he said. “See you then.” I went back to sleep. When I arrived at the restaurant I saw the Knight of Glin, patiently waiting. I said, “Desmond, I’m so glad you rang this morning. I would have hated to miss you.” “But,” he said, “I never rang.” Then the door opened and Desmond Guinness came in, all apologies for having called me so early. Too polite to say he never received the invite. We all roared at the Irish Georgian dilemma of knowing too many Desmonds. Rose was most amused.

Tom O’Gorman lives in Chicago and is a longtime IGS member. He is also an artist and writer. This was originally featured in the Irish Georgian Society Review (2020).