The following article is taken from the 2017 edition of the Irish Georgian Society Review, our annual members' magazine. 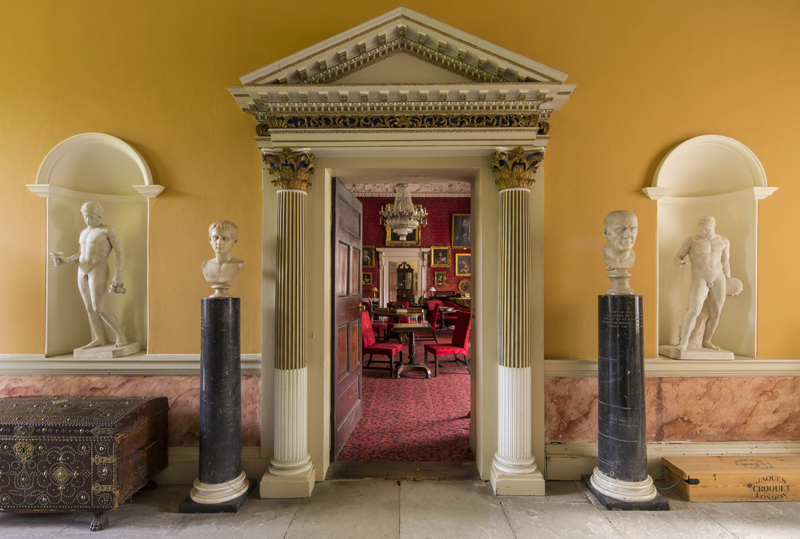 Described by a Beresford relation as “clever and agreeable & the most gifted of all [her] Sisters”, Lady Betty Cobbe, rather than her husband Thomas, has been credited in family tradition as the eye and mind behind the furnishing and beautification of Newbridge House during the 1750s and 60s. She and her husband had been given the house on their marriage in 1755, newly rebuilt to the designs of James Gibbs by Thomas’s father, Charles, Archbishop of Dublin. 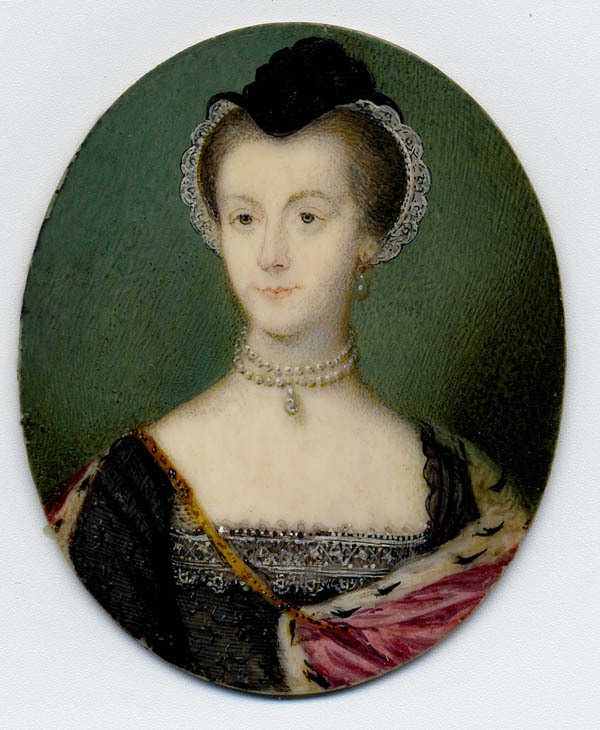 Notwithstanding, Lady Betty, the youngest of the six daughters of Marcus, Earl of Tyrone, leaves an almost invisible footprint in the extensive Cobbe papers. An account book given her in 1756 by her father- in-law, the Archbishop, she kept up for a dozen pages or so before she handed it to her husband. Those few pages, a couple of letters concerning property or financial matters and inscriptions of her name in a number of her books, are all that survive of her handwriting.

From Thomas there is much more. There are a diary, a commonplace book and letters from which to form an idea of his character. It is thanks to his detailed accounts for the periods 1756–65 and 1783–1810, and, above all, the high survival rate of their pictures, furniture and chattels at Newbridge, that the taste of the couple becomes manifest. In the accounts we see them enlivening the somewhat sober character of the Archbishop’s house with ornamental urns and eagles to the exterior, and stuccowork, paintings, porcelain, silver and furniture within.

That Lady Betty was a strong character can be seen in the large Beresford family group painted by John Astley at Curraghmore, where she takes centre stage amongst the nine adult children arranged around their parents. We know that, like her husband, she was musical and would possess at least two harpsichords, a spinet and a forte piano by the Saxon maker Ferdinand Weber, who established himself in Dublin in 1749. Did she commission the painting by Zoffany of her eldest brother,George, 1st Marquess of Waterford, in the Cobbe Collection, or did he present it to her? Was she the real inspiration behind her husband’s collection of Dutch and Italian Old Masters, for which they added to Newbridge in 1764 a large drawing room that served as a picture gallery? The room was added to the old house, entered through a grand Corinthian doorcase in a vestibule with niches for sculpture on either side. 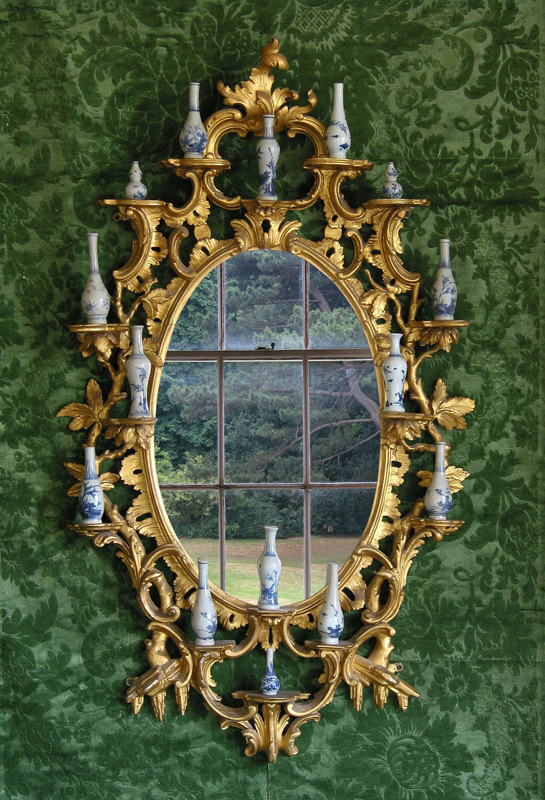 Their great room, with exuberant stuccowork by Richard Williams, was hung exclusively with Old Masters, including works by Hobbema, Ruysdael, Gaspar Dughet and Van de Velde. An unusually large Dutch interior masterpiece by the obscure Johannes Voorhout, sold in Paris in 1764 a few months prior to the completion of the room, is notable; from the same Paris auction came a particularly fine Italianate landscape by Abraham Begeyn. While Dutch pictures predominated, Italian masters included a fine Guercino, St. John the Baptist, and a Venetian rendition of Bernardo Strozzi’s Concert. In these purchases the couple were assisted by the Archbishop’s private secretary, Matthew Pilkington, vicar of the estate village of Donabate and author of the Gentleman’s and Connoisseur’s Dictionary of Painters published in 1770, the first work of its kind in the English language. There was a campaign of carved and gilt Dublin- made frames, some in livery types, and others individually conceived, though not as elaborately showy as some documented Irish frames of this period.

The walls of the general ground floor rooms of the original house were hung with Cobbe family portraits, many also fitted with livery frames, to which Lady Betty added two oil portraits of herself and introduced, as well as the Zoffany of brother George, portraits of her two other brothers, John and William, by Robert Hunter and Hugh Douglas Hamilton respectively, together with miniatures of their wives. Now it is Thomas who is near-invisible— two tiny miniatures and a small-size oval gouache in gouty middle age are his only surviving likenesses.

The ordinary rooms on the piano nobile were also provided with ornamental plaster by “Williams the stucco man”, who was so much employed at Newbridge that he actually got married there to the Cobbe children’s nurse. In 1761, one of the rooms was hung with Chinese painted paper panels linked with a treillage of cut-out bamboo and fitted out as ‘ye Ark’, or Cabinet of Curiosities. For this, Lady Betty’s initial purchases had been not- insignificant sums laid out on exotic shells—perhaps unsurprising, given that in the years preceding her marriage, she had doubtless assisted her mother, the Countess of Tyrone, with the shell house at Curraghmore. 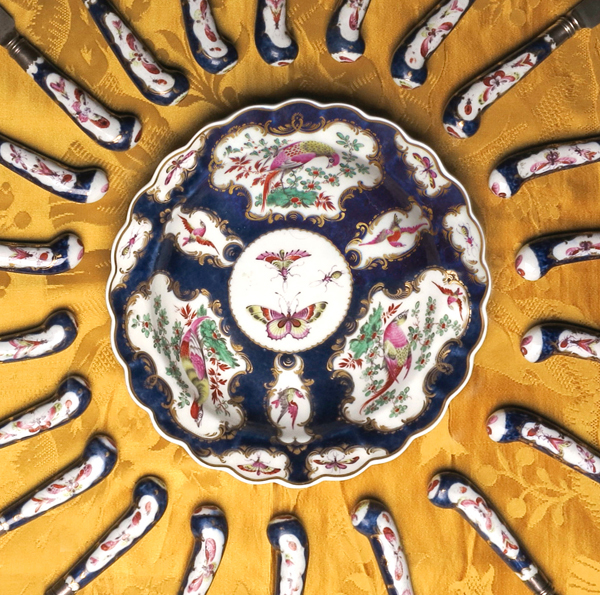 A plate and cutlery handles from the Cobbe Worcester service, c. 1763, Cobbe (Photo by Alexey Moskvin)

In 1758, during a sojourn in London, the couple had bought quantities of porcelain, both Chinese and English Bow and Derby. Exceptionally large Chinese pots decorated in rouge de fer, have Thomas’s initials fired into the inside of the lids, so were probably a special commission. On their journeys to Bath they stopped over in Worcester, visiting the newly established porcelain works and commissioning one of the largest Worcester dessert and dinner services on record, complete with matching porcelain handles fitted to Irish cutlery. Some of the many rococo carved gilt looking glasses they had made, were fitted with little platforms to display porcelain. China figures and vases were also placed on gilt wall brackets, one incorporating a figure of Apollo and a swan (doubly appropriate since the Cobbe heraldic devices are swans). This must have originally had a pair with the figure of winged Victory, since an original pair survive at Felbrigg; they are attributed to the London sculptor John Cheere, and therefore the Cobbes probably bought theirs during the 1758 visit to the capital. 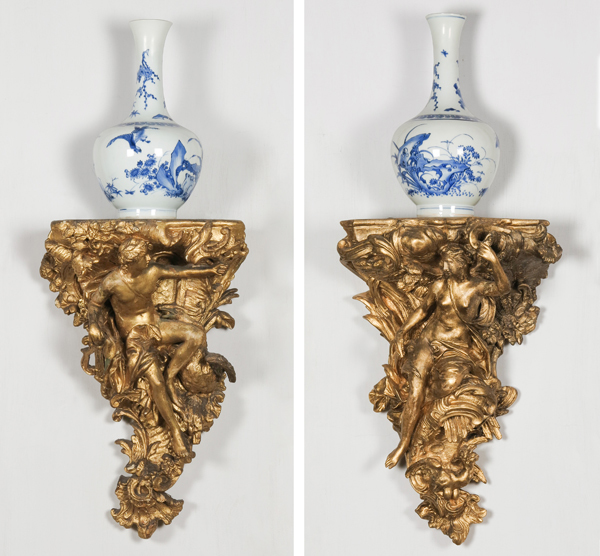 Wall bracket with figure of Apollo, attributed to John Cheere, plaster, 1758, with a replica of its pair moulded from Felbrigg Hall, Cobbe (Photo by Alexey Moskvin)

In his approach to the works at Newbridge, it is clear that Thomas had inherited some of the reticent characteristics of his father, who commissioned one of the greatest architects of the era to build a relatively modest villa, having rejected an initial palatial proposal on the scale of Leinster House. Their expansion of the house to some extent palatialised it inside, but again, although this resulted in one of the grander interiors in Ireland, the furniture they commissioned for it, and elsewhere throughout the house, was restrained. While the collection of pictures was extensive and contained fine works, it was by no means extravagant by the standards of the age. Nothing in Newbridge has the flamboyance of the Milltowns at Russborough. With her ancient Norman and Irish lineage, his of three centuries of solid Hampshire squirearchy, and no shortage of cash, they chose to eschew over- ostentation. We will never be quite sure, though, whose was the dominant taste of the two.

Thomas and Lady Betty were to suffer acute financial reversals towards the end of the century due to mismanagement of his estates. Despite these, or perhaps because of them, what they created at Newbridge survives largely intact, having escaped the dangers of 19th- century wealth and ‘improvements’. This is strikingly illustrated by a comment in Frances Power Cobbe’s autobiography of 1894: “So far was Newbridge from a Castle Rackrent that though much in it of the furniture and decorations belonged to the previous century, everything was kept in perfect order and repair”.

Alec Cobbe divides his time between Newbridge House, where he grew up, and Hatchlands Park in Surrey, combining his conservation activities with the design of historic interiors and practice as an artist.

All images above are copyright to their owners and should not be reproduced without permission.