‘The Entire Spectrum of Ireland’s Post-Medieval Architecture’: 21 Years of the IGS Journal 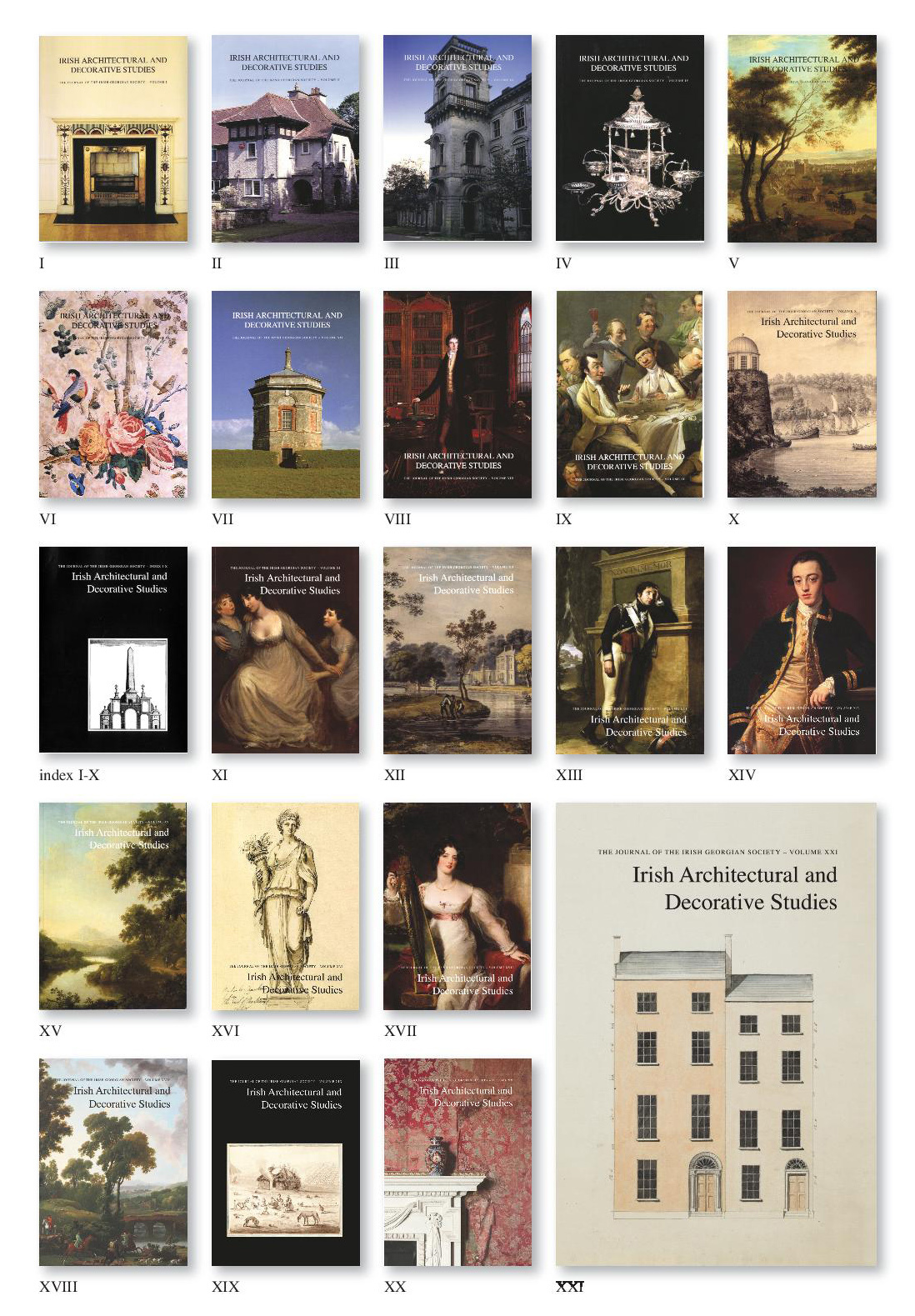 On 15 May the City Assembly House was full to capacity for a twenty-first birthday party for Irish Architectural and Decorative Studies, the Journal of the Irish Georgian Society. Another exciting volume under the editorship of Prof. Finola O’Kane was launched by Prof. Andrew Carpenter, founding editor of Eighteenth Century Ireland and general editor of the five-volume Art and Architecture of Ireland published in 2014.

The Irish Georgian Society has been publishing research on Ireland’s art and architecture from close to its inception in 1958, initially through its Quarterly Bulletin. In the first volume of IA&DS, Desmond Guinness, co-founder of the Society, told the story of how the bulletin’s much-loved design was, rather serendipitously, arrived at:

The white and gold organ in the salon at Carton had been installed in 1857, and the Music Association of Ireland arranged a concert to celebrate its one hundredth anniversary while we were living there. It struck me that the programme was very elegantly printed, in a beautiful typeface, using red and black on a handmade cream paper. We were told that the Dolmen Press had printed it, and, when in 1958 we started to plan the Quarterly Bulletin, we went to Liam Miller, who owned the Press, and he agreed to undertake the printing for us.

In 1998 a decision was made to expand the format and, with Seán O’Reilly as editor, Irish Architectural and Decorative Studies was born. Gandon Editions of Kinsale has taken over the mantle of Dolmen Press and has produced and beautifully designed all twenty-one volumes.

At the time of the launch of the rebranded Journal Desmond Guinness explained its extended remit: ‘The new manifestation of the Bulletin acknowledges the importance of the entire spectrum of Ireland’s post-medieval architecture and its special need for protection, interpretation understanding and appreciation’.

Some years later the Knight of Glin again articulated the centrality of the Journal to the IGS: ‘The scrupulous scholarship that the Journal promotes, permeates and informs all our activities’ indeed, he argued that the Journal was ‘one of the things that most differentiates the Irish Georgian Society from other heritage and conservation bodies’.

With these statements of intent the ‘Two Desmonds’ set a hugely ambitious goal for the Journal – to explore the whole of Ireland’s post-medieval art, architecture and material culture – but one which over twenty-one years it has triumphantly fulfilled. Toby Barnard describes the Journal as the first ‘port of call’ for researchers in the field while the catalogue of the great Chicago exhibition of Irish art held in 2015, noting the Art Institute’s collaboration with the IGS on the show, described IA&DS as ‘at the forefront of research into the material world of Ireland’. 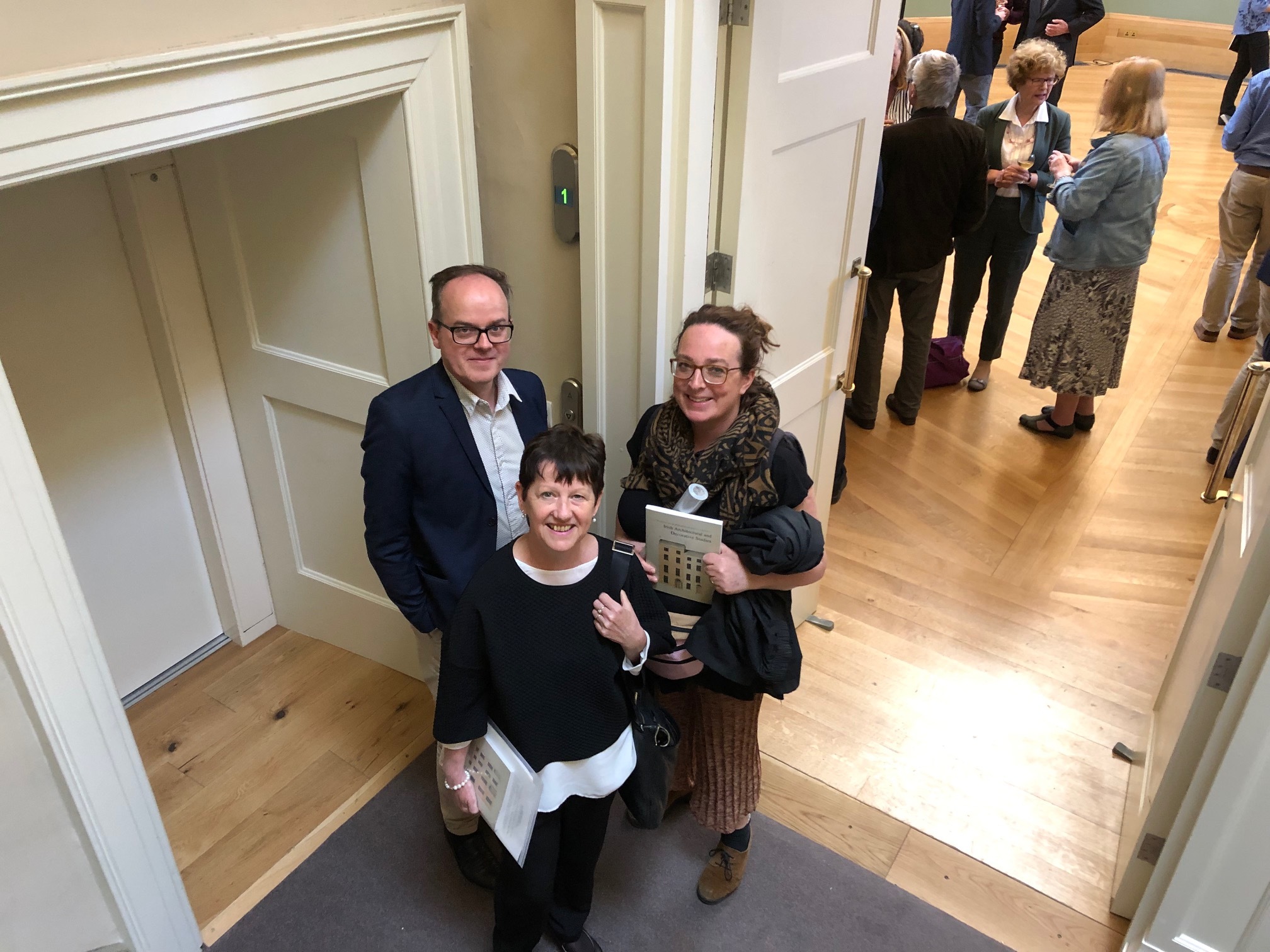 It seems that every significant figure working in the fields of Irish architecture, gardens, painting and the decorative arts has contributed to its pages, notably including Toby Barnard, Mairead Dunlevy, Christine Casey, Alec Cobbe, Jane Fenlon, Eileen Harris, the Knight of Glin, Nicola Gordon Bowe, Rolf Loeber, Desmond Guinness, Peter Harbison and Nicola Figgis, who in 2002 took over the editorship. The Journal has also published the work of subsequent generations of architectural historians including Kevin Mulligan, Finola O’Kane, Conor Lucey, Livia Hurley and Melanie Hayes, and scholars of material culture, perhaps most notably Alison FitzGerald and Anna Moran. Importantly, it has also provided a platform for graduate students, and fledgling scholars at the beginning of their careers.

The generous length which the Journal allows its contributors – in contrast to the bite-sized articles that some other publications demand – gives room for scholars to explore complex material in detail, and the results have frequently been worked up later into monographs. Kevin Mulligan and Patricia McCarthy, for example, published their researches in several volumes of the Journal which were later expanded into notable books on the Irish country house generally, and Ballyfin specifically. Similarly David Skinner expanded his findings on Irish wallpaper, published here in Volume VI, into a much-praised book on the subject.

Eleven years ago, writing at the time of the IA&DS’s tenth anniversary, I noted the breadth of the Journal’s contents in its first decade: ‘Periods and topics range from Arts and Crafts in Kilkenny to medieval churches in south Leinster. There are article on individual building typologies from sporting lodges to railway stations, while material culture in its widest sense is explored – furniture, glass, fireworks and automata…while the histories of patronage, exhibiting and collecting are also discussed’. In the eleven years since then under the editorship of Finola and, immediately prior to that, Conor Lucey, the range of topics has only expanded, with research published on shops and shopping in Georgian Dublin; public lighting in eighteenth-century Cork; elite food culture in Ireland and private theatricals in Irish houses.

Stained glass, sculpture, furniture, silver, carriages, musical instruments, stuccowork, tapestries, photographic albums and bookbindings have all been the subject of articles as have all sorts of buildings: churches, follies, country and town houses, convents. Thematic studies have explored issues of estate development, exhibiting practices, art education, urban planning, and aspects of sociability from country house visiting to music and dancing. Architects including James Gibbs, Frederick Darley and James Pain and artists such as George Barret, Hugh Douglas Hamilton and Charles Jervas have all featured. Intriguing titles invite perusal: ‘an Irish Artist at the Bullfight in 1789’, ‘Bathing in Porphyry on the Banks of the River Liffey’ or ‘Piracy, Property and Politics’. 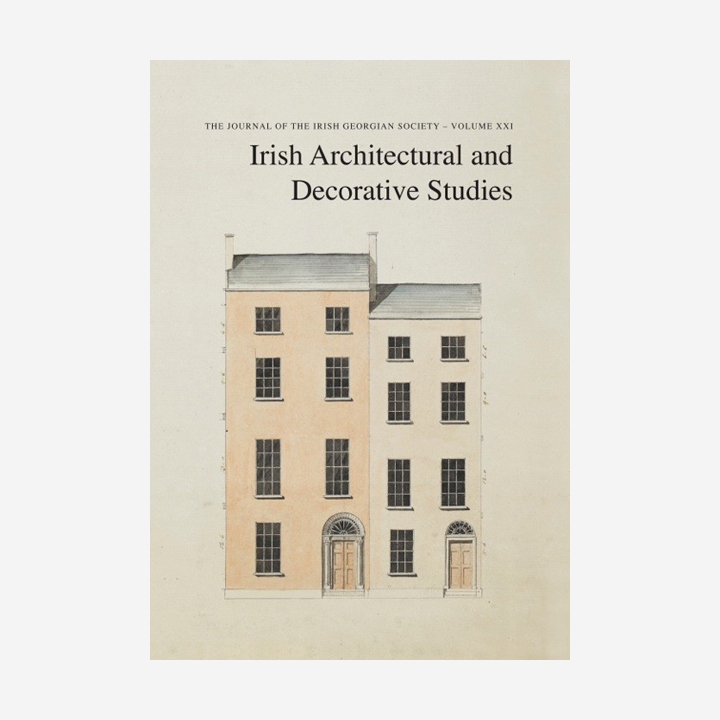 The current volume reflects this admirable diversity, though with something of a Dublin focus including, as it does, new research on the Wide Streets Commissioners; the Casino at Marino; the Custom House; the Dublin Society; newly discovered drawings by Hugh Douglas Hamilton relating to his well-known Cries of Dublin; the restoration by Richard Morrison of a Catholic chapel in Wicklow; the 1979 Taoiseach’s House competition, and the much-travelled artist from County Down, Helen Mabel Trevor.

Overseeing the Journal is a distinguished advisory board of leading scholars of art, architecture and design, its members drawn from TCD, UCD, UCL, Maynooth University, the National Gallery of Ireland, the Irish Architectural Archive and the National College of Art and Design. Although technically chaired by the editor, the board is genially presided over by Ireland’s senior architectural historians, David Griffin and Edward McParland. Eddie was once described by the Knight as the éminence grise behind the Journal and a remarkable six of the nine articles in the current issue acknowledge his scholarship in their footnotes. The IGS is delighted that the architectural historian John Montague has recently agreed to join the editorial board. [this still to be confirmed, one of the reasons I want to see a proof!]

IS&DS has been fortunate in attracting sponsors of enormous generosity who have enabled us to produce an expensive publication, the costs of which are not nearly covered by subscriptions. The Apollo Foundation, The Ireland Funds, the Mark Mitchell Fund, the Esmé Mitchell Trust, The Castletown Foundation, the OPW and the Schools of Irish Studies Foundations have all provided funding while for many years we received generous support from the J. Paul Getty Jr Charitable Trust and the Estate of the late Paul Mellon. The IGS is also immensely grateful to private donors who have helped cover the costs in recent years.

Following launches of the Journal in Dublin, Chicago, London, Limerick, Kilkenny and Castletown, next year we hope to launch (once again) in Cork with a volume highlighting new research on the architectural history and material culture of Cork city and its environs.

The Journal neatly straddles the educational and conservation remits of the IGS, as Desmond Guinness put it in the quotation above encouraging the ‘protection, interpretation understanding and appreciation’ of our material past and reminding of the deep seriousness of purpose of the Society which should never be forgotten. All members and supporters of the IGS’s goals are encouraged to subscribe.