The Irish Georgian Society and Castletown 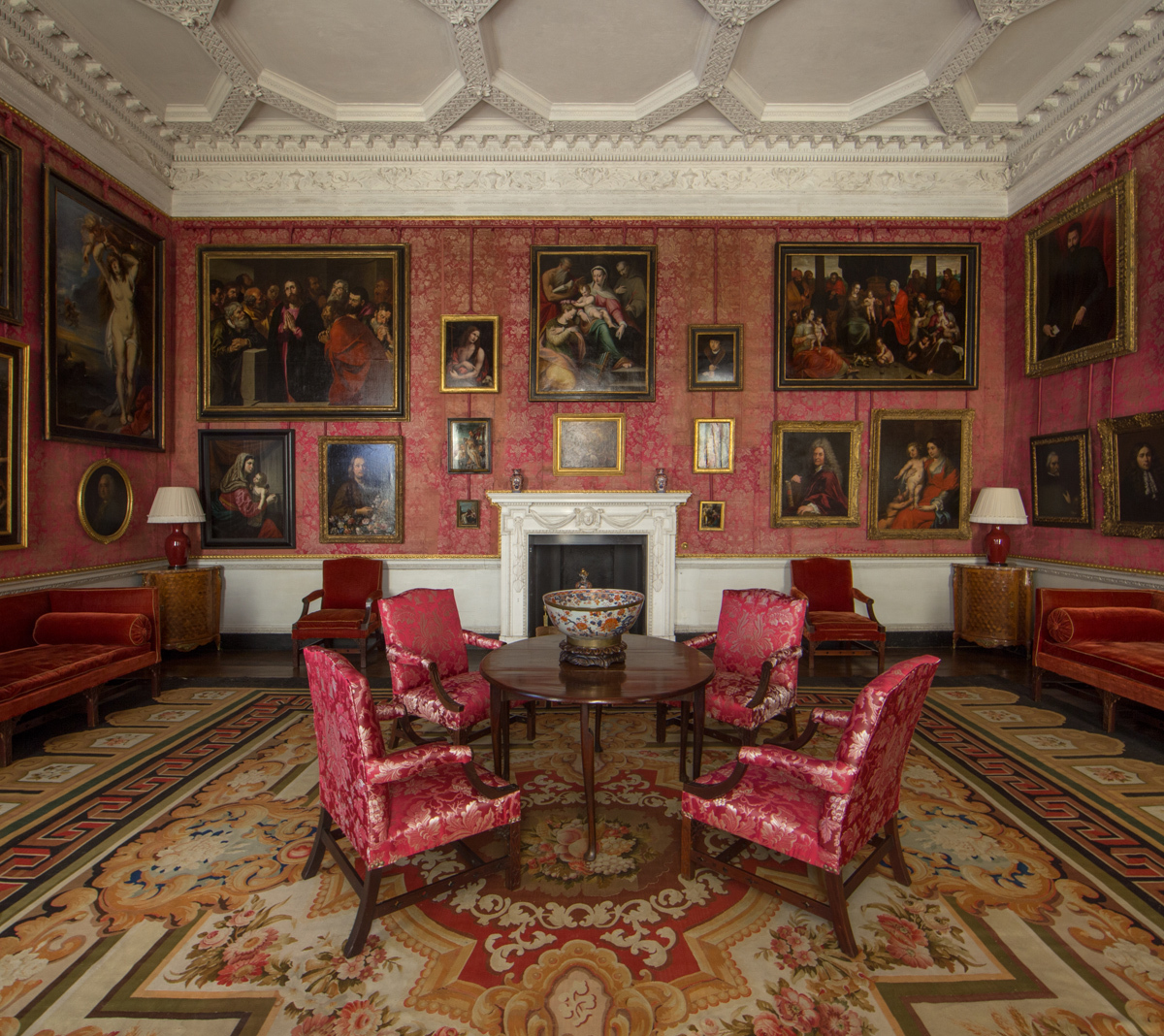 The Red Drawing Room, 2018 (Photo by Paul Tierney, The Office of Public Works)

On 23 June 2018, Castletown celebrated 50 years since it was officially opened to the public by Erskine Childers, the then Minister for Tourism, in June 1968. This year’s event was organised by the three bodies who have orchestrated the restoration during this period— – the Irish Georgian Society, the Castletown Foundation and the Office of Public Works. The event was held to acknowledge the involvement, much of it voluntary, of so many people during the past five decades. The trials and fun of the early days of clearing and restoration were outlined by Professor Roy Foster in his June address to the guests in the Long Gallery, but in particular he stressed the long and critical involvement of the Irish Georgian Society in securing a viable future for the house.

Today Castletown is of course State- owned and has, since 1994, been expertly conserved and developed as a cultural and tourist attraction by the OPW who run the house, aided by the Castletown Foundation in an advisory capacity.

With the passage of time and the advent of other projects, it is easy to forget that Castletown is the greatest success story of the Irish Georgian Society to date. The significance of the house and the scale of the project captured public attention in the late 1960s and gave the Society publicity and a definitive following, both in Ireland and abroad.

In The Irish Georgian Society: a Celebration (2008) Robert O’Byrne has chronicled the Society’s role in and heroic struggle to saving the house from 1967 when on its 10th anniversary in 1967, when it moved its headquarters from Leixlip Castle to Castletown. After Desmond Guinness had purchased Castletown and 166 acres, the house and its immediate surroundings were held by the Castletown House Co. Ltd., then by the Castletown Trust, and finally in 1979 by the Castletown Foundation, which achieved its own charitable status. Until the Society moved back to Leixlip Castle in 1983, Castletown was its principal focus, and even after that date the Society’s fortunes were inextricably linked in the public mind with that of the house. 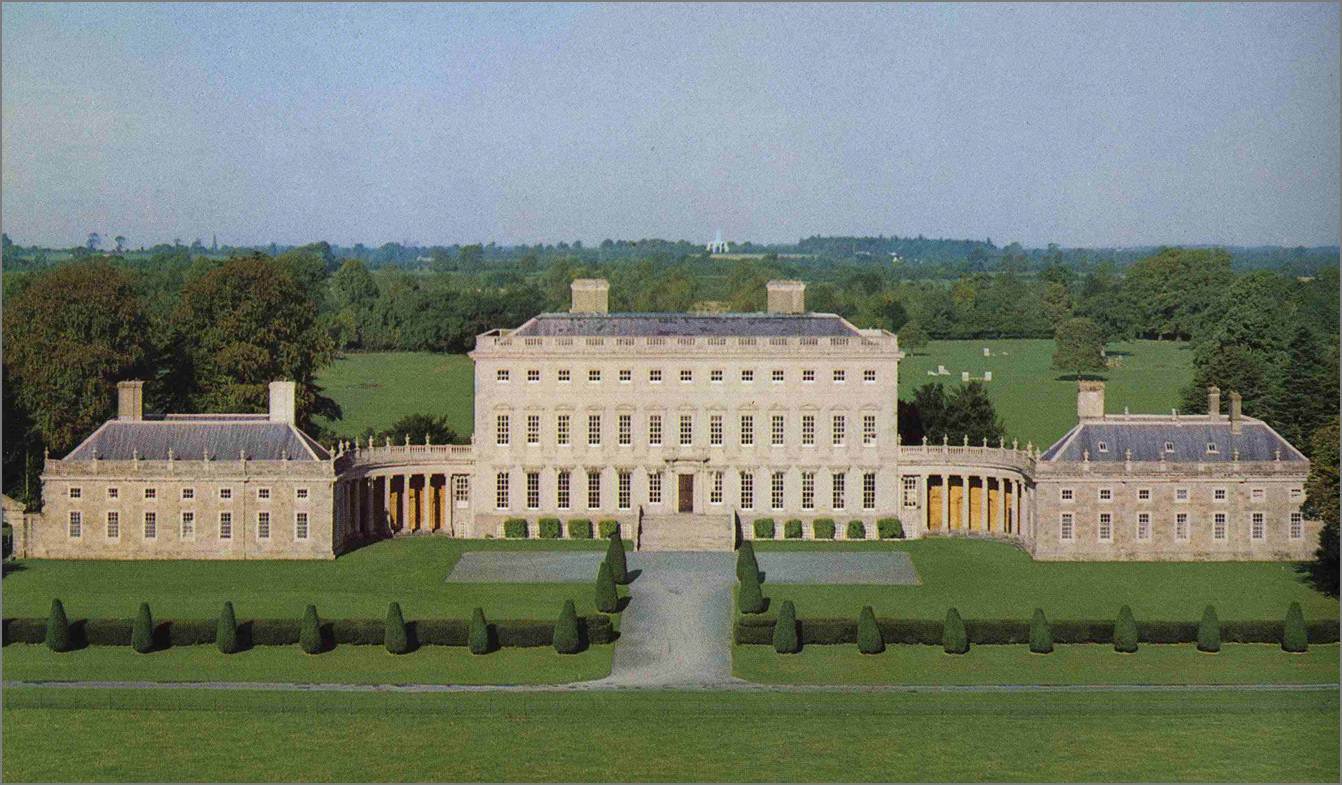 Castletown features in the earliest issues of the Bulletin: in 1962 there was a notice regarding the opening of the house, described as “one of the most fascinating houses in Ireland”, in August by the Conolly–Carew family, described as ‘one of the most fascinating houses in Ireland’; entry was 2/6d in aid of parish funds .The first issues of the Bulletin in 1958 featured the Conolly Folly on their covers, and throughout the 1960s, the publication frequently pictured engraved images of either the folly, the sphinx gate piers, or the Print Room photographed by Lucinda Lambton - indicating that the importance and fate of Castletown was firmly on the Society’s agenda. The first actual involvement in either Castletown, or indeed the first active conservation project for the Society, was the 1962-5 restoration of the Conolly Folly, then owned by Lord Brocket. The formula for future campaigns was immediately set: – a fund raising event lead by Mariga and Desmond, a public appeal with lists of subscribers, and ultimately contributions from Board Failte (now Failte Ireland) and a government Amenity Grants Scheme. When, in 1968, the Society bought the folly for £1,000, the funds came from Rose Saul Zalles, thus commencing the long American involvement in the saving of Castletown.

From 1967, many editions of the Bulletin chronicle the enormous task involved in readying the house for opening and the slow process of restoration. There was a palpable sense of excitement in the challenge that lay ahead, perhaps more so than in any other project subsequently undertaken. As well as the lists of repairs needed to make the house safe and usable, the restoration of the kitchens, the Boudoir painted surfaces, the cleaning of the Hall overmantel landscape, the painting by Roland Pym of murals, and the presentation of the rooms were described. From the very beginning the success of Castletown relied on volunteers, and the Society was careful to acknowledge and thank all those who came to clean the rooms and guide visitors. Clearly this was a lot of fun and in later years Ann Crookshank recalled the satisfaction she had in rolling slices of fresh white bread down the delicate walls of the Print Room in order to remove layers of grime.

Realising the limited appeal of even a house as great as Castletown, the Society was keen that the house become a vital part of cultural life in Ireland and be available to everyone from the very beginning. The Bulletins list all manner of performances held in the house, including those by the Chieftains, Siobhan McKenna, the Dublin Shakespeare Society, the Dublin Baroque Players and the Festival of Music in Great Irish Houses. In addition there were ‘musical picnics’, lectures, a planning conference and the well- publicised hunt balls, ensuring which ensured that the house came to life. Exhibitions relating to the decorative arts widened the appeal: in 1970 Patricia Cockburn’s shell pictures were shown; and in 1971, as part of Rosc, Patrick Hickey organised the Irish Delft display, which drew 1,000 visitors between October and December.

Furnishing Castletown was a primary objective for the Society. Desmond had of course bought the core of the original contents from the Conolly-Carews both before and at the 1966 auction, and these remained on loan until the late 1980s, when they were bought by the Castletown Foundation. These original items gave an authenticity to the displays, particularly in the Red Drawing Room— but with sixteen or more rooms open to the public, the overall impression was of an empty house. In 1968, Desmond wrote in the Bulletin about the difficulty of opening the house, how its character was bound to change and how “books propped open by old fashioned spectacles....help dispel the rusty atmosphere of the museum”. Lists of items that were required included leather bound books (“not necessarily readable”), items that came from Castletown, Irish ‘Chippendale’ furniture, silver and glass, maps and architectural drawings. These appeals were successful, and in this way, not only did the rooms regain some of their former appearance, but significant Irish and Continental pieces were introduced to the collection, including such as the Headfort suite and the Lucca Bed. While most of these were not original to the house, many of these items were fine examples of Irish furniture of the 18th or 19th centuries and in some cases very similar to items recorded in the early inventories. These gifts became part of the impetus to set up a charitable trust;, and hence the Castletown Foundation was established, as an educational trust, with an emphasis on the fine arts, to take over ownership and administration of the house, and continue the programme of restoration.

The purchase of the Lucca Bbed for £3,500 in 1971 from Geoffrey Bennison by the newly founded Dallas Chapter for £3,500, is indicative of the importance of the fourteen American chapters of the Society to the Castletown cause. The chapters in London, Chicago, Cleveland, Dallas, New York and Massachusetts in particular raised money, repatriated original items and gave other crucial gifts to the house. In addition, charitable foundations (for example, the John Brady Foundation, the Patrick and Aimee Butler Foundation, and the Lehmann Foundations), as well as scores of individuals, generously gave funds and items to the cause. The long list of those who donated generous gifts and loans has in recent years been recorded on donor boards in the east ground floor axial corridor at Castletown.

Over the years, as the Society developed, other campaigns dominated its agenda, but even after the office moved back to Leixlip Castle in 1983, the commitment to Castletown continued with events like the 25th Anniversary Silver Ball held in the house in aid of the restoration of the Green Drawing Room, which was also funded by the Chicago Chapter. This project was followed in 1989 by a major restoration of the Long Gallery, once again funded by the Chicago Chapter. During the lean years, when the house was owned and run by the Castletown Foundation, its income was derived from door receipts and the rents from six flats and the restaurant. This was not sufficient to maintain the building, and funds raised in America and the UK through the chapters were vital in keeping the house open. Just as important were the funds raised by the chapters (in particular the London Chapter) to help secure the original contents which that the Castletown Foundation had succeeded in purchasing from Desmond Guinness by 1988.

Perhaps the greatest continuing legacy for the Society at Castletown are its important furnishings, which are displayed in the house. Most of these were conditional gifts made through the Society to the house, where they continue to embellish and educate. What better way for the Society to continue its involvement in one of the great Irish conservation success stories?

Christopher Moore was a member of the Castletown Foundation 2000-2018, and Chairman 2013-18, and is now is a Patron of the Foundation.

This article is taken from the 2018 edition of the Irish Georgian Society Review, our annual members' magazine.