The Loss of a Georgian Gem: Vernon Mount, Co. Cork

A once great house from an epoch that resonated with the stirrings of national self-determination in America and France, and with a hidden but rich cultural history spanning three continents, was engulfed in flames in July [2016]. Visible over a sizeable part of Cork City, the fire itself drew thousands of onlookers – the historic Vernon Mount burned on its steep escarpment overlooking Cork. 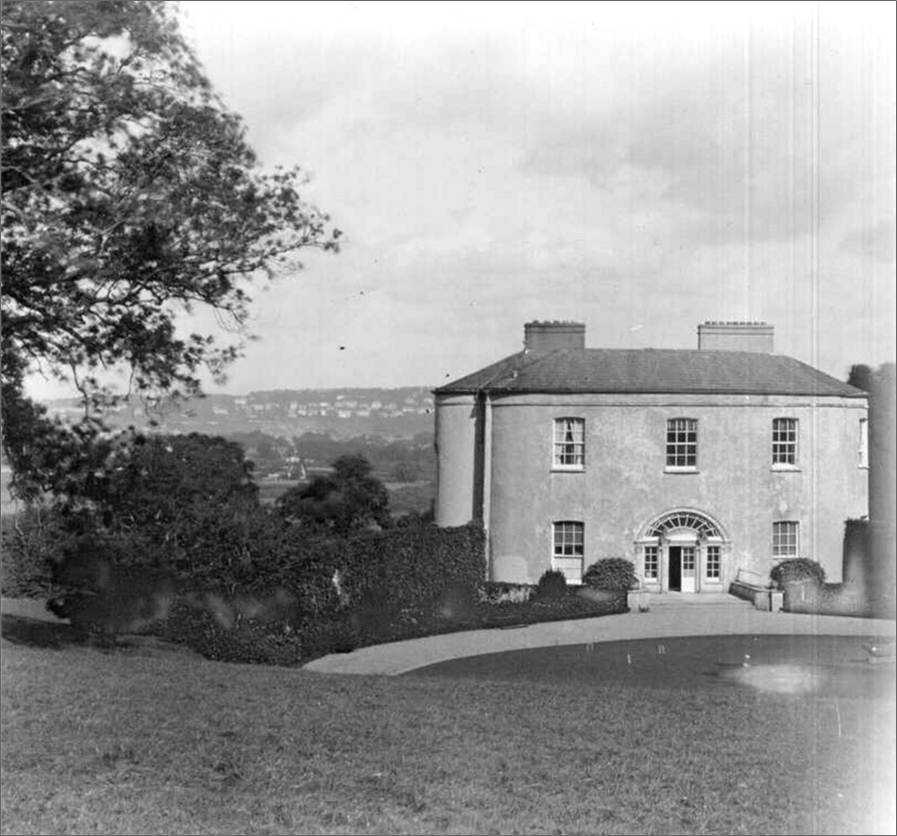 Many people compared the impact of the fire on the community to the inferno which destroyed the old Cork Opera House in December 1955. There was shock and outrage that such a calamity had been visited on such a well-known and loved landmark, by an act of wanton vandalism.

The vast numbers who observed its demise were a far cry from the packed attendance at the initial public meeting held on a November evening in a local church hall in Douglas village seven years previously. There, the first germ of the idea of restoring the grand old house came to life as part of the creation of a park that would connect suburbs and city on the former city landfill that faces Vernon Mount.

At that meeting, the ad-hoc organising committee had prepared a presentation, and invited guest speakers from both City and County Councils. This co- operative approach was to become a feature of the campaign, and the meeting unanimously approved the proposal for a renovated Vernon Mount connected to the new park. The meeting was just the first of many such public engagements with the local community and quickly drew a wider audience both online and off. 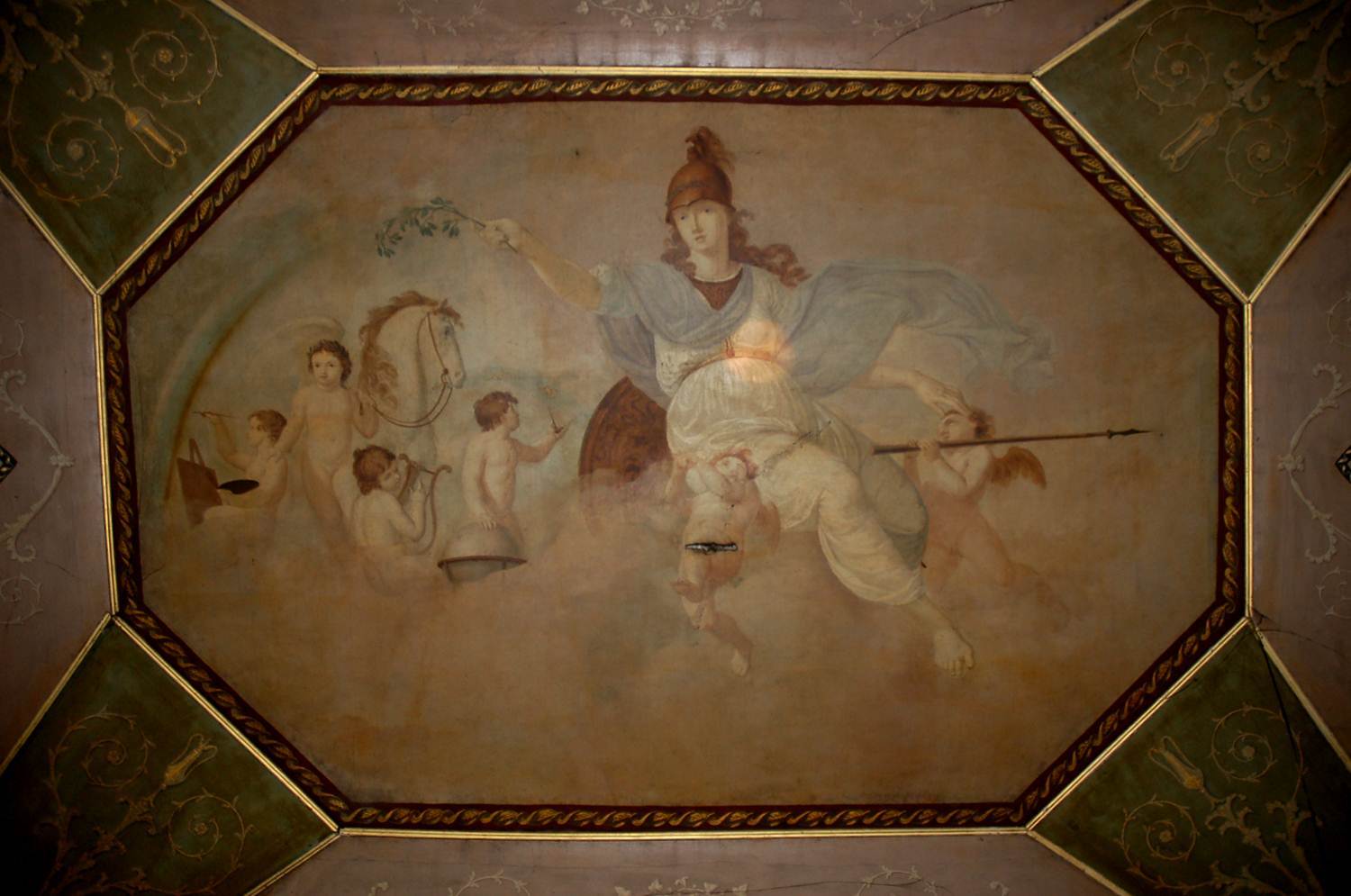 Minerva casting away the spears of war’, formerly mounted on the ceiling of the drawing room, painted by Cork artist Nathaniel Grogan (1740-1807) - now lost. (Image taken by IGS in 2008)

Early in the process, the group – now named the Grange Frankfield Partnership (GFP) – developed its strategy to include three key and interlinked components; an extended park to incorporate open space lands on the escarpment to the south of the capped city landfill and located in Cork County, the creation of a cycleway/walkway route linking both land units and necessitating the construction of a ‘green bridge’ over the separating N40 motorway, and the jewel in the crown – the incorporation in the extended park of Vernon Mount House as an iconic feature of outstanding heritage and cultural value.

Within a year, after plenty of groundwork and lobbying, the group met the then Cork County Manager, Martin Riordan. After an initially cautious reception, discussion warmed to the point where he was complimenting a well-constructed strategy.The meeting ended with a commitment to help the endeavour in whatever way he could.

This success in drawing support from the Council was to result in the extension of the park planning study on the city landfill to the adjacent County lands, thereby producing a physically integrated plan and in the process dramatically changing the context and setting of Vernon Mount. 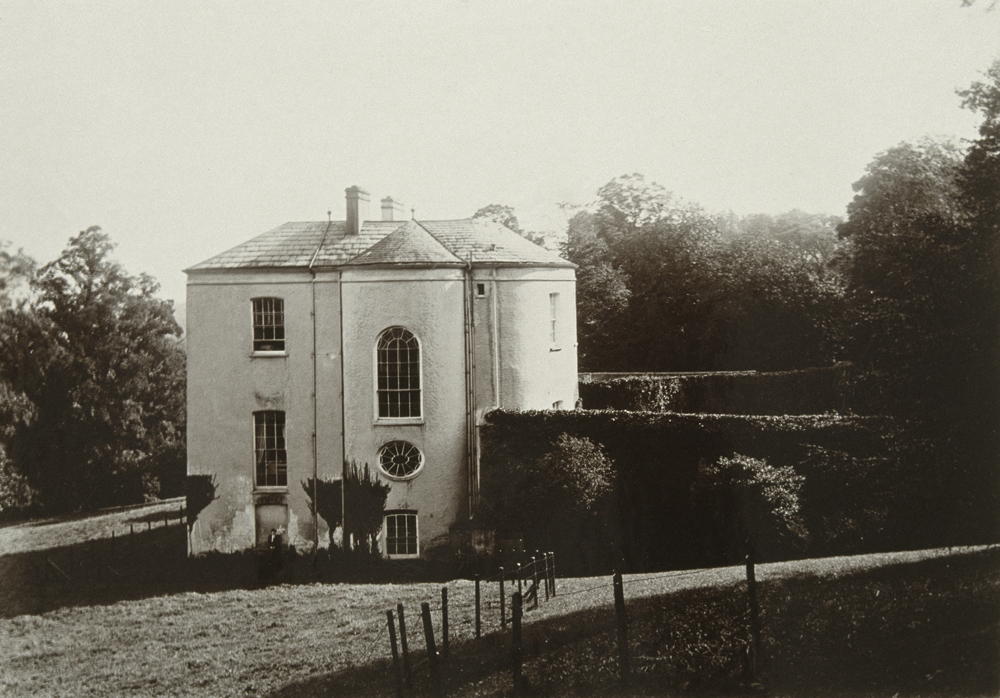 That leap forward led to the design of the proposed cycleway/walkway, including over-bridge, and the acquisition of land at the southern entry point. In addition, significant publicly funded restorative works commenced on the roof of Vernon Mount House, the structure having become endangered by deterioration and weathering. Central to the success of the project was the early appearance of a benefactor, whose generous support funded the design and printing of initial flyers, attractive display panels, professional PR assistance, and the creation of an informative and attractive website (www.vernonmountpark.ie).

The Vernon Mount Lecture Series, enthusiastically supported by Douglas Library, was a key part of engaging the public in the initiative and has been an unqualified success. It maintained a permanent focus on the house, maintaining public interest and support for conservation of this singular building. GFP in recent times was on the crest of a wave as a result of a deeper engagement with the Irish Georgian Society. Through GFP’s website, contact had also been made by the custodians of Mount Vernon, George Washington’s ancestral home in Virginia, USA, and a commitment elicited to help our efforts in Cork. 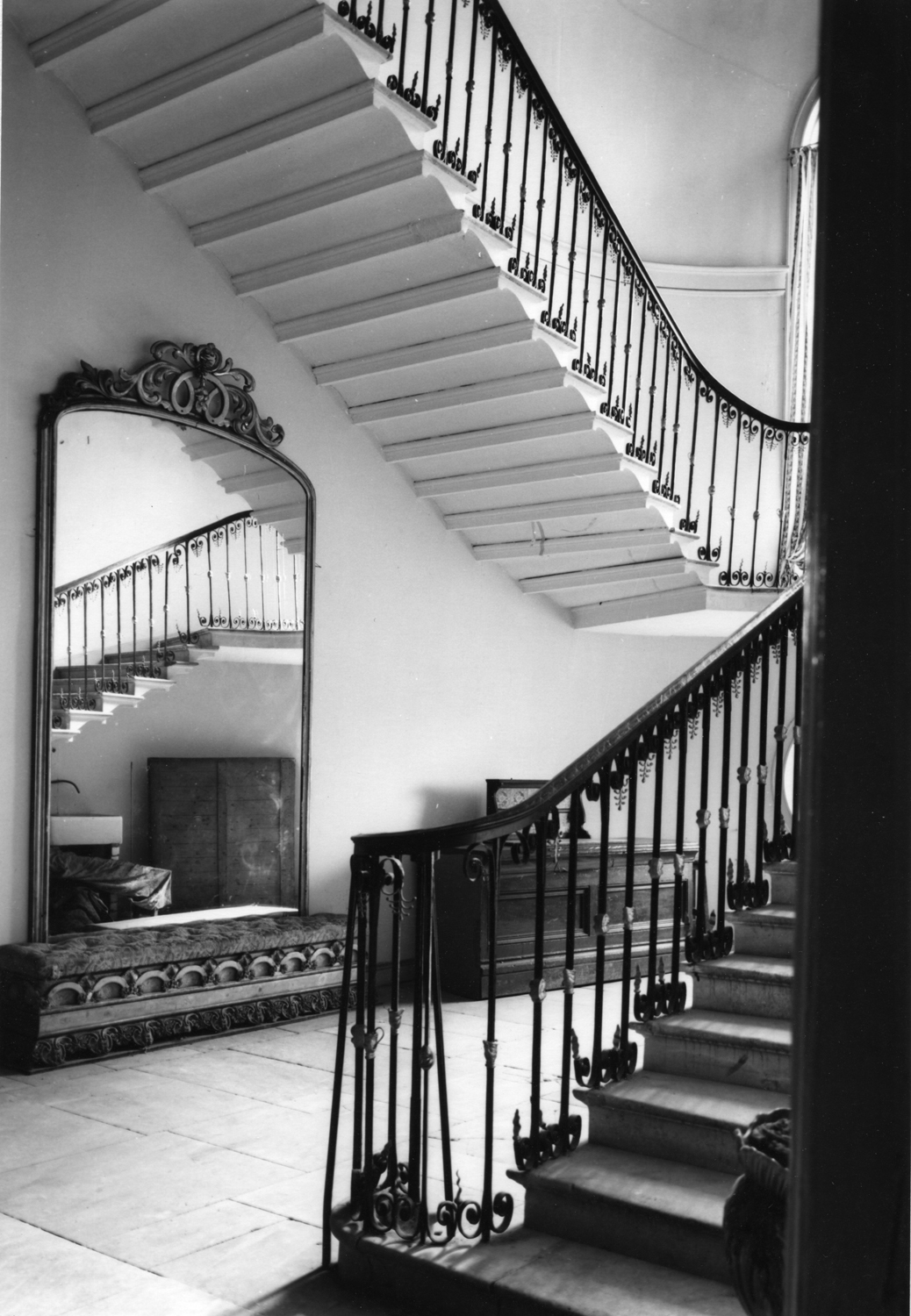 Lobby of Vernon Mount (Courtesy of the Irish Architectural Archive)

The key barrier to restoring Vernon Mount was the intractable difficulty of engaging meaningfully, if at all, with the owners of the house. Their indifference impeded not only a sustainable future for the house, but also an adequate regime of maintenance and security as it lurched from one crisis to another.

A most disturbing sign of the continuing threat to the house came shortly after the roof was repaired in 2012, when youths entered and accessed the roof itself. Although apprehended by the Gardai the threat remained as the sealed windows and doors became a constant target for vandals. GFP was painfully aware that time was not on its side as it ramped up its efforts to gather sufficient support to convince the public authorities that unless drastic measures were taken to protect and preserve the house, it would not survive. We made strenuous efforts to bring other organisations in to help with this shared ambition. 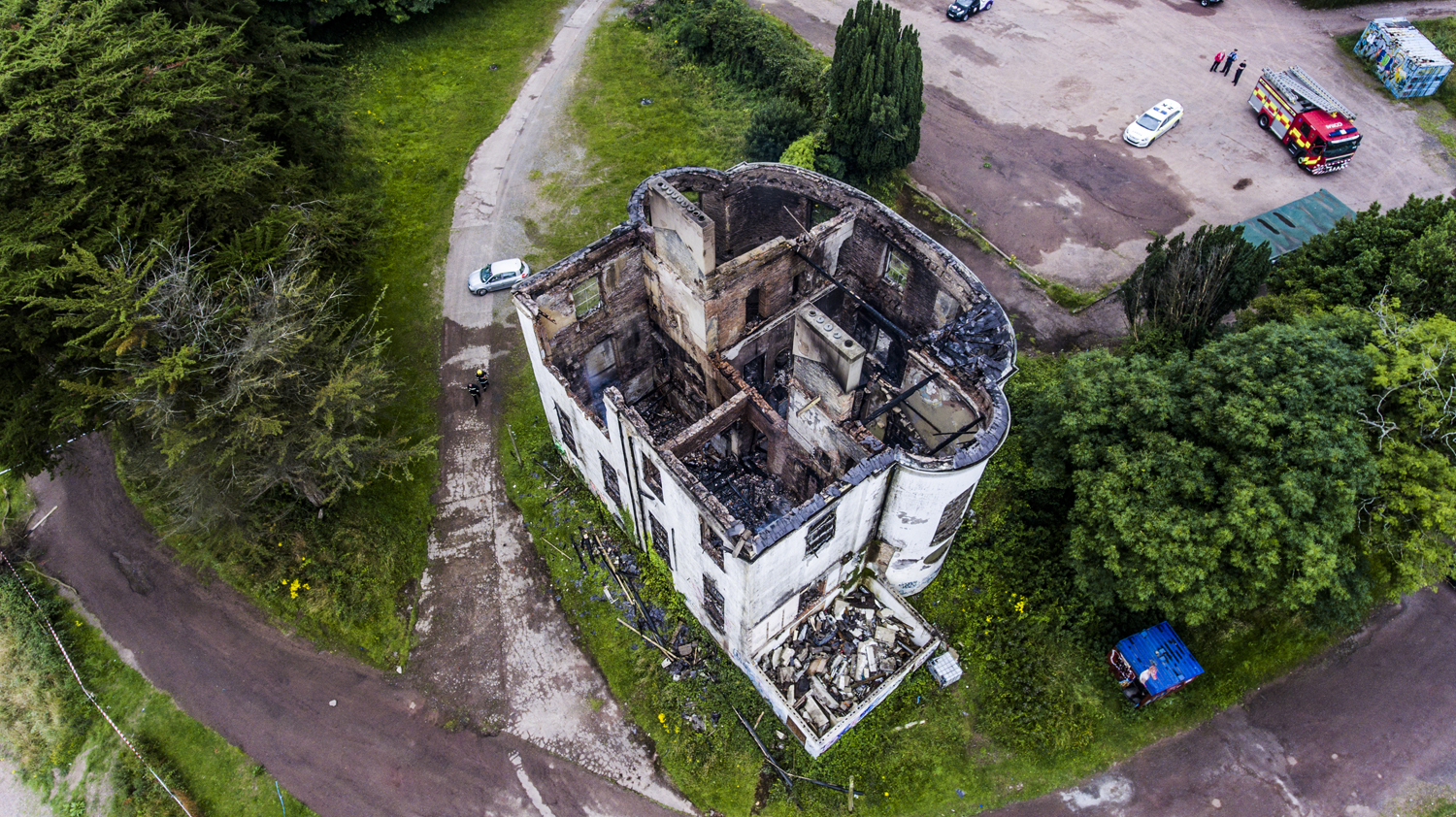 The enigma remains as to what might have been. Faced with the usual panoply of threats that endanger many protected heritage buildings, namely the:

- incapacity or indifference on the part of owners
- reluctance of planning authorities to become too financially or legally embroiled
- uncertainty of State involvement
- limited resources of conservation NGO’s and semi-states
- erratic popular interest and support for conservation
It will require a monumental and persistent effort to succeed.

Ironically none of these factors hindered GFP’s progress, as focussed action won friends and influenced people and organisations. Sincerity and persistence of effort were rewarded by generous help, support and advice from all quarters. In the end, it wasn’t lack of money that undid our efforts, rather the indifference of the owners to its legal obligations to safeguard the house, an exceptional failure by the local authority when alerted to the impending disaster, and society’s apparent ambivalence to ongoing vandalism.

All is not lost, however, and both GFP and IGS believe a diamond still exists in the ashes – the graceful, curvilinear shell of the house must be saved. It should continue to stand as a monumental vestige of a once great house of an epoch whose revolutionary history resonates in the centenary year of our national commemoration.

Thank you to Tony Foy and Brendan Kelleher of the Grange Frankfield Partnership for co-writing this article. This article is taken from the 2016 edition of the Irish Georgian Society Review, our annual members' magazine.