‘Vain Transitory Splendours’: The Irish country house and the art of John Nankivell

Elizabeth Bowen wrote in Bowen’s Court that Ireland is a country of ruins that “feature the landscape” whether “Lordly or humble, military or domestic, standing up with furious gauntness… or shelving weakly into the soil”. She saw in them an implicit truth: “a ruin stands for either error or failure, and in this country are accepted as part of life”. The desolation of country houses and their demesnes would, by then end of the 20th century, become an all too familiar part of the Irish scenery: miles of crumbling stone walls interrupted by the casual insertion of bungalows, abused entrances with toppled piers and twisted ironwork, bramble engulfed lodges,, deeply-rutted carriage drives leading aimlessly through a wasted park, amidst a few bereft resilient trees— looked upon forlornly by the gutted house, a still-proud block staring, blindly out over the scene “in fright and amazement at the wide light, lovely, unloving country, the unwilling bosom whereon it was set”. 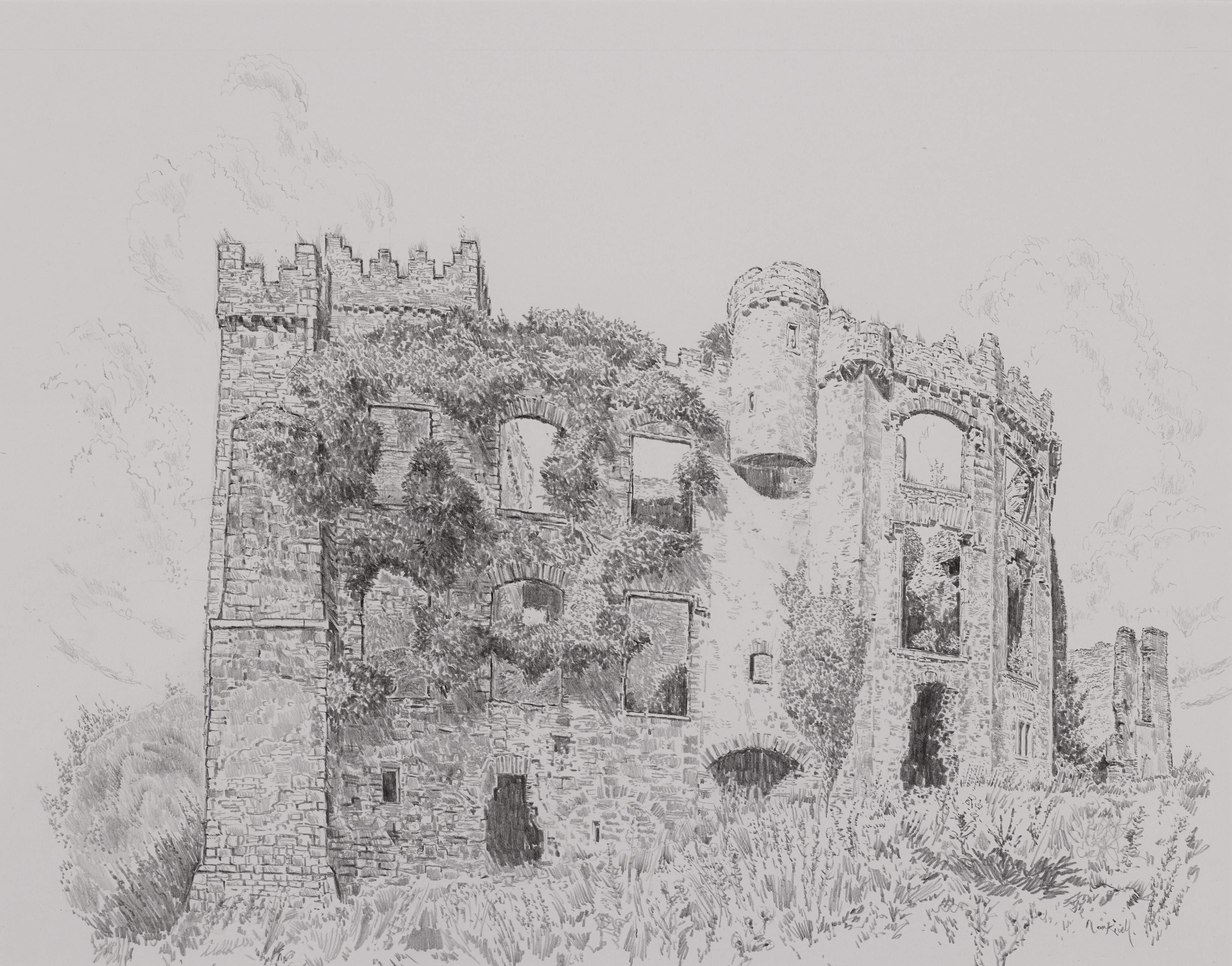 Once a constant in the landscape, with a seeming eternal presence and authority that offered stability with its paternal customs, focused on a largely pliant and dependent community, the Irish country house eventually became “vain transitory splendours”, no longer immune from the vicissitudes of life, the passage of time, or the powers of nature. As the old order was turned on its head, the buildings and their demesnes were quickly transformed into the “visual and cultural apparatus” of a social system that was vanishing, an anachronism that needed no replacement in the modern age, and were thus bound to succumb to the eventual process of being “naturalised to the soil”.

The true extent of the architectural losses accruing in a distinctly apathetic age was made all too apparent across the pages of Vanishing Country Houses of Ireland, a book published jointly by the Irish Architectural Archive and the Irish Georgian Society in 1988. Coinciding with the publication, an exhibition at Kyburg Gallery in London, organised at the instigation of the late Knight of Glin, brought to light - a series of arresting drawings of Irish houses and castles by the distinguished English artist John Nankivell. This was the culmination of more than two decades of travelling in Ireland, recording the sad decline of Irish architectural heritage. What began as fleeting glimpses of distant, decaying ruins from his parents’ car, as they explored Ireland on family holidays, had gradually resulted, year-by-year, in a remarkable collection of pencil-drawn views that are at once romantic and atmospheric—, as well as saddening (to those who cared) and reproachful (to those that didn’t) - love songs to the fast-fading glories of the Irish country house. The sense of poignancy and pathos embodied in these buildings are subjects that naturally appeal to the artist. To the aesthete, ruins have the potential to become beautiful with the passage of time, especially once the precise events and circumstances that led to decay or destruction become fading memories or have been lost in their myth-embroidered stories - or until a disinterested observer like John Nankivell, passionate and concerned about architecture, comes along and praises them in art. And in Irish visual art, no one has ever exploited this more effectively and thoroughly than Nankivell. 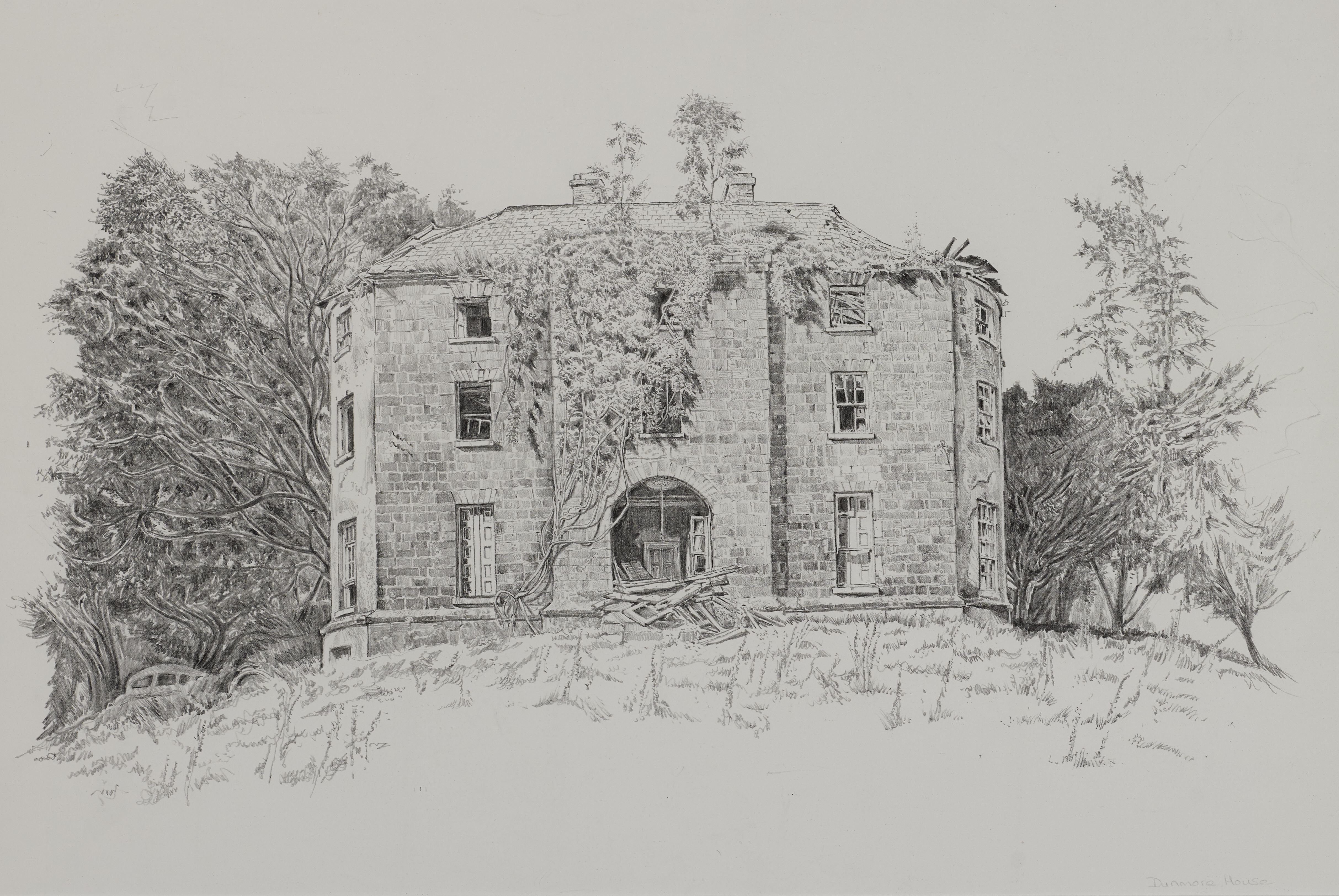 Fortunately the ‘consecrating hand of time’ has changed attitudes; the old wounds were slowly healed as negative sentiment moved towards a more benign nostalgia, and so on to the present, where now interest in the Irish country house is now part of the serious business of academic research and professional conservation. By the time Vanishing Country Houses was published, there were already indications of a turning tide as political and social life in the new Republic become settled and secure, moving to an acceptance that these houses were, as Yeats argued in his poem Purgatory, “bricks and mortar possessed by history” and so, intrinsically Irish, and thus part of a greater Irish cultural heritage. Just as the country house, in dying as a social actuality, was becoming sanctified in Irish literature, in the poems of Yeats (and also of John Betjeman, one of Nankivell’s earliest admirers) and the novels of William Trevor, Aidan Higgins and Jennifer Johnston, so too was its spirit being revived in Nankivell’s drawings – suitably redeemed and memorialised as great works of art. Now, through the generosity of Susan and Coleman Burke, all the drawings have been brought together in Ireland for the first time, in an exhibition at the former City Assembly House in Dublin, where the core of the collection will be retained to form part of the Irish Georgian Society’s permanent collection.

This text is based on the introduction to the catalogue that accompanied the exhibition, and is taken from the 2018 edition of the Irish Georgian Society Review, our annual members' magazine.

You can purchase some of John Nankivell's drawings from our online shop here.